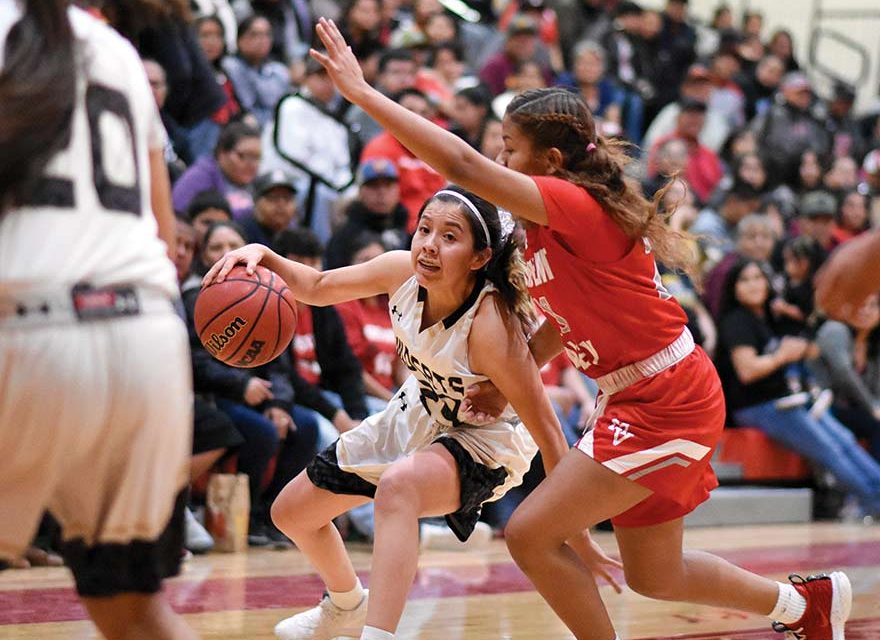 Navajo TImes | Ravonelle Yazzie
The Chinle Lady Wildcats needed an overtime session to secure a 61-58 win over the Monument Valley Lady Mustangs during the first round of the 3A North Regionals Basktball tournament.

The Chinle girls’ basketball team needed a little more time to finally put away the Monument Valley Lady Mustangs on Thursday night in the opening round of the 3A North tournament.

As the tournament’s No. 3 seed, the Lady Wildcats outlasted No. 6 Monument Valley in a 61-58 overtime thriller with senior Stacey Begay delivering an all-star performance in the overtime session.

The Wildcats will take on No. 2 seed Tuba City in today’s semifinals at 3 p.m. at the Hornet Pavilion in Burnside, Arizona.

In the other opening round game, the Ganado Lady Hornets staved off a couple of rallies from Window Rock to post a 63-47 win.

The losers in Friday’s game will play for third place at 10 a.m. on Saturday while the championship game is scheduled for 5:30 p.m. Daily admission for the tournament is $8 with children 3-and-under free.

Begay, who finished with a game-high 25 points, scored all nine points for Chinle in the overtime session. Her biggest shot came at the 13-second mark when she hit a baseline trey that gave the Wildcats a 59-58 advantage.

“Honestly, I was wide open so I took a chance and sure enough it went in,” Begay said. “I kind of got excited about (making that shot) but I didn’t want to show it because the game wasn’t over.”

It certainly wasn’t as MV tried to push the ball up the floor but Begay helped force a turnover at midcourt. In their ensuing possession, she hit two free throws for the three-point win.

“This feels good and this is definitely a confidence booster,” she said.

Chinle coach Francine McCurtain said Begay’s three-point shot served as a dagger as her team had to overcome MV’s 1-3-1 defense for much of the night.

“Stacey is one of those players that we need the ball in her hands,” the Chinle coach said. “She knows when to take over and that is what she does. And you know the girls have a lot of confidence. They give her the ball and she goes to work.”

In this seesaw affair it looked like Chinle would end it in regulation as they took a 49-45 lead with 1:06 remaining on two free throws by Grayce Claw.

But MV staged a marvelous comeback by going on a 7-3 run with Mustang senior Tayla Nez igniting the run with a trey as they trailed 49-48 with just under a minute.

With the lead, Chinle tried to milk the clock as MV was forced to foul. That scheme nearly worked as the Wildcats went 3-of-6 at the foul line, opening the door for MV.

The Mustangs hit a pair of buckets, including the game-tying layup by sophomore Adriana Sheppard with two seconds left in regulation.

“Free throws always matter and tonight it came down to free throws,” said McCurtain, whose team went 13 for 20 at the charity line. “We just didn’t finish it in regulation but we were able to finish it out in overtime.”

Claw, who scored 15 points, said her team stayed composed, especially in the OT session to pull it out.

“It got intense but we stayed calm,” she said. “Coach just told us to work for a good shot but mostly it was our defense that got the job done.” 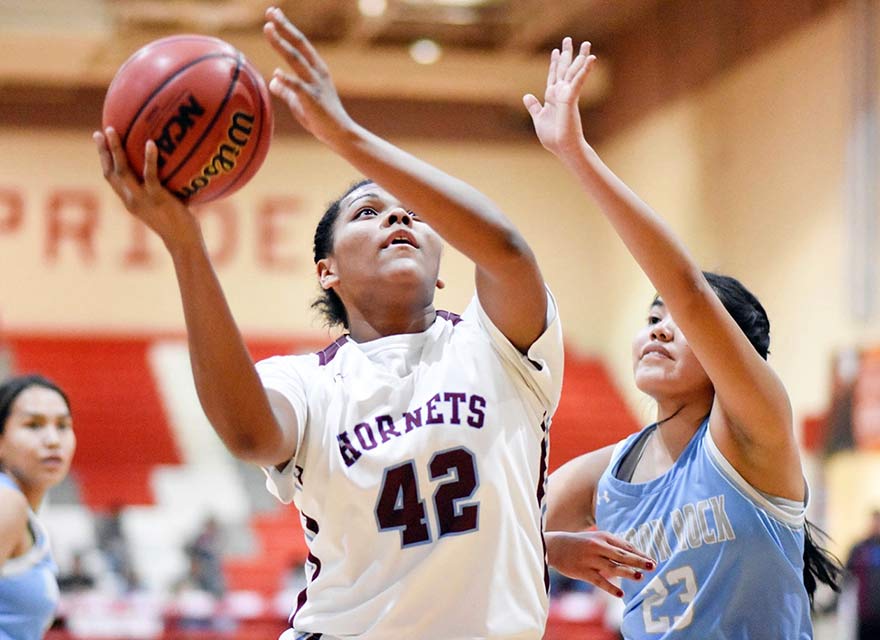 The Ganado Lady Hornets defeated the WIndow Rock Lady Scouts during the first round of the 3A North Regionals Basketball tournament at Monument Valley HIgh School on Feb. 7.

The Lady Hornets relied on their go-to players to get by Window Rock with junior post Michelene Coleman leading the way with 23 points. Senior Jayla McIntosh added 17 while sophomore guard Abigail Benally chipped in eight.

“Our big 3 – Jayla, Michelene and Abigail – stepped it up for us,” Ganado coach Mike Bitsuie said. “They carried us tonight.”

After leading by as much as 11 points at the start of the second half, the Hornets had to fend off a couple of runs from Window Rock to stay ahead.

The Scouts hit some key buckets to cut that 11-point deficit down to 39-33 with a 7-2 run. Bailey Talkalai started the run with a putback and junior Jana Solee capped the rally by going on a personal 5-0 run.

Midway through the fourth, the Hornets did go up 51-40 on a trey by Deana Curley but the Scouts made another run, getting as close as 46-40 on a bucket by Solee.

“It was our turnovers and miscues,” Bitsuie said. “We were letting them stay around because of our mistakes. We gave them some transition opportunities, which led to wide open threes.”

Solee led Window Rock with 19 while Talkalai finished with 15 and Asia James added 13.