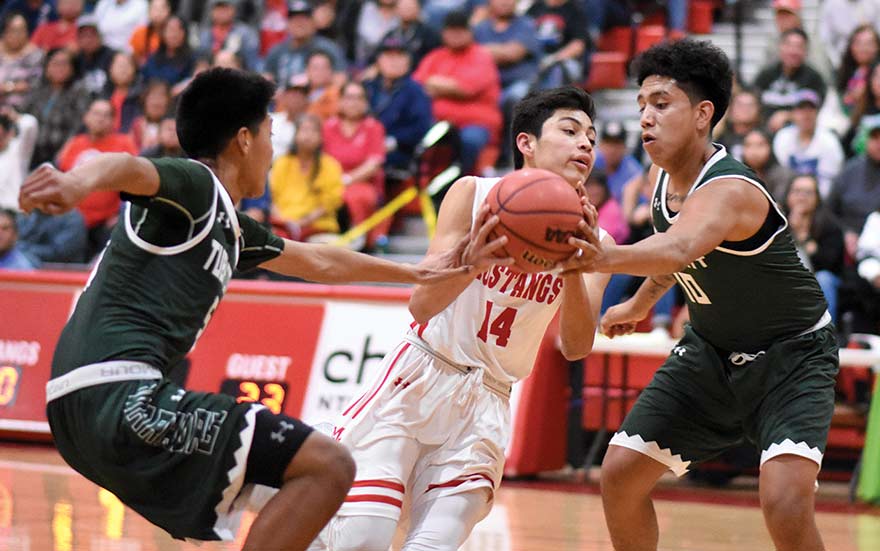 Navajo Times | Ravonelle Yazzie
A late push in the fourth quarter gave the Monument Valley Mustangs a separating they needed to post a 64-58 game on Feb. 7.

The lower-seeded teams in the 3A North boys’ basketball tournament gave fits to No. 3 seed Monument Valley and No. 4 Window Rock on Thursday night.

Monument Valley pulled away from No. 5 seed Tuba City by a 64-58 count while Window Rock erased a five-point halftime deficit and posted a 61-37 win over Ganado.

At 4:30 p.m. today, the Scouts will take on No. 2 seed Page at the Hornet Pavilion in Burnside, Arizona.

The Mustangs, meanwhile, have the tall task of playing top-seed Chinle at 7:30 p.m., also at the Pavilion.

The final day of the tournament will be played at the Bee Holdzil Fighting Scouts Events Center in Fort Defiance on Saturday. The third-place match is scheduled for 11:30 a.m. and the championship slated for 7:30 p.m.

While trailing 40-38 at the start of the fourth quarter, the Mustangs got the separation they needed to pull out the six-point win on Thursday night.

MV went on a 16-4 run that took two-and-half minutes to complete as they nailed three treys with Dahntay Dugi, Hunter Nez and Andrew Sheppard each nailing a trifecta.

In addition to his trey, Sheppard scored five points during that rally as his old-fashion three-point play gave MV a 51-44 cushion with 5:55 left. Dugi stretched that lead to 10 with another dagger from beyond the three-point line.

“We were missing a lot of our shots and that’s not normal for us,” MV coach Jacob Nelson said. “I have shooters on my team and that run was really big for us. It got their confidence going.”

Before that surge, both teams played fairly even for much of the contest. The largest lead in the opening half was seven when Tuba City got an inside bucket from sophomore Trey Begay for a 23-16 advantage with 1:27 left in the second quarter.

But in the closing moments of the opening half, the Mustangs scored eight straight points as they led 24-23 at the break. Four of those points came off free throws just as time expired.

The Warriors were charged with a blocking foul and a player questioned that call and was assessed a technical. Sheppard nailed those freebies.

Behind the crisp shooting from sophomore Jeremiah Byjoe, Tuba City opened up a 40-31 cushion. Byjoe nailed four treys with his last one coming at the 3:26 mark.

Byjoe led all scorers with 27 while Demetrius Daw and Engle both finished eight points apiece.

For MV, Sheppard led the Mustang attack with 19 points. Nez added 10 and Dugi had nine.

“I have some awesome shooters on the team but the seniors on the team stepped up,” Nelson said. “They came in and played defense, covering that post for us because they had some taller guys on that team.” 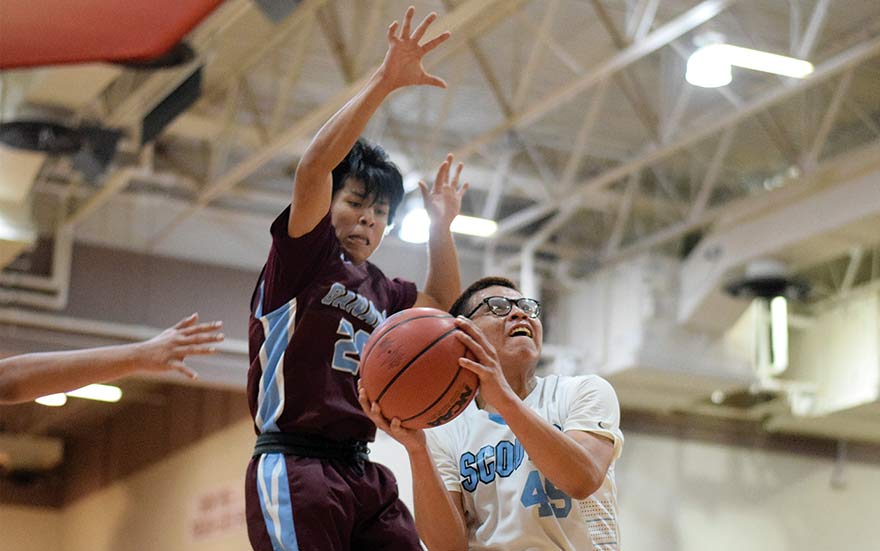 The Window Rock Scouts outscored the Ganado Hornets 41-13 in the second half to advance to the next round of the 3A North Regional Basketball tournament.

After trailing 24-19 at the break, the Scouts cut down on their turnovers and outscored Ganado 41 to 13 in the second half.

“The turnovers was the name of the game for us in the first half,” Window Rock coach Joel Harper said. “We couldn’t quite hang onto the ball, which gave them opportunities.

“In the second half we cut down on our turnovers and we got rebounds,” he said. “Once we did that our boys picked it up and, when we started to make some shots underneath, it changed the tempo of the game.”

After the break, the Scouts converted a pair of Ganado turnovers and tied the contest at 26-all on a trey by senior Trevor Herbert with 4:55 to go.

On their ensuing possession, Window Rock took the lead for good with senior Burk Williams scoring on a nice in-bounds play. Williams later added a trey for a 38-29 cushion, heading into the fourth.

For Ganado, Lane Uentillie finished with 14.