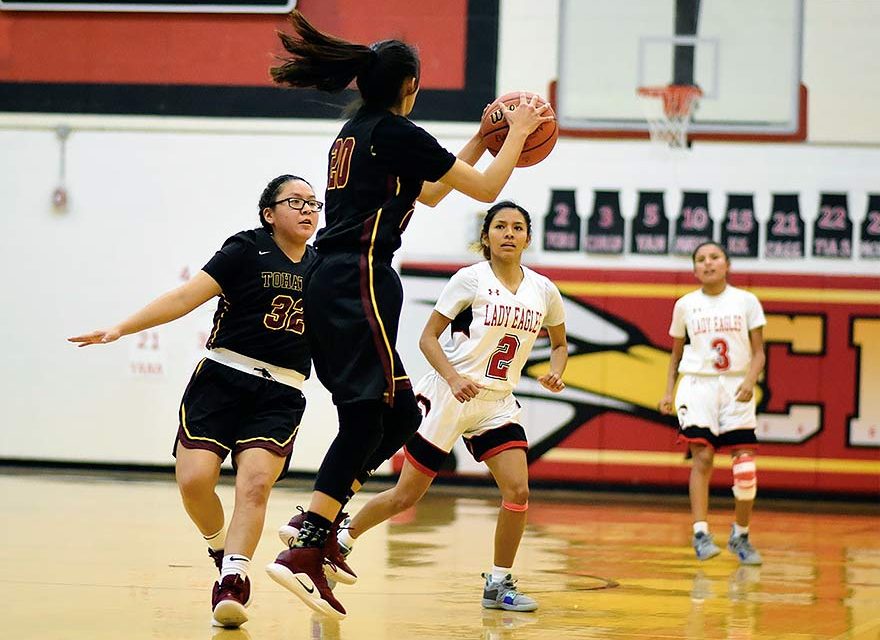 Navajo Times | Ravonelle Yazzie
Tohatchi Lady Cougar Cameron Tsosie (20) makes a steal against the Crownpoint Lady Eagles on Thursday night. The Lady Cougars defeated the Lady Eagles by a 47-27 count in a District 1-3A contest.

The district season reached its midway point on Thursday night in District 1-3A girls’ basketball and with the league’s top seed at stake the focus centered on the Crownpoint and Tohatchi contest.

Going into the game, Crownpoint was leading the league with a 4-0 record but the Lady Cougars snapped their winning streaking with a resounding 47-27 win.

After leading 22-18 at the break, the Cougars took control of the game as their defense and crisp passing wore down the Eagles.

“We try to take pride in that,” Tohatchi coach Tanisha Bitsoi said of their defensive effort. “That’s what we do, we play good defense.”

Coupled with Navajo Prep’s 78-52 win over Zuni on Thursday night, the district has three teams – Crownpoint, Navajo Prep and Tohatchi – with identical 4-1 records.

“I have to admit that the district has been tough,” Bitsoi said. “But I feel like we’re going in the right direction. If we can touch up on a few things here and there we can be better.
We’re just not quite there yet.”

In Thursday’s win, the Cougars forced the issue with their defense but in the opening half they had a tough time capitalizing on those extra possessions.

“Early on we had our opportunities but we struggled offensively even though we were turning them over,” Bitsoi said. “We couldn’t get going offensively but I thought as we got more composed we started making those extra passes and the girls were making shots.”

Junior Cameron Tsosie got things rolling for the Cougars as she opened the third quarter with a trey and an old-fashion three-point play.

Tohatchi added another three-point play from Sarah Begay for a 31-18 cushion with 3:39 left in the period.

After a basket by Crownpoint’s Candace Vandever, Tsosie ended the quarter hitting a pair at the line for a 33-20 advantage.

“We were kind of off in that first half with our defense,” said Tsosie, who led Tohatchi with 10 points. “Our defense is what makes our offense flow so when we played better defense it made thing a little easier for us to get our shots.”

A three-point basket by junior Gabrielle Thomas (seven points) gave the Cougars a 36-20 edge at the start of the fourth stanza as the margin was stretched to as much as 22 points late in the fourth quarter.

“We honestly made too many mistakes,” Crownpoint coach Khadijha Jackson said. “We were trying to force things that were not there so things started to snowball for us in the second half.”
Jackson said the game plan going in was to look inside but every time they broke Tohatchi’s press they couldn’t find a connection.

“Their defense was beautiful but we were doing too much on our side,” she said. “We were dribbling too much. After the game that was what the girls were saying.”

In the opening half, the Eagles led only once on a transition lay-up by Vandever, as she finished with a game-high 11 points. The junior guard tied the contest at 5-all with a trey before Tohatchi closed out the quarter on a 4-0 run.

In the second, the Cougars staked a 17-7 cushion midway through the quarter on a three-pointer from Candice Dean but Crownpoint chipped away at that lead with sophomore Amaya McMillian scoring five of the Eagles’ final 11 points of the half.

With her team trailing 22-18 at the break, Jackson was hoping to carry over the momentum in the second half, something they did during their four-game winning streak.

“In thought we could pull it out but we were not on the same page,” she said.

With it being their first district loss, the Crownpoint coach said they need to go back to the drawing board as they start the second half of the district, playing at Navajo Prep on Tuesday.

“This is a tough pill to swallow but we can get over this,” Jackson said. “Our focus right now is on Tuesday and that’s going to be our determination game. We need to come out the same way we did at the start of the district season.”