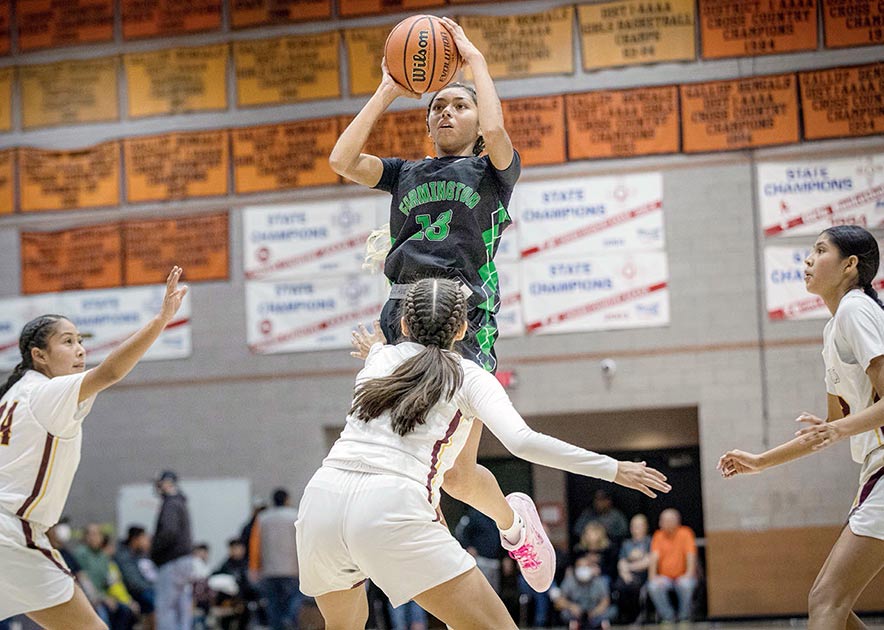 Class 5A Farmington delivered a quick knockout punch of Class 3A Tohatchi Saturday during the championship finals of the John Lomasney 47th Annual Gallup Girls Invitational.

The unbeaten 5-0 Lady Scorpions unleashed a suffocating, collapsing double-team defense to smother the Lady Cougars 53-25 that left little doubt which team was the class of the annual three-day girls basketball tournament.

The tournament honors the legacy of former Lady Bengal head coach and Hall of Fame coach Lomasney, who passed away in 2011 at the age of 63.

Lomasney, who was considered one of the giants in state coaching circles, guided Gallup for four state titles and a pair of state runner-ups during a glorious 28-year span at Gallup while compiling a 503-187 career record.

“Our defense was exceptional,” Adair said whose team forced Tohatchi into 24 turnovers – 18 coming in the first half – that set the tone early. “We just played really well. Our kids work very hard. They’re so teachable. I’ve got the best leadership I’ve ever had. But Tohatchi is scrappy. She’s (Tanisha Bitsoi) an awesome coach. Tohatchi’s going to give you everything they got. They don’t stop. She’s an excellent coach. They’ve won state. She’s got scrappy players.”

Farmington never trailed in the tournament finals bolting out to a quick 7-0 lead led by senior guard Kamalani Anitielu, who accounted for five of those points. Tourney MVP junior power forward Kapiolani Anitielu then took over and put up six of her game-high 26 points as the Lady Scorpions opened up a commanding 16-5 advantage and never looked back.

In the opening period Farmington hit on 8-of-21 shots while Tohatchi could muster just half of that with 3 of 11. Add to that eight turnovers which fueled Farmington’s title run.

By intermission, Farmington was firmly in control, 33-12 that was fueled by 18 Tohatchi turnovers.

A trey by Farmington senior guard Kaitlyn John put the Lady Scorpions up by 28 points, 42-14, over the 4-2 Lady Cougars, late in the third quarter.

The 5-foot-10 Kapiolani Anitielu, who looked flashy with her colored braids, buried her second and third treys of the game in the third quarter with 3:25 left in the fourth quarter for Farmington’s largest margin of the game 50-20 as the Lady Scorpions gave their first-year head coach an early Christmas present.

“I have my mom do my hair,” said Kapiolani Anitielu, who stood out with her hair pulled back in a unique braid that is topped off at the end with a splash of blonde. “I always ask if she could do it for me. I always like the braids. I liked how they looked on girls and I thought I could match it.”

Tohatchi was coming off a stunning 36-35 win over host Gallup in the semifinals Friday night on a last-second buzzer beater trey.

“I’m very proud of the girls,” said Bitsoi whose team knocked off 5A Piedra Vista 47-27 in the tourney opener. “They kept their composure. We ended up getting that last-second shot.”

Gallup was leading 35-33 with seconds remaining. Tohatchi senior guard Kiana Bia buried a dramatic 3 from the corner with just over a second left that put the Lady Cougars in the tourney finals.

The win over Gallup was Tohatchi’s second ever over the Lady Bengals with the first coming in 2017 when the Lady Cougars finished the season as 3A state champs.

Though admitting that Farmington would be one of the best teams they will face this season, Bitsoi, who returned her entire starting five from last year’s state semifinalist, said her team’s preseason schedule is always one of the toughest in the state with preseason games larger 5A schools like Volcano Vista, Farmington, and Piedra Vista, and 4A powers with Gallup and Kirtland Central.

“I tell the girls in order to prepare to be the best you gotta play the best. It’s our mentality and it’s for our own good.”

Through its first five preseason games this season, Farmington has breezed winning by impressive margins beating Gallup in its season opener 68-46 by 22 points, Durango, Colo. 53-30 by 23 points, Miyamura 63-27 by 36 points in the tourney opener and Montwood, El Paso, Texas 73-39 by 34 points in the semifinals.

Farmington, which lost in the 5A state semis to eventual state champ Volcano Vista will play at the Albuquerque Academy Invitational tonight facing Cleveland at 8:15 p.m.

“To be the best you have to play the best,” said Adair who has three returning starters. “It gets us ready for districts. Right now La Cueva is ranked ahead of us and Sandia is ahead of us and they’re both in our district so we’ve got a tough district.”

Adair, who coached the past nine years at Bloomfield along with stints at Kirland Central as the AD and the football coach at Cortez, Colo., said he’s glad to be back at Farmington High School, where he did his student teaching back in 1986.

“I just live nine miles from Farmington High and 30 miles from Bloomfield. This (job) opened up and I applied. I love Farmington. I love the administration, They support me but they support my kids. That’s the best of all the school systems that I’ve been in, Farmington is by far the best.”

Tohatchi will visit Escalante Saturday. The Lady Cougars will host Farmington in a rematch January 5th.