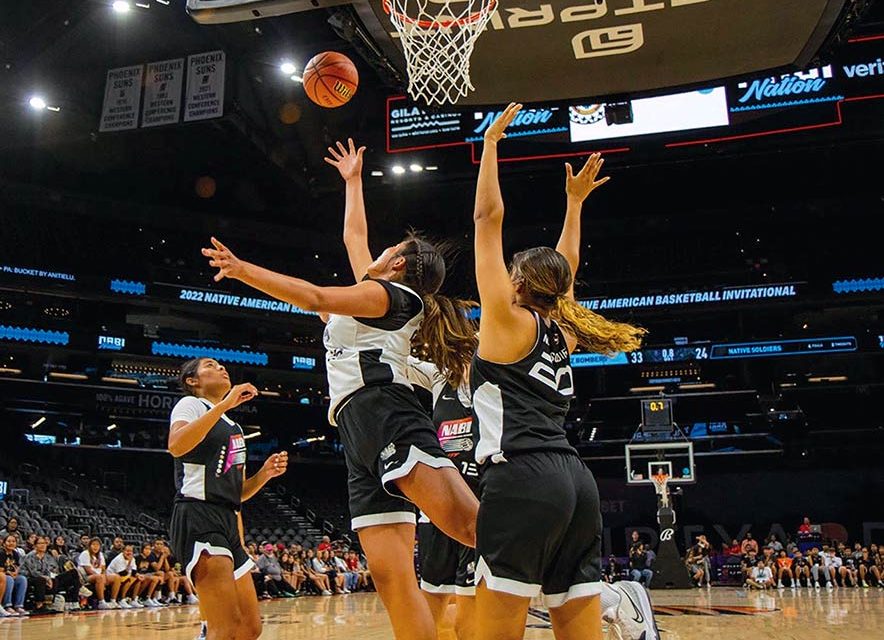 Special to the Times | Cyrus Norcross
Rezbombers Gracelyn Nez (24) scores a reverse layup with under one second to go in the first half of the NABI Championship game on July 23.

The 1-2 scoring punch of Kiiyani Anitielu and Gracelyn Nez helped lift the Rezbombers to the championship title at this year’s Native American Basketball Invitational.

The duo combined for 49 points with Anitielu scoring 25, as the Rezbombers defeated Florida’s Native Soldiers 70-51 at the Footprint Center in downtown Phoenix.

The Farmington High graduate put in 16 of her points in the opening half while Nez chipped in 15.

“We kind of kept Gracelyn hidden,” Kaye said. “We saved her a little bit for this game and she showcased the talent she truly has for the game of basketball.

“I know she’s a volleyball stud, but she’s also a basketball star,” Kaye said of the Flagstaff High graduate. “The rebounding that she provides is simply amazing. I don’t feel that anyone can jump with her, so she’s just amazing.”

Defensively, the Rezbombers coach singled out guard Aaliyah Garcia for her play. 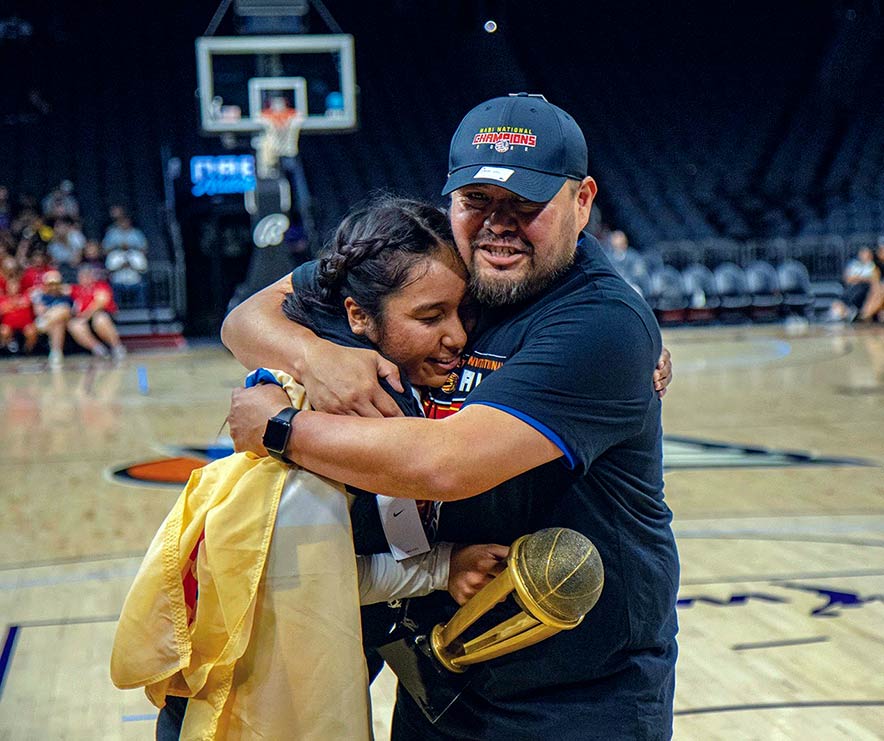 “Aaliyah Garcia is like our defensive monster,” he said. “She sets the tone defensively, and once she gets going everybody else just follows right in behind her.”

After a nip-and-tuck start, the Rezbombers used its defense to close out the first half on a 12-0 run for a 35-24 lead, which included a buzzer beater from Nez as she took the inbounds pass from midcourt with 1.5 seconds left.

The Arizona-based team carried that momentum into the second half as they upped the lead to as much as 22 points.

“We did a little bit of film session, and we studied habits,” Kaye said of prepping for the second meeting with the Native Soldiers.

In last Friday’s semifinals, the Rezbombers eked out 53-47 win over the Florida team.

Kaye said his club did what they could in trying to neutralize Native Soldier guard Carly Keats, who finished with a team-best 22 points.

“Carly is their go-to player,” he said. “I felt that if we could stabilize her, our chances were very good.”

And while Keats scored 13 in the opening half, she was held in check for much of the second half until she put in four straight points in the games last 36 seconds.

“She got away from us a little bit in the first half,” Kaye said. “I’m not sure what she scored in the second, but we kind of limited her.”

With Keats being limited, Native Soldier post Josie Hill kept her team afloat by scoring 15 of her 19 points in the second half.

Those points were hard earned as the Rezbombers double-teamed every time she got the ball inside with Miquedah Taliman (Page), Lanae Billy (Piedra Vista) and Nez defending her.

“Lanae played a huge part of this team and she did extremely well,” Kaye said. “I feel like she was the piece that we were missing the last three years.”

In their three previous trips to NABI, the Rezbombers made it as far as the Final Four.

In a strange twist, it was Billy’s New Mexico Elite that eliminated the Rezbombers from further play during last year’s tournament.

All told, Billy has been on the winning team in the three NABI tournaments she’s played in. The first two were on the New Mexico Elite team.

“It’s exciting, especially if you done it three times,” said Billy, who signed with Fort Lewis College earlier this year. “With it being a new team, it’s even better. I got to know more people and it was just a good experience with these girls.”

While echoing her coach’s assessments, Billy said they fixed their mistakes from its previous meeting with the Native Soldiers team.

“One thing we wanted to do better was play better defense,” she said. “And I thought we did a good job with that.”

In addition to Billy’s accomplishments, Anitielu collected a second NABI title as she was part of that all-freshmen Northern Elite team three years ago.

“Honestly, it feels good,” Anitielu said as she was named the tournament’s MVP. “I mean, I have goose bumps thinking about it.”

The Scottsdale Community College bound player said the entire team meshed even though she and Billy were new to the team.