For love of family, friends and sports

About a week ago, Dean Becenti visited his family’s home in Wheatfields Arizona, where he spent time with his great-grandfather, Kee White Sr. 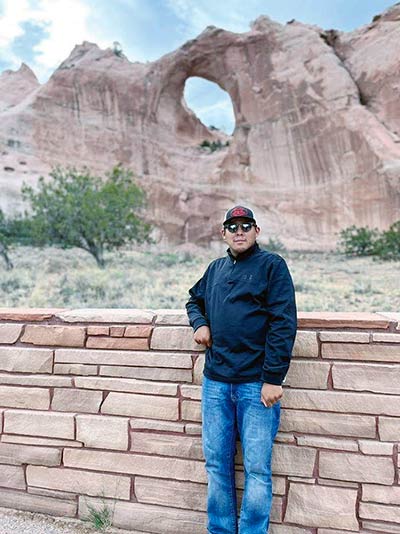 There, relatives came together and remembered their late great-grandmother, Elizabeth White, who passed away in January.

It is moments like these that remind Becenti of his work as a videographer and why he does it: because of his love for his family, his friends and their love for sports.

For nearly six years, Becenti has been traveling across the Navajo Nation, filming basketball games and rodeos and posting them online.

He also made highlight reels, videos of an individual showcasing their skills from different games with added-in music and effects.

It’s a long and tedious process, not even including how far Becenti would travel, but the 24-year-old does it all on his free time.

“I’m really humbled to be blessed with getting to know all these different people and athletes,” Becenti said. “It really means a lot that they looked up to me to make highlights for them and I’m happy I can be an inspiration to them and to help them push themselves to the next level.”

For Becenti, this project originated from his family. They had a strong bond as they helped one another and that bond was reinforced with sports.

Becenti’s mother, Natasha Becenti, was a proud Window Rock alumna who played basketball. She would cheer for the Lady Scouts years later and some of Becenti’s best memories are of them watching games.

Sadly, Becenti’s mother passed away before he finished high school, briefly numbing his passion for sports.

Around 2016, Becenti started videoing local games, more as a hobby and to give him something to do.

Soon, he found how much people appreciated the videos and decided to continue recording and posting online.

Since 2016, his small social media accounts expanded with his YouTube channel reaching over a million subscribers.

Becenti has since begun improving his recording style, upgraded from his phone to an I-Pad, and improved his editing skills.

During the COVID-19 pandemic, he spent most of his time completing highlights for high school athletes, something that coaches said helped them get more scholarship opportunities.

Since the end of the lockdowns, Becenti decided to expand his coverage. Before he specifically covered basketball and rodeo, now he plans to record volleyball, football and middle school sports.

One prestige athlete is professional bull-rider Guytin Tsosie, whom Becenti remembered following while in middle school and who is now on first-name basis.

Tsosie was this year’s champion at the Wild Thing Bull-riding Championship, an event Becenti covered earlier in July.

“Dean is a pretty good guy and what he does is good,” Tsosie said. “Making videos not just for athletes to see for themselves but other people, knowing that these local athletes are being recognized and can be shown worldwide.”

Tsosie met Becenti about six years ago when he made highlights for him. He believes these highlights are helpful for getting local athletes exposure, himself included, and they also helped him to train, to watch what he did in the past and learn how to improve or fix mistakes.

Also in attendance at Wild Thing was Kyle Tom, a locally celebrated rodeo announcer who is impressed with what Becenti does for the community.

“I’m just thinking this is pretty cool,” Tom said. “He’s keeping families connected, if there’s a kid that plays in Window Rock and he’s got like an uncle or aunt in Phoenix that can’t be at every game, now they get to watch.”

Tom met Becenti while he was videoing at a rodeo. Since then, they have become friends as they cross paths while covering large rodeo events.

He agrees with Becenti that sports are an important thing on the reservation, remembering the joy he felt watching his nieces and nephews plays sports.

The videos Becenti makes can help capture those moments, especially in 2020 after they briefly lost sports due to the pandemic.

“I’m really happy to see what he’s done in using it to not only help himself and his family but also to help so many other families across the Navajo Nation,” Tom said.

“Especially coming out of this pandemic when the numbers are going back up there’s a lot of people not wanting to go back out into public…So, he’s kind of providing an opportunity to have things captured and allows people to stay home and watch it in the comfort of their own home,” he said.

Whenever a college coach calls asking questions about one of her athletes, Whitney would send them a link to Becenti’s video of the player.

“I wish there was someone like him when I was playing basketball,” Whitney said. “To help with the exposure of players and making highlight videos for them.

Whitney played basketball on the rez and knows how tough it is to get a sport scholarship in such a remote area.

She said Becenti’s videos make it easier for families to watch their kids play and the team can also use the footage to help them learn and improve their game.

She said she appreciates Becenti and his work very much for his time, dedication and care he takes in making the videos that helps the team, athletes and community.

Becenti in turn said he owes a lot to many different people who had helped him on his journey as he plans to travel further across the rez and cover more sporting events, saying he’ll post updates on his social media accounts.

He thanks his friends like Alonzo Garnenez from Bloomfield High who helped improved his videoing and edits. And his best friend, Shaldin Yazzie, who tragically passed away suddenly in May, but who’s support and inspiration stays with Becenti.

Becenti also remembers his late grandfather, John Becenti, whose performance in the rodeo ring led to rodeo becoming one of his favorite sports.

Some days Becenti feels the weight of those he had lost in recent years and loses motivation to work on the films. But then he would also remember the fun they had and how much the videos he makes matter to the student-athletes.

He hopes his videos will honor his mother, grandfather, his late grandmother and his late friend Yazzie this coming season as he plans to travel further and cover more events.

“What I do goes back to my great-grandmother’s teaching. My great grandmother was a really generous person that would help a lot of people,” Becenti said.

“Generally, you can relate to what I do with live video videography with how I’m helping people,” he said. “How I’m giving back to people, as well as helping these kids get exposure and recruited and helping these coaches and their family.

“I just feel like that goes back to my great grandmother’s teaching about being a generous person and helping others,” he said. “What I do really can go hand in hand with her teachings.”