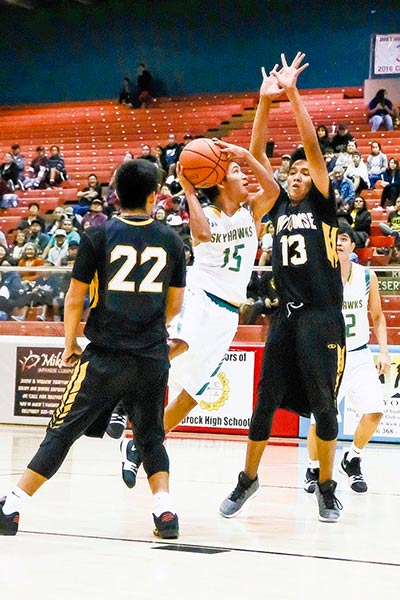 It was about four years ago when the young Newcomb High School boys’ basketball team was as timid as a youthful team could be.

Now juniors and seniors, the Skyhawks are far from the timid players they once were. They started off 2018-2019 as the tough, resilient team they’ve worked hard to become and won the annual Chieftain Tournament held at Shiprock High School over the weekend.

Newcomb head coach Dominique Richardson said, “Winning this tournament and winning the way we did … gives us confidence to play against a team known to make it deep in the playoffs (Estancia in the opening round of the Laguna tournament.”

“We looked at the bracket and we were confident seeing where we were at, and seeing the teams that were in it,” he said. “We started out with an 8-0 run.

We just have the mentality of being relentless, just continuing to play and not take plays off … We kept playing and kept on grinding it out.”

Newcomb continued to pressure and push the ball in the second game with host team Shiprock. Richardson said the teams had some back-and-forth in the first half but finished off the win with their known pressure.

“It was pretty much a game of runs in the first half,” he said. “We won by a big margin, creating turnovers.”

The championship game was perhaps Newcomb’s biggest feat to start the season.

Richardson said his team handled the team well, even with centers and guard standing well over six feet tall.

He said they continued to use their style of basketball to their advantage.

“They had a big lineup, we put on ball pressure and were able to create turnovers. That helped us out on the court and get the easy shots,” Richardson said.