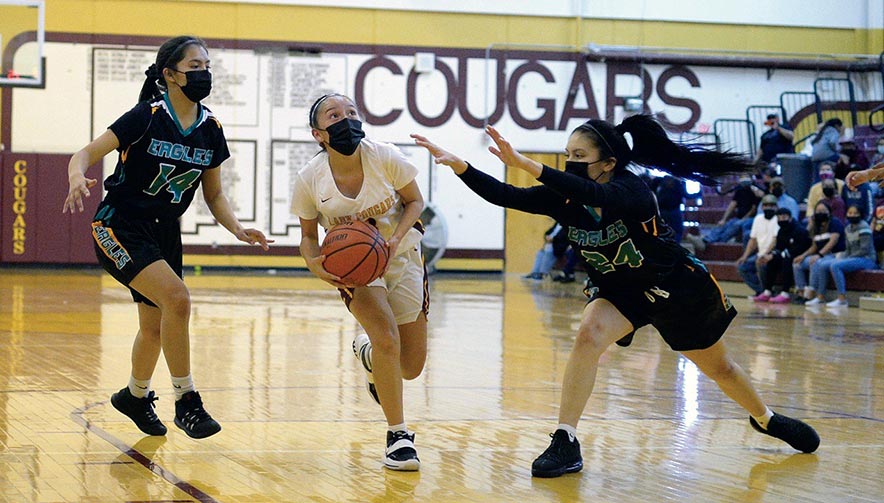 File photo
Tohatchi Lady Cougar Jada Peterson, middle, drives to the basket against the Navajo Prep Eagles in this file photo. Tohatchi earned the No. 7 seed and reached the Class 3A state semifinals.

Of all the state qualifiers, the Tohatchi girls’ basketball team was considered a long shot to make the 3A state semifinals.

Of course, that was based on the No. 7 seed they earned in the eight-team bracket.

The Cougars, however, played like state contenders, having beaten No. 2 seed West Las Vegas by a 61-50 count in the state quarterfinals.

The Tanisha Bitsoi-coached team then gave Las Vegas Robertson all they could handle in the next round. Despite giving it their all, the Cougars came up one game short of playing Navajo Prep in the state title game for the second year in a row.

“I’m very grateful and thankful that we were able to make it this far,” Bitsoi said following her team’s 41-37 setback in the state semifinals. “I played a lot of young players – eighth graders, freshmen and sophomores – and they did great tonight.

These young ladies, considering all the factors involved with this crazy year, fought real hard,” she added. “We faced a lot of different challenges and adversities throughout the season and at the end of the day we were pretty close of making that championship game.”

The Cougars finished the season at 9-5, which included a second place finish in the tough District 1-3A league.

Bitsoi said her team has grown by leaps and bounds since the start of the season on April 1.

“I can’t say enough of how proud we are of this group,” she said. “Throughout the season we made a lot of progress and the growth that I’ve seen in a month’s time has been incredible. I feel like we had players really step up and step in because we were out one starter.”

The Cougars could have used the playmaking of sophomore guard Brooke Badonie in their state semifinals but they had to make do with what they had, as Badonie was hurt in the previous game with a season-ending injury.

“The roles that these girls played, and the heart, effort and determination they had was tremendous tonight,” she said. “It’s not the outcome we wanted but that’s just part of the game, part of the competition and part of life.”

Bitsoi said their game with Robertson was back and forth with the lead changing several times.

“We were down by (seven) with just under three minutes but we hit some threes to get back into the game,” she said.

Bitsoi said they had a chance to take the lead late in the contest but they turned over the ball.

“They capitalized on that possession,” she said of the Robertson team.

And although they came up short, Bitsoi was happy that her team showed up, especially the underclassmen.

“They got some state experience and some of them had never been in those moments before,” she said. “It’s a lot of pressure to take in for a young kid at that age and I felt that they stepped up to the challenge and they executed.”

Bitsoi said they can learn a lot from a loss like this, which bodes well for next season.

“I’m looking forward to next season,” she said. “We have a young core coming back and they now know what it’s like, and what’s expected of them, so I think they’re going to be a little more hungry coming in next year.”