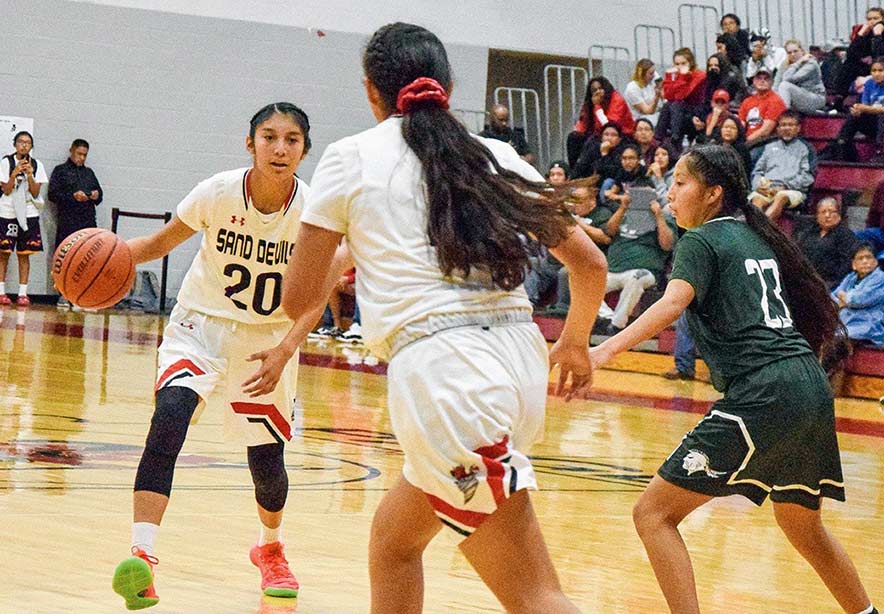 Special to the Times | Krista Allen
Page High sophomore guard Miquedah Taliman dribbles the ball across the court during the championship game during the Lake Powell Holiday Classic on Saturday afternoon at Page High.

The Page girls’ basketball team opened up the 2019 season by winning its home tournament.

Of the three games played the Lady Sand Devils were tested in the final two games as they outlasted Kirtland Central 39-36 in the semifinals before pulling away from Tuba City in last Saturday night’s championship game.

After leading 19-15 at the break in the tournament’s finale, Page posted a 42-30 win over its 3A North counterpart.

“I thought we just settled down offensively in that second half,” Page coach Ryan Whitehorse said. “We were playing good defense in the first half and we were rushing our shots and not being patient offensively.”

Whitehorse said that was the big message at halftime as the Sand Devils responded.

“We let the game come to us,” he said. “We just worked the offense and we waited for Tuba to make the mistake. That helped us out in getting that lead in the third quarter.”

For the contest, eight players scored with sophomore guard Miquedah Taliman leading the Sand Devils with a dozen points on 6-of-8 shooting. Juniors Nadya Begay and Neve Redhair added eight and seven, respectively.

“Some of the girls picked up the slack,” Whitehorse said.

Against Kirtland, the Page coach said they prepared for the Lady Broncos’ defensive pressure.