‘People didn’t expect much from me’: Diné in Wyoming signs on for 2 college sports 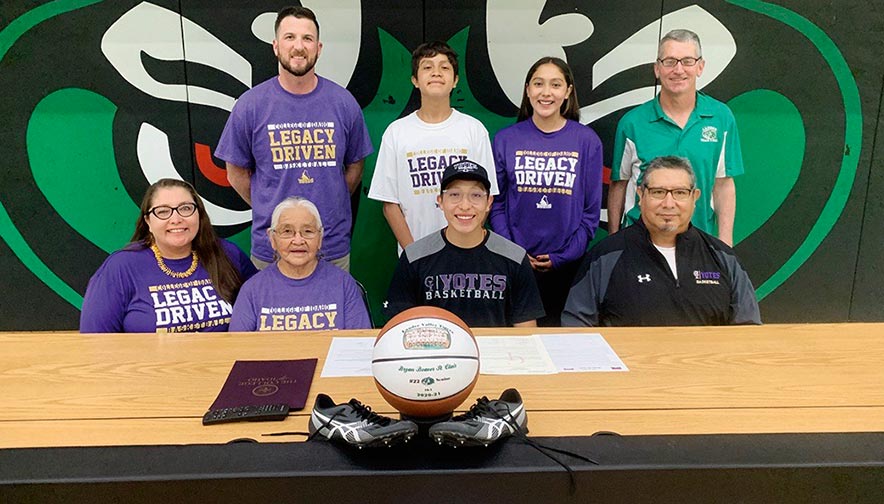 Submitted Bryan St. Clair, a Diné, Pawnee, Cherokee and Eastern Shoshone, signed to play basketball and compete on the track team for the College of Idaho. He is pictured here with his immediate family and his high school coaches.

Bryan St. Clair, known as “Beaver” to his friends and teachers, recently signed his letter of intent for the College of Idaho. What makes this unique is the fact that he is signing on to play collegiate basketball and to compete on the track and field team in the long jump event.

During his time in high school, he has received many awards and honors; he was a part of the team at the Wyoming 3A basketball championship in 2019, was All-Conference and All-State Selection for 3A Basketball in 2020. In 2021 his team was 4th at State and was All-State and All-Conference Selection for 3A Basketball. He was also the first Native 3A Player of the Year from his school, Lander Valley High. During his final season as a senior, he also scored his 1,000th point in basketball.

For track and field, his team came in fourth place at state in 2019 while he competed in the long jump event. This year at his last meet he PRed by jumping 21 feet and 1 inch.

St. Clair said that basketball is his favorite of the two, but long jump is a close second.

“I don’t know why I love it so much,” St. Clair said. “I just feel like it’s a good way to show off how athletic you are. It’s fun to jump up and fly. If you jump far, you’ll hang for a little bit, so that’s really fun.”

He is thinking about taking courses in psychology though he isn’t certain yet. What he wants to do is learn a skill that he could bring back to the reservation so that he can give something back to his community.

“I’m excited,” St. Clair said. “It’s a very academic school; that’s what everything is about — your academics — so I’m really happy I’m going somewhere where they want me to get my degree, they want me to graduate before playing sports. That’s probably why they are really successful with their sports because they’re focused on their academics first.”

During St. Clair’s senior year, the state went into lockdown because of the COVID-19 pandemic. Due to this, St. Clair couldn’t play sports. His basketball team was on the road when the state championships were cancelled and they had to turn around. Despite the disheartening reality of the pandemic, St. Clair didn’t let it get the better of him. If anything, he met the challenges with enthusiasm.

“This year I probably did my best individually,” St. Clair said. “This year for me has been insane, I can’t believe what a year I had. Even with all this COVID stuff, the obstacles, getting COVID and everything … You’d think, ‘Wow, it would be harder for you to accomplish your goals,’ but it really pushed me to do more and to do better and I accomplished almost everything I wanted to and that just makes me so happy. ”

St. Clair had a basketball post outside his home where he would practice and he continued exercising at home and built up his muscles. Even though it was uncertain if there would be sports that year, he was determined to be in shape and to come back onto the court better than ever. He would become 3A Player of the Year, All State All Conference, All Star game and then accomplish his biggest goal of going to play college basketball.

He is happy and proud of his achievements and he hopes that his story can inspire other young athletes on the reservations, be they Navajo, Pawnee, Cherokee, Eastern Shoshone, or any other tribe. He hopes to see more Natives in college.

“For all those native kids on the reservations, small ones, big ones, I was one of those kids too,” St. Clair said. “I grew up on the reservation. People didn’t expect much from me, but if you put the time in, if you really work at it and … you do good in school it will pay off.

“Don’t drink, don’t smoke, you go to school, you do sports, you work at it and like I said I think it will pay off … You can do it if you make the effort. That’s what I did and I accomplished my dream.”