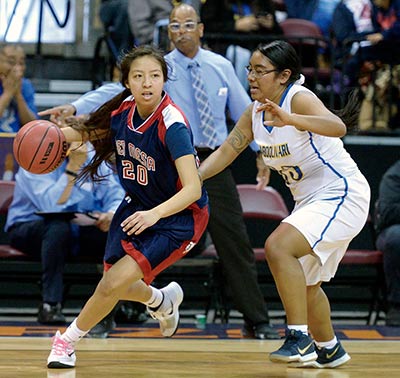 The Red Mesa girls’ basketball team had a promising start against No. 2 seed Baboquivari in last Saturday’s Arizona 1A state semifinals.

Red Mesa, the tournament’s No. 11 seed, trailed 12-10 late in the opening quarter but a three-point shot by Baboquivari junior guard Autumn Nelson at the buzzer seemed to spearhead the Lady Warriors.

Baboquivari ended Red Mesa’s state playoff run with a 58-41 win at the Finlay Toyota Center in Prescott Valley in a tournament that was marred by uncertainty due to inclement weather.

“We had a hard time adjusting to what they were doing, which was moving the ball,” Red Mesa coach Sandy Benally said. “I think we got caught misplacing the ball instead of playing our positions and taking care of our areas.”

With Baboquivari making extra passes for the best available shot, the Warriors finished the contest by making 23 field goals, which included nine treys.

“They opened up the game with their 3s,” Benally said of the Warriors. “I thought we were taking some good shots but some of them were not falling. And when we made some inside shots they (Warriors) were making 3s so that killed us. We just had a tough time controlling them.”

With the momentum, Baboquivari opened up a 30-16 cushion at the break. The margin was extended to 47-25 after three quarters before Red Mesa came up with a 16-point outburst in the fourth stanza.

Senior Aaliyah Nez put in 10 of her team-best 13 points in that final stanza while teammate Jessica Simpson added 12 with nine of those points coming in the opening half.

Like most schools, Red Mesa arrived in Prescott Valley on Wednesday but due to record snow in the area the Arizona 1A (and 2A) Final Four rounds were initially postponed on Friday morning by the Arizona Interscholastic Association.

But as the roads cleared up the teams that made it that far agreed to finish out the tournament this past weekend. All of the 1A state semifinal games were pushed back one day.

“I think it really got to everyone,” Benally said. “It was not only us but for our kids, they were really hyped up to play (last) Friday. They were ready to play but the AIA had decided to postpone the games.