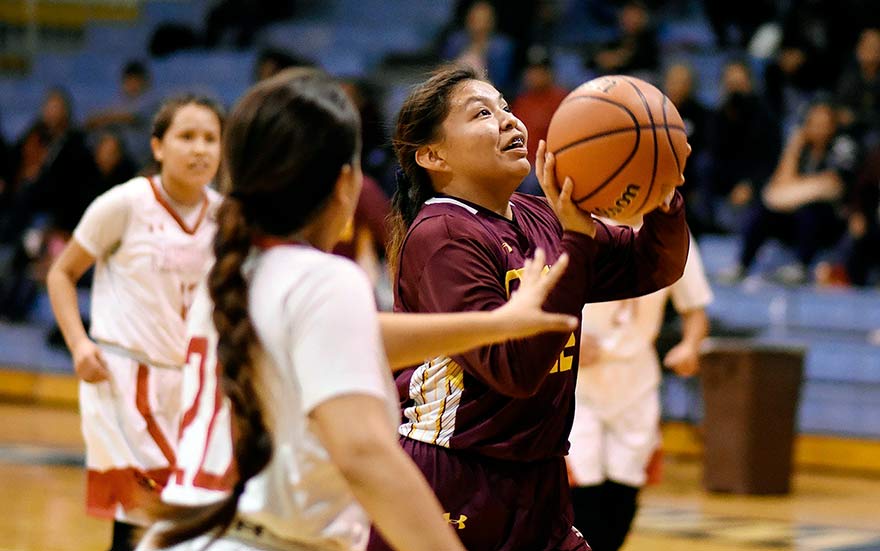 File photo
Rock Point senior Ranisha Begay (right) goes up for a two-point shot against St. Michael earlier this year. The Lady Cougars earned the top seed in the Arizona 1A bracket, opening with No. 16 seed Williams on Friday.

The top half of the Arizona 1A girls’ bracket seems to favor the top-ranked Rock Point Lady Cougars.

The Cougars open the state playoffs playing No. 16 seed Williams on Friday at 6 p.m. at Bradshaw Mountain High School.

“We played them at home,” Rock Point coach Andrew Reed said of Williams. “We pretty much know what they’re running. From what I saw they were not very good ball handlers so that’s going to be to our advantage.”

In that earlier meeting, Rock Point won 66-21. If the Cougars advance, they will take on either No. 8 Grand Canyon or No. 9 seed St. David on Saturday at 10:30 a.m. at Yavapai Community College in Prescott, Arizona.

The Cougars own a 64-55 win over Grand Canyon this season already so Reed thinks their biggest test won’t be until the state semifinals with No. 4 Fort Thomas and No. 5 Mogollon being on their side bracket.

“We’ve seen both teams play but we’ll be ready for them,” Reed said.

During the Chandler Prep tournament, Mogollon defeated Rock Point 51-50 in a freedom game, which does not count in the state rankings.

“They manned up on us,” Reed said of Mogollon. “They beat us by one point, even though we took a lot of steals on them. It was the turnovers that killed us. We missed some layups but we’ve pretty much bounced back. I feel like we’re a very solid ball club right now.”

Without getting too far ahead, Reed said they’re going to focus on their opening round opponent.

“We’re going to get ready for Williams on Friday night and we’ll see who we have on Saturday,” he said. “Based on that we’ll make the adjustments we need to make. We’ll be ready when we get down there.”