‘Everyone wants to beat us’ 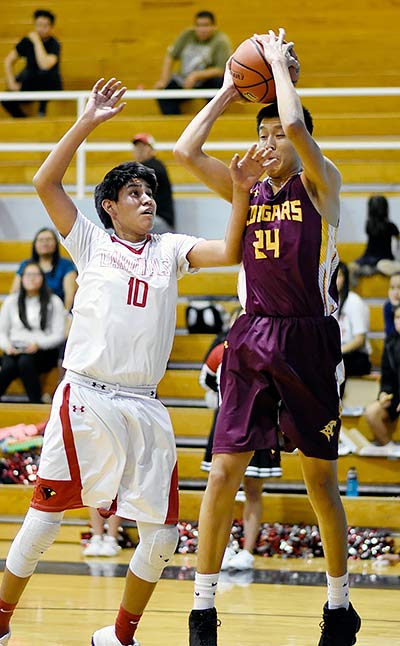 Rock Point coach Melvin Arthur said having the No. 1 seed is a historic first for the school but he’s very cautious about the consequences of having that top seed.

“It puts us in a good position to go through the tournament,” he said. “But at the same time the other teams are wanting to beat the No. 1 team.”

With that said, Arthur expressed the need for his club to control what they can on their end if they want to be successful.

“We just have to make sure we play smart basketball and play good team ball,” he said. “We have to stick with what brought us here. We need to play tough defense and take care of the ball and just trust ourselves.”

As the top seed, Arthur feels that his team needs to prove to other 15 schools they deserved their lofty status.

“Everyone wants to beat us,” he said. “We know that and I’ve told the boys that in the past I’ve seen the No. 1 team go out in the first, second and third round.

“We don’t want that to happen to us,” he said. “We just have to stay focused.”

At 24-5 overall, the Cougars have not loss since the Chandler Preparatory Holiday Classic as they went 2-2 in that competitive tournament in late December.

Rock Point opens the 1A tournament against No. 16 seed Bagdad on Friday at 7:30 p.m. at Bradshaw Mountain High in Prescott Valley, Arizona. The winner advances into the second round, awaiting the survivor of the Mogollon and Patagonia Union in a No. 8 vs. No. 9 game on Saturday at noon at Yavapai Community College in Prescott, Arizona.

And while they are not looking past Bagdad, a 9-13 team, the Rock Point coach says they’ll have their hands full in the next round.

“Mogollon and Patagonia have been winning a lot of their games since Christmas,” he said. “They have done well within their leagues. I think (whomever) we play it’s going to be a good game.”