When Tasiah Little reached high school there were some doubts on where basketball could take her. 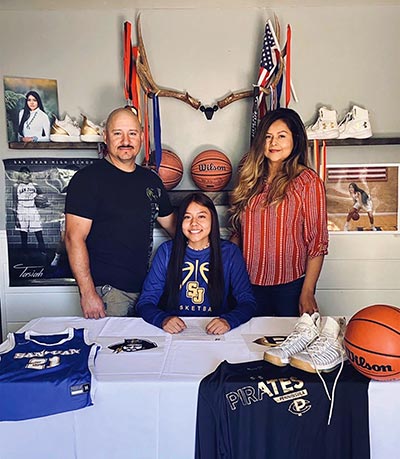 She still had those feelings her junior year at San Juan High School in Blanding, Utah. But when she reached her senior year, Little began to get noticed, with a half dozen schools wanting her services.

“It’s always been a dream to play college ball but when I got into high school I thought it would be a 50/50 chance that I would go,” the former Lady Bronco point guard said. “Going into my junior year I still wasn’t sure but now that I got this opportunity I feel like everything I did worked out.”

Little’s parents are Billy and Alsieta Mendoza and her biological dad is Andrew Little. Her grandparents are Albert Lameman Jr. and Elsie Lameman from Bluff, Utah.

Of the six offers she received, Little chose Peninsula College in Port Angeles, Washington as she is going to pursue a nursing degree.

“Financially-wise, they gave me the best offer,” she said of her choice. “All I have to do is pay for my dorm.”

Little’s mother, Alsieta, said it was a proud moment when her daughter signed her letter of intent, knowing that Little didn’t give up despite some early struggles.

“I always knew she could achieve her goals and dreams,” her mom said. “She’s worked so hard for this and I believe her discipline, respect, and the support she’s gotten helped drive her.”

Mendoza said her daughter didn’t get as much playing time as she wanted her freshman and sophomore season. Nonetheless, she continued to work at her game.

Alsieta said her husband, Bill Mendoza, took Little under his wing and helped mold her.

“Before my husband came into the picture she struggled,” Alsieta said of her daughter. “He coaches baseball so he talked to her a lot. He told her about being on the same page with her coaches.”

Those teachings, Alsieta said, enlightened her daughter as she capped her senior season by putting up some flashy numbers.

Little averaged 15.8 points, 5.4 rebounds, 4.0 assist and 3.5 steals per game this past season. She was later named First-Team, All-State for Class 3A by the Utah High School Activities Association.

“I was one of two captains so as the point guard I needed to lead our team,” Little said.

With her leadership, San Juan made an appearance at the Utah 3A state tournament as the No. 11 seed.

In the opening round San Juan upset No. 6 Emery, 57-55, before losing its next two games, finishing the season with a 12-12 overall record, which included a 3-7 mark in region play.

“We had a good group of seniors this year,” Little said. “There was seven of us and some of us played on traveling teams and we all played with the city rec.”

Little said beating Emery was the highlight of this year’s basketball season as they had lost to that same team two times during the regular season.

“It felt good to beat them,” she said. “We just played as a team and we all worked together.”

Little is hoping to carry over the success she had at San Juan High to the next level.

“I want to make an impact,” she said, noting that she’s leaving for Peninsula College in late September as the coronavirus pandemic postponed the start of the school year.

Mendoza admitted she’s having mixed feelings about her daughter leaving for college.

“When I received her letter of intent I had a lot of emotions,” Mendoza said. “I just cried because it’s hit home. She’s been by my side since she was a baby, but I’m happy for her. She’s achieved her dreams and I know basketball has helped her throughout her whole life because she’s had a missing piece in her world, which is her biological dad.

“I think basketball has helped her get through a lot of those emotions and hard times,” she added.