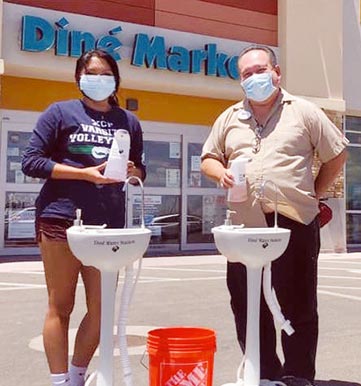 This year’s incoming high school seniors, especially fall sports athletes, are doing a lot of complaining, and rightly so … the COVID-19 pandemic has deprived them of the normal senior year they were anticipating, with friends and dances and homecoming and the chance of catching the eye of a college sports recruiter.

But many are also growing up in a hurry, buying groceries for elderly family members, taking care of little brothers and sisters while their parents are quarantined with COVID, and running family errands so more vulnerable adults can stay home.

Then there are those who go beyond the call, like Kaori Robertson. The 17-year-old volleyball standout, who is going into her senior year at Xavier College Prep High School in Phoenix, had accompanied her contractor father, Jonathan Robertson, to Dilkon, Arizona, where he was working on a project. While there, they stopped at the Dilkon Bashas’ for groceries.

The store was requiring customers to wash their hands before entering, which was good, but Kaori, who is interested in the medical field, was a little shocked at the setup.

“It seemed to me that there were some areas for cross-contamination,” she said, noting that everybody had to touch the valve on the water container and the soap dispenser. As it does when she anticipates the trajectory of a volleyball flying over the net towards her, Kaori’s mind immediately went to defensive solutions.

She thought of a touchless hand washing station she had seen at a campground. “It works with a foot pump,” she explained. “You pump a button with your foot and it forces air through a tube that pushes the water out of a five-gallon container.”

That still left the soap problem. Kaori found a soap dispenser with a battery-operated motion sensor so you don’t have to touch the soap either. Her Diné parents (she is Totsohnii, born for Kinyaa’áanii) were supportive of the idea, but Kaori didn’t know how the Bashas’ bigwigs would react to a teenager suggesting improvements to their hand-washing protocol. She needn’t have worried.

The grocery store chain’s corporate office in Phoenix referred her to the company’s public relations team, Ashley Shick and Rob Johnson. “They were really cooperative about it,” Kaori recalled. Given the green light, Kaori immediately launched a GoFundMe page. “I was really surprised that some of my cousins and relations I hadn’t seen in a while put it up on their social media and helped me promote it,” she said. “That was so nice to see that.”

With her reservation relatives pushing the cause, she raised $3,000 — enough for 20 hand-washing stations with soap dispensers. That was enough to equip all seven Bashas’ stores on Navajoland plus some trading posts and travel stations.

Her parents helped her deliver them over a three-day period, during which she got a pretty comprehensive tour of the Navajo Nation. “We put 1,451 miles on our vehicle!” she marveled. Both Navajo Nation Shopping Centers (Bashas’ landlord on the reservation) and Diné entrepreneur Rueben Mike praised Kaori on Facebook, but she got even more gratification from watching people use the hand-washing stations.

“The expression on their faces was relief,” she said. “We provided some comfort in these fearful times.” What did Kaori learn from the experience? “I always thought I would go into the medical field,” she mused. “But after this, my options have expanded. I discovered I’m good at organizing things. I’m good with numbers. My dad suggested I could be an accountant, which I never thought of.

“A lady at Bashas’ even said, ‘You could become president some day!’” For the upcoming crazy school year, she’s going to focus on volleyball if she gets a chance to play, and try to land a college scholarship so she can fulfill one or more of these dreams. “Fingers crossed!” she said. Squeaky-clean fingers at that.