‘The fastest hands’: Sky’s the limit for PV’s Lanae Billy 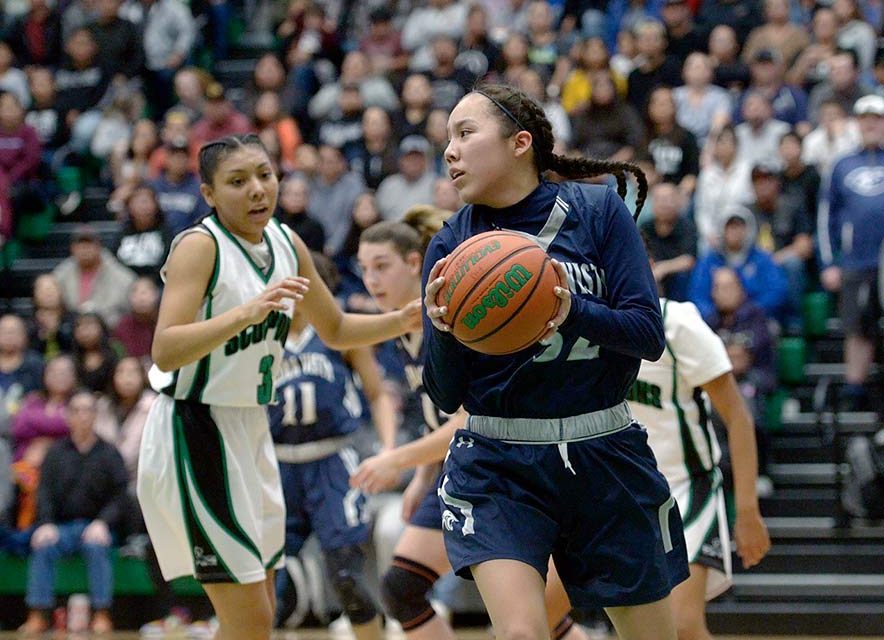 It didn’t take long for the PV coach to consider sophomore guard Lanae Billy, who reinforced her place as one of New Mexico’s best prep players, regardless of classification.

“Lanae is the ultimate team player and she’ll do whatever it takes for the team to win,” Reed said. “She’s one of our leaders on the court and to take over as captain as a sophomore is something special. The girls look up to her and when she voices her opinion it’ll be heard.”

With her high basketball IQ, Reed said Billy had the ability to seize the big moments over the course of the season as she accumulated 508 points despite some teams using a box-and-one scheme in trying to slow her down.

“She commands so much attention,” Reed said. “Lanae saw a lot of the box-and-one defense, more than anybody that I have seen in the state. A lot of teams paid a lot of attention to her so she really had to work hard at getting every last point she made this season.”

Coupled with her 500-point total last year as a freshman at PV and the 117 she earned as an eighth-grader at Shiprock High, Billy has amassed 1,125 points in her young career.

Billy hit the 1000-point milestone on Feb. 8 against Eldorado High, accumulating the 11 points she needed.

“I hit that on my last basket,” Billy said. “It definitely pushed me to do more for my team.”

Reed said scoring 500-point seasons back to back is tough to do but Billy is one of a kind.

“She’s put in a lot of effort,” he said. “She’s the first one in the gym and the last one to leave and mentally she knew she had to work hard at getting open because we don’t run a lot of set plays for her. She just has a knack to put the ball in the hole.”

Her inside game isn’t too shabby as she had a field goal percentage of 57 percent, making 114-of-200 shots.

Despite shooting a better clip inside the perimeter, Billy said she preferred to make outside shots since she was PV’s deadliest three-point shooter.

“I’m more of a shooter than a post player,” Billy said, as her 5-8 frame is outfitted to play inside the block on the defensive end.

“I think I shoot threes a lot better than I do driving to the basket,” she said.

Besides making plays for herself, the PV coach said his pupil showed her true value by getting her teammates involved.

“She’s a very unselfish player,” Reed said, “She’ll give up a shot and make an extra pass for layups. One thing we’ve been working with Lanae is playing on both sides of the ball.

“She’s become a great rebounder and a great defender,” he added. “She anticipates and she has the fastest hands that I’ve every seen. She’ll get a lot of steals and she’ll start our transition offense.”

With her productivity, Billy was on the watch list for this year’s New Mexico’s Gatorade Player of the Year, which went to Sandia High’s Viane Cumber.

“I’m not sure how that works but to do it as a sophomore is pretty special,” Reed said. “I think people from Gatorade just put out a list on who they think is the best players in the state are and she’s right up there.”

With two more years to go, Reed said the sky’s the limit for Billy as she is closing in on reaching the top 10 career-scoring list in New Mexico.

“She’s got a bright future and she’s going to have to put some work in building strength and keeping that weight on,” the PV coach said, noting that Billy lost a lot of weight from the start to the end of the season.

“She lost that weight because of her style of play,” he said. “She played a lot of minutes and she needs to try to keep her weight on so that she can have the strength to finish the season.”