With the state playoffs looming around the corner, the Navajo Pine Warriors are playing its best basketball.

The War Party has its sights set on winning the District 1-2A title as they sport a 16-5 overall record, which includes a 7-1 mark in league play. 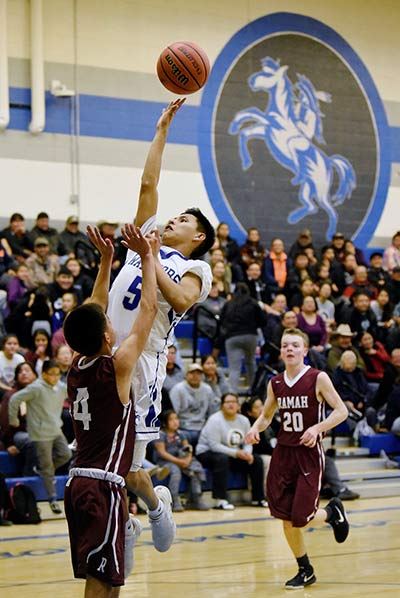 After finishing last year’s slate at 10-16, 5-7 in district, the Warriors spent the summer toiling in the gym in preparation for this year’s season.

“I worked with them during the summer and they set a goal of reaching the state tournament,” said Manuelito, while noting that since the start of the season they came ready to play.

With what they had coming back, Navajo Pine senior guard Galvin Curley felt that they could win most of their games but he’s somewhat surprised about his team leading the district.

“We never got to experience that last year, so this feels pretty awesome,” he said.

And while they are currently in the driver’s seat, the Warriors will close out the district season with four tough opponents starting with Saturday’s home game with Tsé Yi’ Gai (10-9, 1-5 in district).

“If we take care of business I see us hosting the district championship,” Manuelito said.

The second-year Navajo Pine coach said that’s easier said than done as the latter three teams have a legitimate chance of winning the district.

“It’s going to be a battle between us, Rehoboth, Newcomb and Dulce,” he said. “I hope these boys are going to be ready for that. I know they’re capable and with them setting these goals at the beginning of the season I’m going to hold them up to that.”

Of all the teams in the district, Navajo Pine has not beaten Newcomb since the two schools were placed in the same district last year due to the NMAA realignment. In their most recent meeting, the Skyhawks came away with 63-56 win on Jan. 28.

“They’ve been there before and they know the atmosphere,” Manuelito said of the Skyhawks. “They know the tangibles in what can happen in a big game. Their experience and our inexperience showed, especially in the first half.”

Navajo Pine senior Michael Marshall said his team came out flat in that game as they fell behind.

Nonetheless, Manuelito said his team fared much better in the second half as they chipped away at that early deficit.

“We came back and battled from 10 points down and closed it to seven points so I’m real proud of that effort right there,” he said.

With the realignment in place, the Warriors have also renewed its series with Rehoboth, one of its longtime adversaries.

“It was gone for awhile and last year we got it back,” Manuelito said. “I’m glad that we got to renew the rivalry again. The fans are happy that we renewed it too.”

Last season, Rehoboth won both meetings by seven and five points, respectively. In their first meeting this season, Navajo Pine came away with a 46-43 win.

“We had to steal a win and that’s what the boys did,” Manuelito said.

In addition to surprising their district counterparts, the Warriors have gained some admirers from outside of the district. Earlier last month, Navajo Pine finished second in the Bean Valley Conference Tournament.

“When we went to the Estancia tournament they were surprised with how hard these guys work hard and how they didn’t back down from teams like Bosque and Estancia,” Manuelito said. “We went toe to toe with them. We came out strong and aggressive and that’s Navajo Pine basketball.”