It’s been over a year since the Damon-Bahe Boxing team locked down and closed their gym in the wake of the coronavirus pandemic. 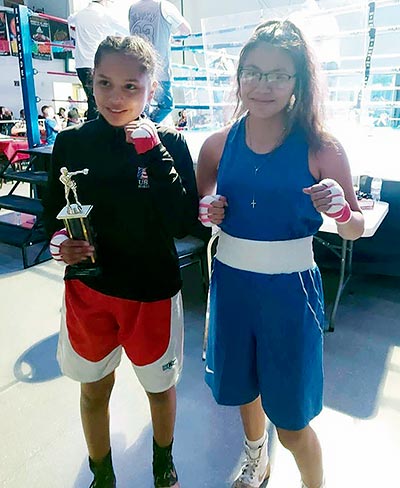 Submitted
Jayden Begay and Mariah Bahe are slowing returning to the boxing ring after their gym was shut down during the coronavirus pandemic.

Now with the introduction of vaccines and a better understanding of the virus, the team slowly returned to boxing.

In her most recent bout in Texas, Mariah Bahe won silver at the Junior Olympic National boxing tournament, losing gold by a split decision. Despite this though, Mariah has moved up in her rankings from No. 6 to No. 5 in the youth category for 17- and 18-year-olds.

“It feels great,” Mariah said when asked about ranking up. “I am going toward the number one spot, which is my main goal…. I feel like it is a better opportunity, me going up a weight and fighting new people, getting more experience.”

Johnny Bahe, Mariah’s coach and father, admitted it was a tough loss to witness as her father, but as a coach he saw it as a good match.

“Mariah’s fight was very close,” Bahe said. “She dominated the first round, the girl came back in the second round, and the third round was even. I don’t believe she lost the fight, unfortunately we got the short end of the deal, but we did go out there and compete. We got a lot of experience. She’s at that level, she’s competing against the top females in the nation, she’s holding her own. She’s not getting stop, she’s not getting beat and when she is losing its very close.”

Mariah’s next fight will be in Casper, Wyoming, this Saturday. Joining her will be Jayden Begay who’s ranked No. 3 in the intermediate division for 13- to14-year-olds.

Begay will face a former intermediate boxing champion. Also fighting in the intermediate division is newcomer Kamora Williams, who coach Johnny Bahe believes will make it to the regional tournament, then nationals where she can be ranked.

It’s been a long road to recovery for the team after nearly a year of inactivity because of the pandemic. The team tentatively returned to training last fall, taking precautionary measures and allowing only a few people into their gym.

When Mariah competed in her first fight 14 months since the start of the pandemic, Bahe described her skills as rusty.

The pandemic had robbed the team of their edge, one that they have regained, but it was no easy feat.

Because only a few states are having open competitions, the team had to make long trips, driving as far as North Dakota and Texas so that the team can fight.

The team is cautious, sanitizing whenever possible and masking up whenever team members are in crowds, doing whatever they have to in order to compete.

Often times the team has to fight people out of their league because of a lack of participants. It’s challenging but Bahe believes the experience will be crucial when they enter nationals.

Mariah received fame for being a high-ranking boxer from the Navajo Nation, winning tournaments and starring in a documentary about her journey as a boxer and her dreams of competing in the Olympics. Despite the challenges of the pandemic, she is still determined to succeed.

Jayden is becoming just as famous in her rankings; she is aging up to a new division where she’ll be fighting more skill opponents.

“Boxing is just something that I fell in love with,” Jayden said. She said it felt good being ranked No. 3 for her division.

“Jayden is standing up to nationally ranked girls,” Bahe said. “She’s not backing down; she’s not being beaten by fear anymore, she knows she can compete at that level.

“We went to North Dakota and she fought a lady who had twice as many fights as her, another weight class above against her and Jayden held her own. She lost by a split decision. It was a close fight for her, when she goes to Wyoming, she is going to do the same…that’s not going to stop her, it’ll motivate her do more.”

The two young boxers have become role models to some of the younger boxers in the gym as they continue to progress up the ranks.

Bahe’s older sons have returned home and are helping the team prepare for their coming competitions. It was family that inspired Mariah to pick up the gloves and to this day her brothers continue to push her to do her best, like they used to back when they were children.

Although this hasn’t been a normal season for them, the young boxers prepare for their coming fight this week and are confident in their abilities.

“Mariah, Jayden and Kamora are great female boxers, they represent their Navajo nation with pride,” Bahe said. “They always look to their heritage when they’re out there and they conduct themselves with pride being Native American and laying down the road for their younger sisters and brothers, showing they can get there.

“Boxing isn’t an easy sport, so for those three doing it, following each other, it’s a great inspiration for the rest of the team to see…. I’m excited to see what happens next, I’m excited for the team.”