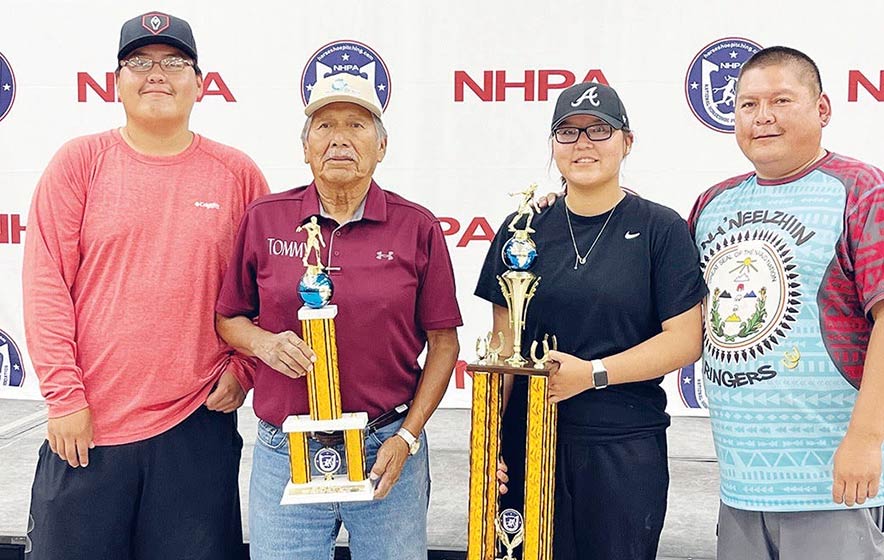 This year’s World Horseshoe Pitching Championships were held in Monroe, Louisiana, and among the winners were Kalie Trujillo, this year’s Junior Girls Champion, and her great-grandfather-by-clan, Tommy Antone, who won first in the Elders B1 Championship.

“It feels great, I like it, this is my dream to be a world champ,” Antone said.

It was a good competition where he faced almost 15 opponents a day. At one point he was in fifth place before overcoming his challengers.

It was a long drive to Monroe, but he said it was worth it as he traveled with the Trujillo family and his wife.

Antone loves horseshoe pitching but his favorite is meeting people from other states and parts of the world.

Antone has been pitching horseshoes since he was a young man and has been to the world championships a total of four times in Utah, Texas, Nevada and now Louisiana.

This is his first time winning a world championship, but he is a four-time state champion in New Mexico.

“This was my dream to make the world tournament and I did it and I like it,” he said. “I made new friends and met old friends. The trip was worth it.”

Kalie Trujillo picked up horseshoe only a few years ago but has grown fond of it. This is her second time at world’s. Last year she came in second in her division. This year she came out on top.

“It was exciting,” Trujillo said. “I think that’s cool, but it’s fun too that I get to win all these achievements.”

Trujillo has won many tournaments and was last year’s girls’ junior state champion for New Mexico.

This year she focused on her footwork and technique, which, she thinks, helped her win the competition.

It was very competitive as she faced the same girls from last year, but it was still fun. Meeting new people from different states is always fun for her.

This is her last year playing in juniors. Next year she’ll be 18-years-old and will move to the women’s competition.

Also present for the world competition were the rest of the family – father Stacey Trujillo and her brother Jacob.

Although they didn’t place in their respective categories, they said it was still a fun and exciting time.

“We were experienced so we know what to do, but it was still exciting trying to get those wins each day so you can try to come out on top,” Stacey said. “We were playing against five opponents each day. So we played like 15 games out of the three days. So, actually, I played 15 other opponents from all different states.”

Stacey ended up in a four-way tie that was broken by percentages. Despite facing the second-place winner, he was given fifth place while Jacob came in fourth in his category.
This is a family event for them and they made it into a vacation as they traveled with Antone.

Next year’s championship will be in Michigan. Antone isn’t sure yet if he’s up for the drive, but the Trujillo is already planning for it.