As a freshman, Jewels Leslie was among the top runners for the New Mexico Highlands University women’s programs. 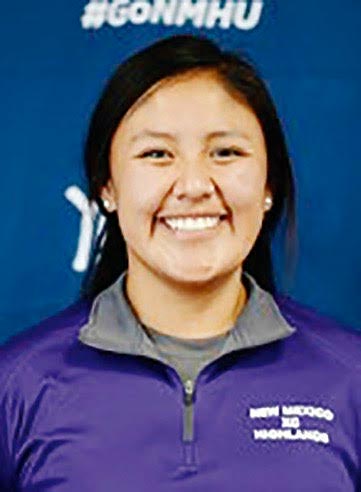 The Wingate High graduate wants to do better this season.

She said she didn’t race as a junior and senior because of the pandemic.

“I did not compete in any sports,” she said. “I kind of went into a slump.

“At the beginning of cross-country, I was dedicated to get back to where I was,” she said. “I was not where I left off.”

Leslie improved her position in the starting lineup over the course of the cross-country season. She was fourth among the Cowgirls in her college debut, a 5K.

In the next race, a 6K, she placed third on the squad and 29th among the 52 finishers.

By the Rocky Mountain Athletic Conference and season-ending Division II South Region championships — both 6K races — she was the team’s third finisher.

She ran a career-best time of 24 minutes, 5.1 seconds in the regional, shaving more than a minute off her time from a September race.

She didn’t have a particular race strategy, other than to take “one race at a time,” she said.

“I try not to think so far ahead,” she said. “I do kind of psych myself out.”

But she did start fast in races.

“I tried to find a place I was comfortable,” she said. “I’m much more of a racer from the gun.”
She didn’t have to change much of her running form. Bob DeVries, head cross-country and track coach, suggested she tuck her elbows more.

“He knows I could do better,” she said. “It was more so how I was feeling about a race or practice.”

During the indoor and outdoor track seasons, Leslie competed mostly in the 5,000-meter run. She won the race at an April meet, placing ahead of Navajo Prep product Brandy Ray and Window Rock graduate Taylor Murphy, both of Fort Lewis College. And she was second in the 5,000 at a March meet.

“I do love the 5K,” she said. “My body is more suited for endurance. I do not have much speed as a runner.”

Leslie has been training six to seven days a week this summer, running a minimum of six miles daily when she trains.

“I did really try to stick to training this summer,” she said the afternoon she returned from a short vacation with family.