The Gallup-McKinley County School District is moving forward to begin practice for fall sports on Feb. 22.

Nearby Rehoboth Christian School is going to wait until March before beginning the fall sports season.

These plans were announced following the New Mexico Activities Association’s special meeting on Monday as the board of directors approved a sports calendar for the 2020-21 academic year.

“I’m very excited,” said Ben Chavez, the athletic director for GMCS. “I’m excited for the kids because the idea of them being isolated and trapped indoors for the past 11 months is not good for them.

“I know that their social and emotional well-being has been affected and I think we’re taking a step in the right direction to get these kids back into some sort of activity,” he added. “They’ll be able to interact with their friends and get some normalcy back into their lives.” 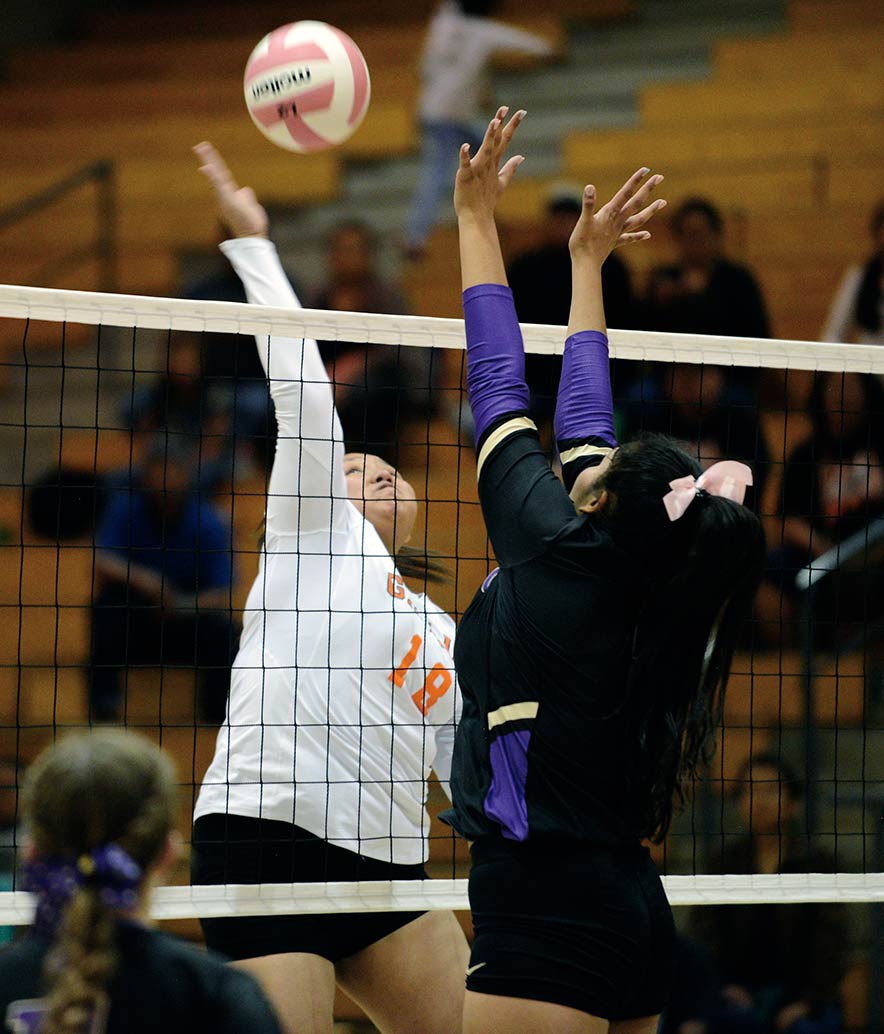 File photo
Gallup middle hitter Hailey Long (18) hits the ball over Kirtland Central’s Arianna Lee (4) in this file photo in 2019. The return of New Mexico prep sports is slated to start on Feb. 22.

“The kids have been waiting for this opportunity to play sports again for a really, really long time,” Pete said. “They’ve been very patient and I’m happy that they’re going to go out there and enjoy the sports they love to play.”

The return of prep sports was given the go-ahead last week by New Mexico Gov. Michelle Lujan Grisham and the Public Education Department.

In that announcement, all schools were notified by PED that they could begin hybrid in-person learning as soon as Feb. 8, which is a requirement to even play sports.

The PED and the New Mexico Department of Health will conduct a two-week monitoring period for schools that begin hybrid learning. They will keep tabs on the spread of COVID-19 while the students are in class and if there is no significant increase of the virus, the school may begin sports.

According to Chavez, GMCS plans on having its students back in class next Tuesday for all students K-12.

“We’re opening the doors on Feb. 9 for the students who do want to come back,” he said, while noting that since last week the school district has been reaching out to parents asking whether they’re going to send their kids back for in-person learning.

Nonetheless, Chavez said GMCS has done some hybrid learning during this pandemic, particularily at the elementary level.

“We’ve been planning and preparing on getting all our students back into the classroom,” he said. “We were just waiting for the governor’s orders to allow that.”

Pete said Rehoboth has also implemented hybrid learning since last October but when COVID-19 cases started to rise in November they went strictly to online learning.

The small private school, Pete said, is continuing to go online but they’re looking at returning to hybrid later this month.

“There are some things we need to figure out first,” he said.

With that, Pete said the start of fall sports should begin sometime in March.

And while the approval of fall sports are set to begin on Feb. 22, Chavez said each sports program has been limited to mostly individual workouts.

“The governor is allowing offseason workouts,” he said. “It’s still limited to working in a 5-to-1 pods with the kids socially distancing.”

Chavez said there are a lot of things to consider in the coming weeks, as each school district will assess the pros and cons of starting in-class learning.

“There are some schools that have not committed to go full hybrid for whatever reason,” he said. “That’ll probably impact our scheduling process but I’m just excited to get the kids back out there again.”