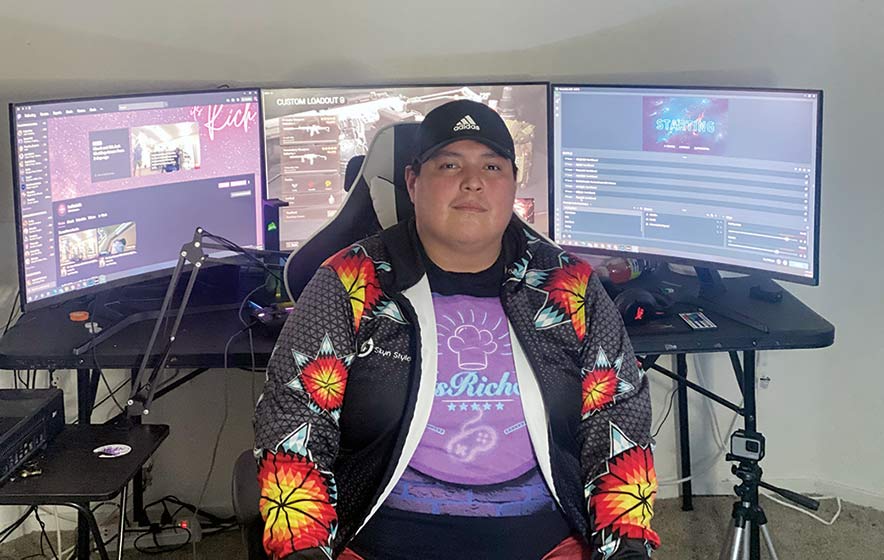 Courtesy photo | Latrell Anderson
Diné streamer Richard Sepulveda presents his three-screen computer setup. One monitor displays the interaction on his chat, another for his game and one displays the software running his stream.

Richard Sepulveda begins his workday at 5 p.m. on a swing-shift as a kitchen manager and chef at one of the most iconic casino resorts on the Las Vegas strip.

The 24-year-old Diné is employed at the MGM’s luxury entertainment venue called TopGolf. But after Sepulveda clocks out at 12 a.m., he begins his second job, which he enjoys so much more – playing video games.

In the dwindling hours past midnight and far from the glamour and bright lights of the strip, Sepulveda returns to his apartment, fires up his computer, turns on his lighting rig, and becomes “ItsRich88” on the streaming platform known as Twitch.

Sepulveda is a streamer and he broadcasts himself live to anyone throughout the world. The social media site centered around the streaming of video games has grown exponentially in recent years. Sepulveda’s presence on the site comes in the form of a channel where you can view his stream and interact with other viewers in the form of a chat room. After a relatively slow start in early 2020, he began drawing public interest and followers to his channel. Sepulveda now has a community and is working on turning the playing of video games into a profitable business and a possible career.

Sepulveda grew up in Mesa, Arizona, but spent much of his upbringing in the Window Rock area. “Back home, I have a lot of family from Fort Defiance and Window Rock,” he said. “That’s where my mom and dad grew up.”

Sepulveda is proud that his stream is a place of positivity and good vibes. “I want to have an open, fun stream,” he said. “I always have music in the background. I have things where people can request songs if they don’t like my type of music. “I can get serious when playing super competitive games, but nine times out of 10, I’ll just play the game,” he said. “I feel like I’m a very relatable person. Some people will come in and talk to me about their day. I talk about my day. “I keep it like a party atmosphere,” he said. “’Let’s get hype, we’re chilling.’

At the end of the day, I’m about spreading positivity.” Sepulveda is an affiliate of Twitch, a program that allows qualified streamers to monetize their channel and build an audience in the goal of becoming a Twitch Partner.

Two ways to support Sepulveda’s stream are through a follow or a subscription. “If you come into my channel and you click the ‘follow’ button, you get access to channel points, which not only improves the stream but improves your experience in the stream,” Sepulveda explained. “I have different channel points for people that just follow and watch.” Channel points are collected through watch time and interaction and can be redeemed for rewards like a highlighted message broadcast on the stream or the chance to play alongside a streamer.

“There are tier-one subscriptions, that is where you directly support the person you are watching,” he said. “For those people who subscribe to me, at $4.99 a month, you get exclusive emotes. “I have five different emotes that are all unique,” he said. “It just gives you a little more flex in the streams. It gives a little more direct support for the person you are watching.” Twitch takes a cut of the $4.99 subscription fee, at around 33% to 50%, with a payout on the 15th of every month, according to Sepulveda.

Juggling life as a full-time worker in the restaurant industry of Las Vegas and pursuing life as a full-time streamer is not overly time-consuming to Sepulveda. “I don’t think it’s very taxing to me, because I love playing video games,” he said. “I kind of just now have a camera on me and everybody can see it. Going from one job to essentially another job, I start to look forward to my streams and interacting with my followers.”

“I look at it like I had a long day at work,” he said. “I just want to go home and unwind and relax, and that’s how I unwind and relax from a busy hectic day of a real-world job.”