In his first college cross-country season, Tayan Benson is heading to the men’s national championship. 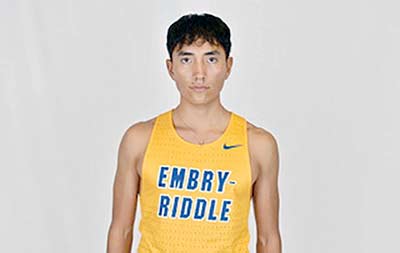 The Miyamura High School alumnus said he is among eight Embry-Riddle Aeronautical University men who will travel to the NCAA Division II national championship Dec. 2 in University Place, Washington.

The freshman said seven Eagles would compete in the race, and he is the seventh.

Benson placed seventh among the Eagle finishers in Saturday’s South Region championship 10K, his first time completing that distance. He was 50th in the field of 124, as Embry-Riddle finished third among 18 teams and qualified for the national championship.

“I felt prepared. We’ve been working up to this,” he said. “I was confident that I was ready to race.”

Over the summer, he trained to become accustomed to the season’s higher mileage total. He ran six times a week with a long run of 8 to 11 miles. He went from 40 miles a week to the 50 to 60 he’s been doing this season.

“I’m not a long-distance guy,” said Benson, who was recruited for track and field. “I didn’t come from a background of doing a lot of mileage. I decided to be very safe and gradual. I just built up to where I am now.”

Early in the season, he started races conservatively and passed runners along the way. As the season progressed, he positioned himself near the front pack and stayed with the leaders as long as he could.

His strategy at the regional was to “go out comfortable and try to stay comfortable. Try to position myself in a race where I know where I’m supposed to be. We know who we have to be around,” he said. “The last half of the race is just giving what’s left and trying to speed up and finish strong.”

“It was a pretty rough course, pretty hilly, and the terrain was kind of rough at parts,” Benson said. “There were a lot of switchbacks and U-turns.”

Because of the turns, he said, he had to slow to take them tight, thus reducing momentum.

He said he passed about five runners near the end and finished in 33 minutes, 2.2 seconds.

“I always have an extra gear. I go at the end,” he said. “I had a lot left in the tank. By the end of it, I realized I had some left. I’m satisfied with the time.”

Before the regional, Benson was the sixth Eagle finisher in the November conference 8K and two other 8Ks. He was fifth among the Eagles in one 8K and eighth among them in another.

He will have a short break before he begins training for the indoor track season. He said he expects to compete in longer distances, such as the 3K and 5K, before settling in to the 800-meter and mile, his specialties. The 1,500 would be his main event during the outdoor season.