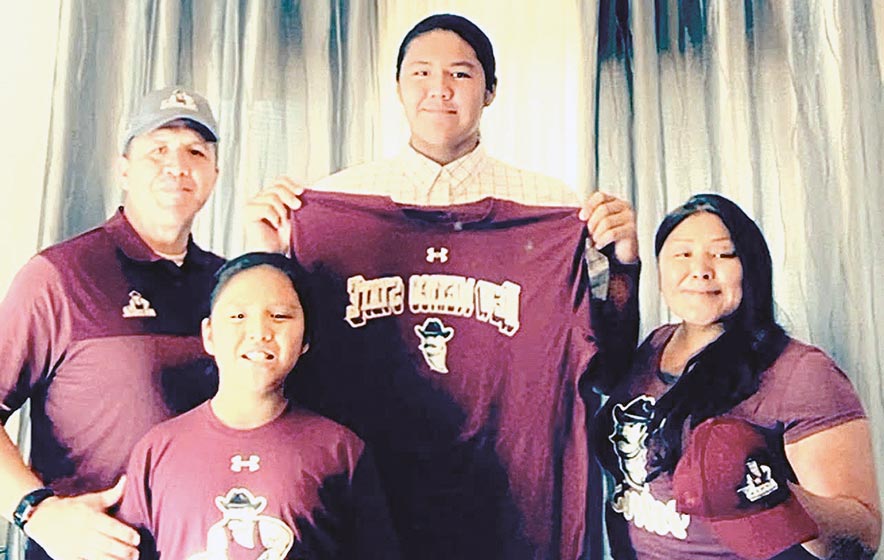 Shiyazh Pete plans to sign his letter of intent today to play football for New Mexico State University, a Division I school. An athlete from Shiprock High, Pete plans to study computer science and programming.

Pete was born in Ronan, Montana, to Natani and Geraldine Pete. Natani was serving in the military at the time, and his wife was in college. The family was constantly moving around, but the parents saw their son’s athletic potential even at a young age.

Shiyazh would play a variety of sports. At one point, he started learning martial arts and learned judo. He still carries lessons he had learned there to this day.

“He had fun just getting physical with it, so he always leaned towards the physicality sport,” Natani said.

The 7th grade is when Shiyazh first tried football and loved it.

“It’s a brutal sport where two sides come together, nothing against one another except to win the game and play by the rules. I think it’s fascinating how it becomes its own world when you stepped out there,” Shiyazh said. “It has shaped my outlook on the world. I have football to thank because it made me become more of a good person. I feel like I can talk honestly with people a lot more than I used to, and it’s a good way to know people, and the brotherhood that you expand and create in football is very worthwhile and something that I cherish.”

Shiyazh would wrestle, run track and cross country and play basketball, but it was football he became focused on.

Around his freshman year, Shiyazh’s family moved back to the reservation. He attended Red Valley-Cove High School for a while, which didn’t have a football program. However, the teachers noticed both his athletic skills and intellect and told his parents he should transfer.

“The teachers there noticed his potential, and they all said, ‘You got to get him to a bigger school,’ and that’s why we transferred him to Shiprock,” Natani said. “A bigger school that could handle his size and potential. We felt very fortunate to see him get out there on the football field.”

When he transferred to Shiprock High, Shiyazh joined the football team and excelled in athletics and academics. He won two leadership awards from the football program and currently has a 3.8 GPA. All the while, he is taking college-level courses.

“I’ve always encouraged him with what my grandmother told me, ‘T’aa whi’aji’t’eeh go,’ be self-driven because you have to be there for yourself all the way to the end,” Geraldine said.

Head Shiprock coach Anthony Clah only knew Shiyazh for three years, but he was impressed by Shiyazh’s skills and attitude.

“Shiyazh is six-foot-seven, 290 pounds; he is a very big man, but that’s not, to me, the most impressive thing about him,” Clah said. “To me what’s most impressive about Shiyazh is his quality of character; he is very honest and forthright, he’s always looking to help and be nice to others, and he is a great example in his demeanor … He has great sportsmanship, on some of the highlight videos you will see him after pancaking someone, then he will help him up.”

Shiyazh has been described as a kind and respectful individual both on and off the field. He is also interested in his culture and has taken lessons about Navajo tradition. He even danced at powwows for a time.

“I’d say it [tradition] plays a large part in my life. It’s a part of my core beliefs as a person and something I’ll carry on with me for the rest of my life,” Shiyazh said.

Shiyazh’s only regret is that his senior year was cut short by the COVID-19 pandemic. For most of the year, he wasn’t able to go to school, socialize with friends or play football. The transition to online classes wasn’t difficult for him, but he did miss playing sports.

In March, the Shiprock Chieftains were given one last chance to play. It wasn’t the grand season the seniors would have wanted, but Shiyazh was grateful for the chance.

“I felt very fortunate to have played,” Shiyazh said. “At one point, we only had 11 people on the team, which was the minimum amount for a football team, so just being able to play in that season was very great. A majority of that team was seniors, so it was kind of like a last-ditch effort to play football. There were no negatives or anything. I felt we played very decently.”

Shiyazh was worried he would miss his chance of being recognized by college scouts because of the short season. However, he persevered and kept reaching out to schools, sending highlight reels, and staying in shape at home by lifting weights and going for runs. He received some responses back and ultimately went with New Mexico State.

“I got a lot of offers from Division II and III schools, but this was one of the few schools that offered for me to be on the team, and since the season was cut short and stuff put on hold, I didn’t have the opportunity to reach other schools, so I felt New Mexico University was the best option for me given the current situation,” Shiyazh said.

Now Shiyazh prepares for his next step in his journey to attend New Mexico State University this coming year.

Coach Anthony Clah says that he and the rest of the coaching staff are proud of Shiyazh and his achievements and hopes that his success will inspire other athletes to follow in his footsteps.

“I coached college athletes for the last 15 years as a part of my profession, so I know what is required at the collegiate level to be successful. I believe Shiyazh posses the physical trait to be successful,” Clah said, “to eventually contribute and maybe even start one day at New Mexico State University, so I encourage him to continue to work hard and develop and not give up if things get tough, because things will get tough at the college level.”

Regardless though, his parents are proud of his achievements and look forward to what will come next for him.

“Both me and his mom couldn’t be prouder of him,” Natani said. “It’s a great opportunity for him, and we’re just excited for him. Like his mom said, just him putting on the uniform and standing on the sidelines would be enough for us, so this is just beyond our expectations.”

“It’s unbelievable to me because I’ve never heard of anyone going straight to Division I,” said Geraldine. “It’s like ‘Oh my god, you could totally be in the NFL, you’re heading to great things,’ is what I’m telling him. It really amazed me, and I was really surprised. I am very happy for him, and I will support him in whatever way that I can.”

Shiyazh hopes to sharpen his football skills, but he will be sure to also keep up his grades while he’s at it.

“It feels great and reassuring (to go to college),” Shiyazh said. “I feel like I’m taking a step up, climbing the ladder.”