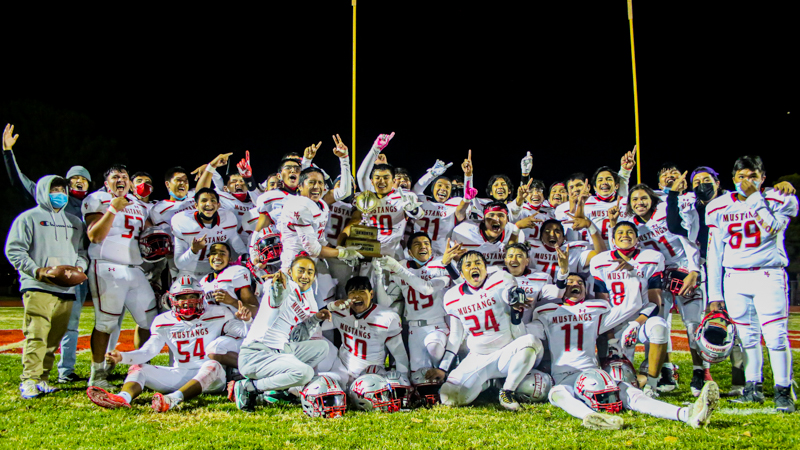 Navajo Times | Cyrus Norcross
The Monument Valley Mustangs captured the 3A North Region title on Friday with a 43-0 win over the Page Sand Devils on Friday night.

A second-quarter surge gave the Monument Valley Mustangs the momentum they needed to capture the 3A North football title on Friday against archrival Page.

The Mustangs had three drives dry up, including a 1-yard goal-line stand by Page, in the opening quarter.

But things took a different turn as MV went up three scores at the half, which led to a 43-0 win over Page during the Sand Devils’ homecoming night.

“Winning 43-0 to a good Page team is pretty dang good after they were beating everyone in the 3A North,” longtime Monument Valley coach Bryan Begay said. “It was their homecoming night, and these guys talked all week about making a statement, and that’s what it was – a statement game.”

On the ground, he added a five-yard rushing TD to complete a 47-yard drive that took five plays.

After being denied at the 1-yard line, Sheppard said their mindset was to keep pushing for that 3A North title.

“We just wanted to get the ball back and get another stop,” he said. “We basically stopped their offense, and we had that mindset that we were ready for them on offense.”

The Mustangs improved to 8-2 overall, winning the 3A North with a perfect 5-0 record.

By winning the conference, MV earned a state playoff bid, and on Saturday morning, the Arizona Interscholastic Association released the 3A bracket, with the Mustangs earning the No. 2 seed.

The Begay-coached team will play No. 2 seed Snowflake at 7 p.m. on Friday.