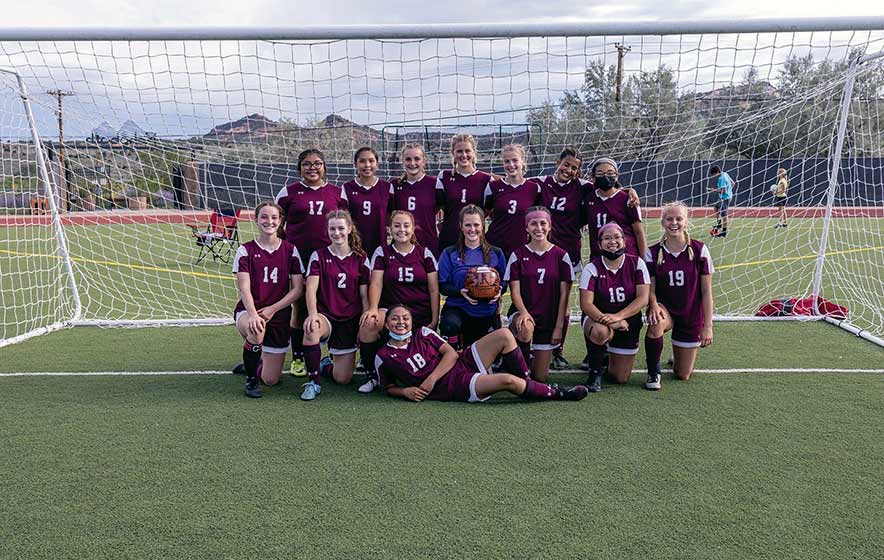 File photo
The Rehoboth Christian girls’ soccer team earned the No. 7 seed for the New Mexico Class 1A-3A state tournament. The Lady Lynx will play at No. 2 seed Socorro on Saturday with the game scheduled for 5 p.m.

He took over the program at the start of the 2020 season, which was delayed into this past spring because of the coronavirus.

“We had that abbreviated season last year and that was my first season with the girls,” he said. “I kind of knew what I was getting into this season. I knew that we had a lot work to do but I knew that there was a lot of potential with that crew.”

With a mixture of young and older players the Lady Lynx compiled a winning record of 9-7-2 this year.

“I’m just incredibly proud of the work that the girls have done this season,” Frederiksen said. “I was looking back and this is the girls’ first winning season in over ten years.”

With that, Rehoboth got an invite to the New Mexico Class 1A-3A state soccer playoffs.

“We’re very excited,” the second-year coach said. “It’s significant that we got in. They’ve been working really hard to get to this point.

“We’ve had a lot of success already this season and having the chance to go to state and play in the tournament is icing on the cake.”

The seventh-seeded Lynx will travel to No. 2 seed Socorro for its quarterfinal game on Saturday. The game is scheduled for a 5 p.m.

“I think we can expect a battle, that’s for sure,” Frederiksen said.

“They’re a fast team and they’re very experienced,” the Rehoboth coach said of the 17-3 Lady Warriors. “They bring a lot of experience. They’ve been far into the tournament a number of times in the last couple of years.”

In 20 games this season, Socorro has scored 101 goals headed by the 1-2 punch of Lola Apodaca and Elise Madril. The two seniors have combined for nearly half of those goals with Apodaca scoring 33 and Madril chipping in 25.

The Lynx will try to counteract that with its defense.

“We have a really strong defensive core,” Frederiksen said. “Our strength is our defense and this may sound trite but it’s been teamwork that has carried us through and through.

“They all have the right attitudes and everyone’s on the same page,” he said.

By playing in perhaps the state’s toughest league, Frederiksen said his girls are battle-tested. Four teams in that District 1-1A-3A made the playoffs with Sandia Prep earning the top seed.

“It was a tough district that we play in with the schools from Albuquerque,” he said. “I’m just really proud of the girls and the work that they’ve done. And I appreciative the coaching help I’ve gotten as well.”