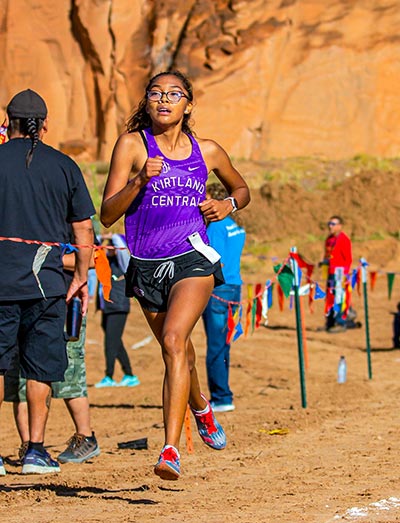 Aisha Ramone needed to challenge herself.

The Kirtland Central harrier led from start to finish at the Gallup Curtis Williams Invitational on Saturday.

Before the race, Ramone got some advice from KC coach Lenny Esson and he offered these words: In order to find how hard you can go, you have to start with yourself.

Ramone took those words to heart as she found the pace that she was looking for en route to her dominating win.

The KC senior finished the 5K race in 19 minutes, 53.99 seconds with second-place finisher Whitney James of Ganado clocking in at 21:37.37.

“I thought about what my coach said, so I wanted to test myself on how hard I can go,” Ramone said in a telephone interview. “I used that to find a pace that I was comfortable with.”

In the team standings, Navajo Prep and Miyamura both tallied 97 points with Navajo Prep taking the title based on its sixth runner.

Miyamura, meanwhile, got a fourth-place and an eighth-place effort from Lorianna Piestewa and TaSheena Thompson.

Saturday’s triumph was Ramone’s third win this season, having also won the David Charles Invitational at Rehoboth Christian and the Miyamura Invite.

With it being her senior year, Ramone would like to accomplish some individual and team goals.

“I want to help my team go to state and at least be a state champion,” she said. “I want to break an 18-minute race, and run under 18 minutes.”

Since the start of the season, Ramone has run in five races and she’s seen every district opponent except Aztec. She will see them on Saturday at the Bloomfield meet as the Tigers return all but two runners from last season’s district runner-up team.

“We’ll see how things go there but I feel like I’m running with a lot of confidence,” she said.