Newcomb improves to 4-0 with win over Zuni

The ball continues to roll for the Newcomb Skyhawks. 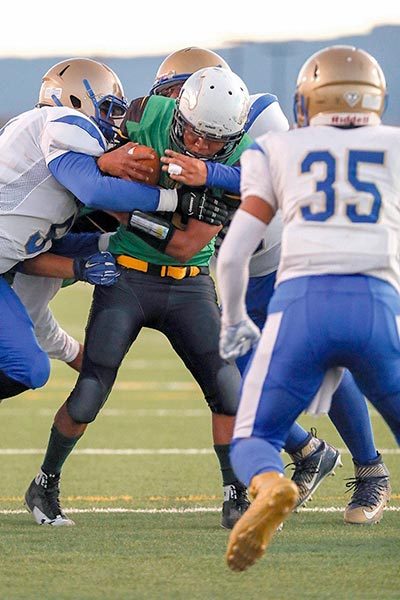 Special to the Times | Curtis Ray Benally
Newcomb Skyhawk running back Deondre Begay (green jersey) is stopped short of the goal line by the Zuni Thunderbird defense for an extra point effort on Friday at the Skyhawk Stadium.

Newcomb defeated Zuni 54-34 at home last week in front of a large crowd, to earn their fourth straight victory, which puts them undefeated at 4-0 so far this season.

Newcomb head coach Eric Stovall said the team faced a good competition with Zuni but the Skyhawks special team was hard to beat.

“They were a handful in the first quarter,” Stovall said. “It was a good test for us mentally and physically.”

Newcomb got on the board first and scored two touchdowns to lead 12-0 after one quarter. They continued to expand on their offense in the second quarter to lead 14-6, allowing Zuni one touchdown.

But the second half was where Stovall said his team really came out relentless.

In the third quarter, Newcomb outscored Zuni 22-6, their highest collection of points in a quarter throughout the game.

“We came out really strong the second half, we really focused on the run game and did our best to play some football on offense. I was really impressed with the special teams.”

Newcomb allowed Zuni 14 points in the final quarter while scoring 14 of their own to finish the game with the 54-34 victory.

Stovall said twin brothers, both wide receivers, had a good game as well as the special team.

He said they combined their efforts for a strong third quarter.

“It was big. We tallied it 420 rushing yards in the game, 100 in the first quarter, and most of it came in the third quarter,” he said. “Deondre Begay and Deontay Begay did a good job and the defense held their own.”

Stovall said the team has had a strong start to the season but part of the task is to remind the players that there is still a lot of football left to play.

He said as they move forward and meet the likes of Lordsburg, whom they will play Saturday in Lordsburg at 1 p.m., they must remain humble.

“I think the biggest thing I tell them is one week at a time, one quarter at a time, to not look past a team,” Stovall said. “I just remind the kinds to stay focused and remind them this is all preseason before district. We still got a long way to go, but I’m proud of or team, our community, parents, kids, and elders.”