Navajo Prep comes away with second, some good lessons 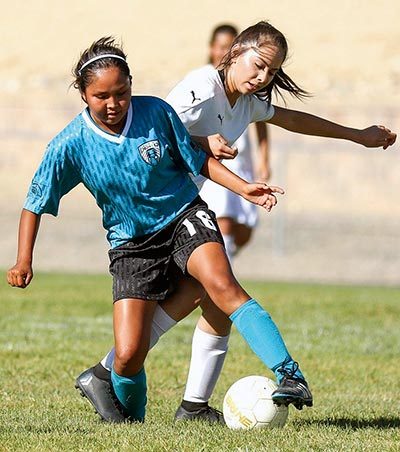 Special to the Times | Curtis Ray Benally
Navajo Prep Lady Eagle Shaynia Jackson keeps the ball away from Hatch Valley Lady Bear defender Maria Siordia in the first quarter of the “She Believes Cup” soccer tournament at the Eagles Stadium on Saturday.

There is nothing like some good competition to strengthen one’s skill set.

That was a lesson learned by the Navajo Preparatory School girls’ soccer team, who fell short to Hatch Valley High School 1-0 in the championship match of the “She Believes Cup” Soccer Tournament held at Navajo Prep on Sept. 14-15.

Navajo Prep head coach Stacy Irwin said it was a good weekend of soccer and his team worked on a few things as they prepare for the postseason.

“It went good, everybody enjoyed it, everybody had fun,” he said. “We won group A and we went up against Hatch Valley … It was a good battle; it was a good, exciting game.”

Irwin said it wasn’t as easy as a win as his team believed, which taught them a valuable lesson.

“We kind of had to battle with that one a little bit and the girls realized they couldn’t relax just because it was the JV team,” he said.

In the match with Wingate, which is still new to the New Mexico soccer scene, Navajo Prep defeated the Lady Bears 10-0.

Irwin said his team used the opportunity after the match to share words of encouragement with the new team on the block.

“We went 10-0 on them. I felt yucky after that, but they’re still establishing themselves,” he said. “After the game I told them the girls there (Wingate) are starting a program. We were starting a program, we were in their shoes at one time, so they went over and talked to them.”