‘Not to be messed with’: Shiprock tackle plays in Cowboys’ stadium 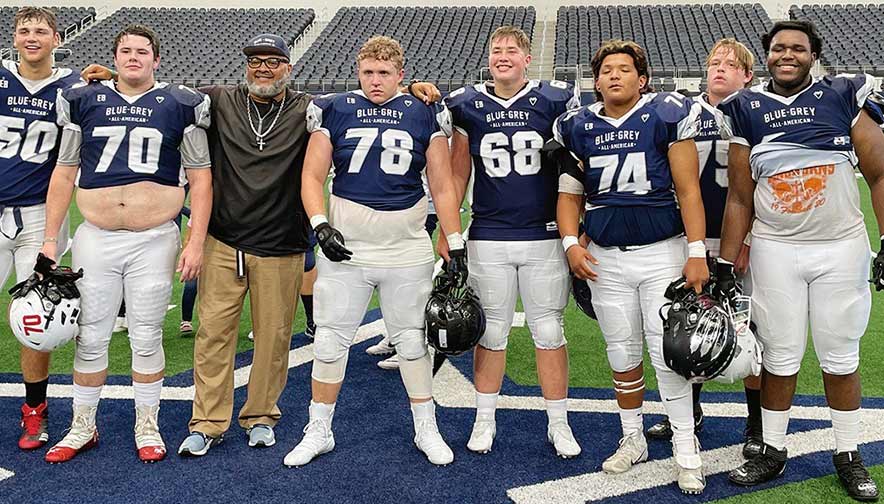 Submitted
Shiprock graduate Jason Ayze (74) poses for a picture with his teammates while playing in the Blue-Grey All-American Bowl at the AT&T Stadium (Cowboy stadium) in Arlington, Texas. Ayze received two Erik Bell Memorial Awards, naming him as MVP for both offensive and defensive player, at the conclusion of this year’s event.

Jayson Ayze made his family proud last week when he graduated from Shiprock High, but another milestone he passed this year was having the opportunity to play at AT&T Stadium, home of the Dallas Cowboys.

Ayze, who played football for Shiprock as a defensive tackler, was selected as one of the few high school football players from across the country to train and compete at the Blue-Grey All American Bowl. It is an event where former NFL players coach and train high schoolers for two days before ending the third with a football game. To cap it off, they would be doing this in an NFL stadium, all the while being monitored by college scouts.

Ayze always loved playing football ever since he was young. The sport has taught him a lot through the years.

“It’s about the memories you can make and the friendships you can build,” Ayze said. “Just how far the sport can take you if you are really dedicated to it. For me it is my go-to sport. Whenever I feel down or anything, it is the sport I turn to … Football has taught me that no matter how hard it is or how hard it can get, just keep pushing.”

His sister, Shaytoya Ayze, believes football has had a positive impact on her brother.

“I believe if he did not have any sports or football, he wouldn’t be the person he is today,” Shaytoya said. “It really helped him grow up as a person and understand responsibility, hard work and dedication.”

Ayze may look like he means business, which he does when on the field, but when he is on the sideline, both Shiprock head coach Anthony Clah and Shaytoya say he is a different person.

“He looks really intimidating but he is a big goofball,” Shaytoya said. “He can joke around with people; he is always smiling, he is always laughing, but when he needs to be serious and get things done he will do it.”

Ayze said for the first two years the football team wasn’t fun, but then they got a new coach and a new program that made things better in Ayze’s opinion. That is when he met Clah whom Ayze credits with teaching him a few life lessons through the sport.

“He’s extremely talented,” Clah said. “He’s quick to the ball. His best position is defensive tackle. He made a lot of tackles in the backfields, stopped a lot of runs up the middle. He’s extremely aware and naturally talented in that regard so he’s been a great asset to the team.”

Ayze was selected from the southwest region of the U.S and is the first football player from Shiprock High to compete in the Blue-Grey Bowl. He and his sister drove to Dallas where Ayze trained under professionals while competing alongside the best high school football players in the nation.

“It was shocking at first [getting invited]. It didn’t feel real,” Ayze said. “It is just a whole different atmosphere. I got used to playing a specific game style here in Shiprock. Going out there everything was different. You have to be playing your top game …

“I never thought I’d be in that stadium let alone walk on the turf or play at that stadium,” Ayze said. “It felt really good to be able to say I played in an NFL stadium.”

While Ayze was amazed to have had the opportunity to play at Dallas, his only wish is that he could have played at Heinz Field, since his favorite team is the Pittsburgh Steelers. However, his late grandfather, a former football player and a source of great inspiration to Ayze, was a Cowboys fan, so he knew his grandfather would have been happy.

When it was time for the ending football game, Ayze would be elected to be the captain of his team.

Shaytoya was able to come and watch the final game.

“Jayson, he is not to be messed with,” she said with a chuckle. “He is like a big wall. No one can get through him. In order to get through him people on the other team have to put up three guys against him. When he wants to get something done, he will do it and if he can’t do it, if he gets beat during a game, he will practice 110 percent so that does not happen to him again.”

By the end of the trip, Ayze would receive two Erik Bell Memorial Awards, naming him as MVP for both offensive and defensive player.

Coach Clah considers the Blue-Grey game a success and reports he is already getting calls from institutes asking about Ayze.

Clah is happy to have had Ayze and was proud that Ayze was the one that got to represent Shiprock High, its football program, his family and the community when he went to Dallas.

“He’s definitely a huge asset and he did extremely well for us,” Clah said. “He did everything we asked him to do and he performed a lot harder than the expectations we had for him so that’s what he earned the awards that he did and the nomination to the All-American game.”

The event gave Ayze a taste of what it would mean to be a NFL player and he hopes one day it will come true, particularly if he can play for the Steelers.

“Being able to see my little brother playing in an actual NFL stadium was unreal, it felt like a dream,” Shaytoya said. “I really don’t think it has hit all of us yet. Because of everything going on, since it was so last-minute and he just graduated, everything is still like a blur right now. But it was definitely something to experience and it was probably one of my proudest moments being able to watch him play in a NFL stadium, even if it was the Cowboys … We are all just so proud of him. I know my late grandpa would be really proud of him.”

For now, Ayze’s new goal is to go to college and study exercise and sports psychology.

“I just want to let everyone know that nothing is impossible if you put your mind to it,” Ayze said. “It can get you whatever you want. Two years ago, I would have never thought this was coming. I just want to say I believe in every single person, every single athlete, or if you are trying to achieve something, anyone can do it.”