Taylor Murphy did not perform her best during the Fort Lewis College women’s cross-country season.

After a winter break of training, though, the Window Rock High School graduate became a valuable contributor for the track and field team this spring. She competed in the 3,000-meter steeplechase and 1,500-, 5,000- and 10,000-meter runs. 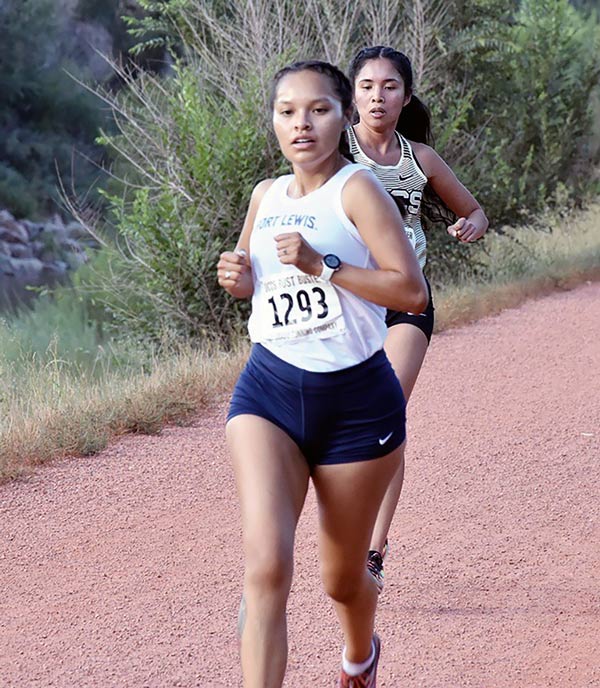 Submitted
Taylor Murphy, a Window Rock High graduate, became a valuable contributor for the Fort Lewis track and field women’s team. She competed in the 3,000-meter steeplechase and 1,500-, 5,000- and 10,000-meter runs.

“I was happy with what I got to experience,” said the junior, who ran cross-country for two years for Central Arizona College. “I think I have a lot more goals for the next year.”

She wasn’t in ideal shape for cross-country, according to Brett Sublett, Fort Lewis head women’s cross-country and track and field coach.

Murphy competed in just two cross-country meets, in September. She said she was hobbled by a foot injury.

“I was wearing shoes that did not have the arch support I needed,” she said. “It was a lingering pain. I had to stop (running) completely.”

The winter break was her chance to make up ground, and she took advantage.

“She kind of became much more motivated and dedicated,” the coach said. “She had to train harder and more consistently.”

Once recovered, she competed regularly for the track team. She set a career best of 12 minutes, 50.93 seconds in the steeplechase during the Rocky Mountain Athletic Conference outdoor championship, where she placed 12th.

She was second among the Fort Lewis entries. In the previous meet, she finished third in the event.

“That event can intimidate a lot of people. It’s very difficult,” Sublett said.

The steeplechase is Murphy’s favorite event.

“It’s more challenging,” she said. “It gives you more of an obstacle to overcome.”

She said she improved the most in her body positioning after going over the barrier before the water pit.

“Your forward momentum is vital,” the coach said. “You’re landing on one foot and going back into that running motion, which is not very natural.”

The 10,000-meter race is her other preferred event.

“The 10,000 is very physically and also mentally challenging. It’s a lot of laps around the track,” the coach said.

Because of all the laps, Murphy said it is hard to keep track of her position in the field. Her strategy was to stay near teammates for the first half of the race because the coach said being conservative worked to her fitness base.

“I use them as a gauge for myself,” she said. “It’s definitely go out and stay with them, try to stay close together. Don’t get too discouraged if you’re in the back.”

The second half of the race was where she would make her move to finish strong, although she said she needs to improve her ability to pass other runners.

Murphy finished sixth among nine in the 10,000 at the Robison Invitational, her time a personal best.

“I am feeling more confident,” she said. “I believe in myself that I can go out and be fast and be more competitive.”

During the summer she will remain at school to train on area trails and to increase her volume.

Last summer her high mileage total was 50 miles a week, she said, adding, “Maybe I can get to 60 for this summer.”

“The higher volume and higher altitude translates to good results,” Sublett said. “Running the trails, it improves your form. You have to have a strong upper body and strong core to run these trails.”