The Thoreau track team got a big boost on Saturday at the Tohatchi Cougar Invite.

With an influx of new talent, the Hawks filled almost every event at the five-team invite. 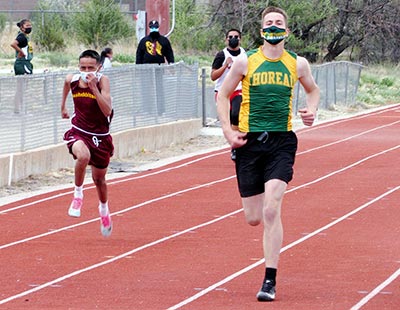 Navajo Times | Quentin Jodie
Thoreau junior Patrick Garoutte finished first in the 200-meter dash with a time of 27.84 seconds at the Tohatchi Cougar Invite on Saturday. Garoutte also won gold in the boys long jump with an 18-foot, 9.5-inch effort.

“The goal was to get the kids back out because we didn’t have a season last year,” Thoreau coach DeJong DeGroat said. “It’s great to have the kids that we have out right now. To have them participate again is pretty special because the pandemic really shut us down.”

DeGroat said a lot of track programs this year have experienced low numbers due to the pandemic and his team is no stranger to that anomaly. Before COVID, the Thoreau coach said he would have over 50 kids and this year that number dropped to just over 30.

“I was afraid our kids would not come back, but some of them came back today and they showed really well today,” he said. “I’m very happy with their performance and a lot of them had their first meet.”

DeGroat was initially worried about how they were going to fare but based on a handful of top 5 finishes they exceeded his expectations.

“They have the talent and they all have a good foundation,” DeGroat said. “If you put those two together you have pretty good athletes.”

As one of the meet’s coordinators, DeGroat did not have time to look over the results but he was impressed with the showing of senior jumper Jalena Begay.

In her first meet of the season, Begay won the triple jump with a 32-foot effort, surpassing the provisional standards of 27-11 in Class 3A.

With her attempt, Begay is a shoo-in for next month’s state track meet, which is scheduled for June 16 to 18 at the University of New Mexico Track-Soccer Complex in Albuquerque.

“I’m pretty sure I’ll go,” Begay said of making state. “I want to try and medal there.”

Her attempt was the fourth best according to nm.milesplit.com among 3A jumpers.

Begay also made some noise in the 100-meter dash as she finished first with a time of 15.84 seconds.

“I’m pretty close to hitting the (provisional) qualification mark,” Begay said. “I just need more confidence and if I can keep PR-ing I can make state in that event too.”

In the coming weeks, Begay is looking to add high jump to the mix as she hopes to get qualified in multiple disciplines.

“She’s a solid athlete,” DeGroat said. “You can put her anywhere and she’ll do very well. I’m very proud of what she did today. She stretched at 32-feet and at state two years ago she was a 31. She’s already PRd for the past two years.”

Two years ago, DeGroat said Begay got qualified in the high jump, triple jump and 200 meters as a sophomore.

He’s expecting her to meet the provisional standards in those events in the coming weeks, starting with the Crownpoint meet on Friday. On June 5, Thoreau will be at the Rehoboth meet, followed by the District 1-3A meet, which is scheduled for June 11 at Zuni High School.

In addition to Begay, junior Patrick Garoutte made the provisional standards in the long jump with an 18-foot, 9.5-inch effort on Saturday.

Previously, he hit a mark of 17-09 at another meet two weeks ago.

“It’s just my form,” Garoutte said of his big improvement. “I’ve never really done long jump but I’ve been focusing on my form.”

Last year before the track season got canceled due to the pandemic, Garoutte said he hit the qualification marks for both the 4×400 relay and pole vault.

“It’s pretty fun but it’s really hard on your body,” Garoutte said when asked about the demands of competing in the pole vault. “There is a lot of technique involved.”

The Thoreau junior said he wouldn’t mind doing the sport again but of all the meets they’ve attended this year none of the schools had the equipment to do pole vault.