Some Diné players sit out fight in all-star FB game 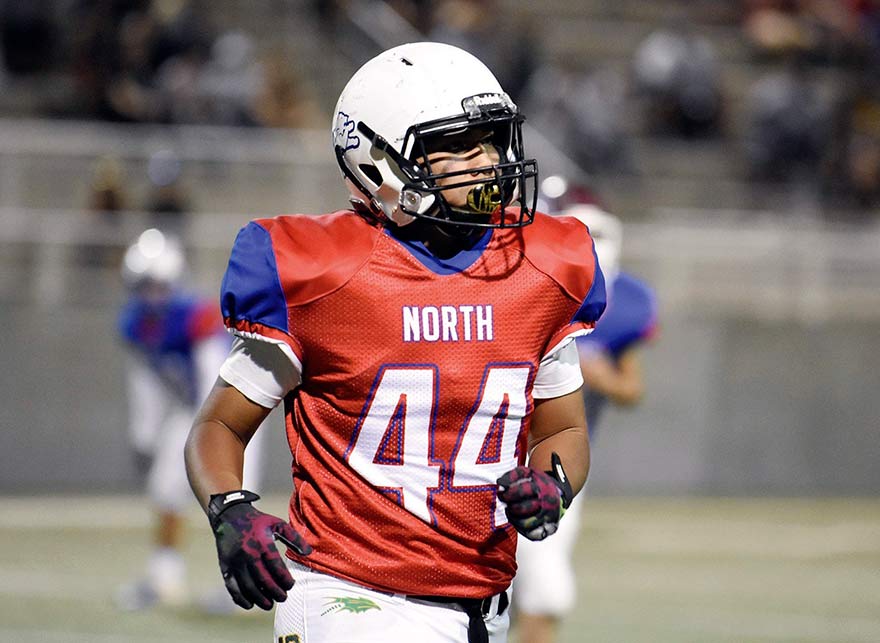 Newcomb graduate Kelkenny Watchman makes his way off of the field after making a play in the third quarter of the 2019 New Mexico High School Coaches Association Small School Football All-Star game in Albuquerque.

While the final score was in the South’s favor, Mario Trujillo, from Santa Rosa, one of five assistant coaches for the North team, said the game was a lot closer.

“We were talking to other coaches before the game and they were saying the South had so much talent,” he said. “I think our boys changed their minds. At the end of the game, we did a good job of limiting their offense. We wish we could have scored a few more points, but we were in there.”

After battling most of the first quarter, the South set the pace for the game with less than three minutes. They scored a touchdown on 20-run by Nicholas Cobos from Dexter High School and the South team.

After an incomplete kick, and the end of the first quarter, the South led the North 6-0.

The North made numerous attempts in the second quarter to get to their end zone but fell short.

With 20 seconds left in the first half, the South team found themselves 16 yards from a second touchdown on a first down when North’s Zachary Maynes from Clayton intercepted the ball in the South’s end zone. The South led 6-0 at the half.

The North team opened up the third quarter with a few defensive stops, and on their third possession, inched their way close to the end zone. About 28 yards from the goal line, the North team kicked a field goal to trail 6-3.

The South team went on to score another touchdown before the third quarter close. The South team led 12-3 after three quarters. The South scored again in the final seconds of the fourth quarter to end the game 19-3.

The game ended with a tackle by the South team, which some members of the North team deemed foul, and led to a fight.

Trujillo said it’s become a common occurrence in the all-star football games, but he thought the North team handled it fairly well.

“I think these kids, because they wanted to finish and play the game, kept their composure,” he said. “They took care of what they needed to on the field.”

While the majority of both teams rushed to help their teammates in the squabble, a handful of North players stayed on the sidelines.

Three of those players were from Newcomb: Tyler Ellison, Kelkenny Watchman, and Tracy Bryant.

Bryant, 18, said his instincts and lessons learned from his time playing for Newcomb kicked in.

“My instinct was to go over there and help, but where I come from, it’s not like that. During our season, coach always told us to don’t do stuff you shouldn’t be doing because you’re representing our school,” he said. “I didn’t bother to jump in there and too, myself, I’m not that kind of person.”