The thing I love’: Navajo sound-mixer/studio engineer living the dream 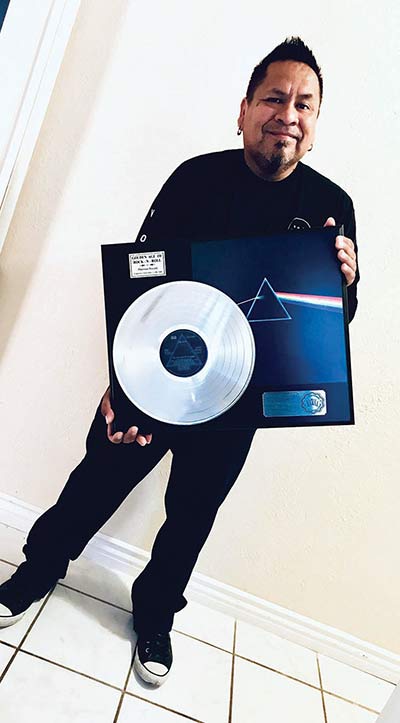 Sam Morris pictured with his 2018 Platinum Album Award for the Pink Floyd re-master/remix of “Dark Side of the Moon.”

By the time Sam Orion Morris was in high school band, he knew that music was his passion. “This is the thing I love,” he said to himself at that time.

Today, Morris can pick up pretty much any instrument and play, a skill that he puts to use as a production and stage manager for major touring acts, music festivals, and as a sound-mixer/studio engineer.

“I’m living my dream,” said Morris, now 48. “I work in the music industry.” He divides his time between Los Angeles, the Navajo Nation, and on the road travelling with big-name touring acts and recording projects. Morris was raised in a small town near Barstow, California, where his dad worked at a U.S. Marine Corps logistics base and his mom worked at a rocket factory in Hollywood.

His roots are in Lukachukai, Arizona, where he spent summers as a child with his grandparents and where his parents have returned to in retirement. “You can’t keep me away from this place,” said Morris. “As a child I didn’t care about the mountains, or the trees, or the flowing river down by my grandpa’s place. Now I appreciate everything.”