To the unassuming person, Dean Becenti may look like he’s just recording a local game on an IPad.

He is seated among the regular audience and looks particularly young. But in actuality, he is carefully recording every move and every play of the athletes. 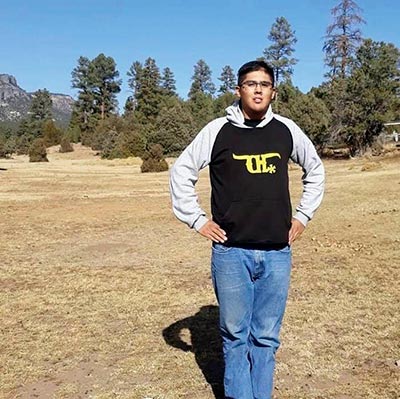 Submitted
Videographer Dean Becenti has been making video highlights for a number of athletes, from the high school basketball players to professional bull riders. His YouTube channel has received over 900,000 views.

Later he will diligently edit the videos, selecting the best bits, maybe add some music and then upload the finished product to his YouTube channel.

What he just made is a “highlight,” and those highlights just may get the athletes he recorded the attention they deserve.

For the past five years, Becenti has been attending games at Window Rock, Chinle, Ganado, and beyond recording basketball games. He also makes highlights for bull riders, sometimes being invited to up-and-coming professional bull riders’ homes to highlight training.

With family friend Bill Sandoval, who’s been watching games long before Becenti was even born, they traveled to many games and many highlights came from their work.

Thanks to Bill, Becenti was able to see twice as many games then he had the year before.

In just two years since Becenti officially started making highlights, his channel has received over 900,000 views, just short of a million. He also has a growing subscriber base numbering 2,140.

“It’s surprising, it’s a blessing to see this many people discovering my stuff,” Becenti said. “That’s something I’m proud of, getting close to a million.”

“He’s done a lot of work with those highlights, and because of that, I believe it helped our kids a lot,” he said.

In Becenti’s sophomore year, he moved to Window Rock, where, at the same time, Mendoza started coaching there as well. They have remained in contact for the past six years.

“I find it very unique that he does what he does,” Mendoza said. “He likes sports and also is doing it because he wants to give the kids a chance, give them the exposure that they deserve.

“And because of that, I think he really has done an excellent job in the area where he’s helping a lot of kids getting the opportunity to play at the next level,” he said. “He’s very good at what he does.”

According to Mendoza, most kids in the Navajo Nation don’t get enough attention. He links this to the remoteness of the Navajo community, which contributes to the lack of outside media coverage.

With Becenti’s videos, though, he believes they’re making a difference. Some of his best players from last year, Cooper Burbank and Curtis Begay, both had highlights made by Becenti and both players are now in college.

And even better, one of those viewers was a coach from Sagu American Indian College in Phoenix. The very same coach, Robb Floco, informed Becenti that it was his highlight that got his attention, and now Smith is a part of the team and attending Sagu.

Becenti’s videos also helped him to make great friends in the process, like Cody Jesus, PBR bull rider, ranked No. 67 in the world.

The two met at a Window Rock basketball game but Cody didn’t approach Becenti until afterward, since Becenti was busy filming the game.

He requested Becenti to make a highlight of him and some friends, inviting Becenti to his home. From there they became good friends.

Cody even introduced Becenti to more athletes like bull riders Cannon Cravens, No. 63 in the PBR world ranking, and Andrew Alvidrez, No. 23.

As professional riders, they had had highlights made of them before, though not in the same way as Becenti.

“The way he did it, he got all my rides together, added some music to it, and it was really cool,” Alvidrez said. “And making highlights like that is important for us professional athletes because the brand building is everything.

“And the more people see the videos out there, the better the athlete has at getting endorsement or sponsor or any sort that will help you along with your career,” he said.

Becenti’s love of sports could very well be a family trait.

His grandfather, John Becenti, competed in many rodeo events, and his side of the family still competes. They were what sparked Becenti’s interest in the sport.

His great-uncle, Pete, drove Becenti and his mother to local games they would all watch together.

Another great-uncle and a uncle are assistant coaches, one coaching in Monument Valley, and another at Window Rock.

His aunt also played basketball with St. Michael back in the day. A cousin-brother recently played with Monument Valley.

Lastly, his mother, Natasha Becenti, was a cheerleader at Window Rock and always supported the players.

She fondly told Becenti how the boys and girls varsity basketball teams won the state title the year she graduated in 1995.

“I guess what drew me in was going to the games and being around basketball a lot,” Becenti said.

Becenti owes a lot to his family, especially his great-grandparents, Kee and Elizabeth White. While his mother was taking classes at Diné College in Tsaile, his grandparents baby-sat him at his home in Wheatfields.

They taught him much about his culture, and because of that, he can proudly say he is fluent in Navajo and that he was born for the Maii deeshgiizhnii Clan.

Another thing that he treasures are the memories of him and his mother watching basketball games and supporting his mom’s old school, Window Rock.

“If you look at how much basketball games had at the Wildcat Den and it brings all these people in from all different age groups,” Becenti said. “Little toddler children and all the way up to the elders and just everybody goes there to support them and, yeah, it brings people together from different communities.

“And that’s why we have these big facilities on the reservation like the Wildcat Den and Ganado Pavilion,” he said. “It’s the same thing with rodeos. They also bring people together, so, yeah, sports, they really unite us as people.”

Becenti enjoyed the games and eventually joined the basketball team himself in middle school.

Sadly, Becenti lost his parents, stepdad, Jesse, in 2008, and his mom in 2013. He moved to Window Rock to live with his grandma, Lynda Becenti. He continued playing basketball under coach Mendoza, but he stopped playing after his junior year.

Despite the losses, Becent still had a passion for sports, and he wanted to help the athletes as well. Not long after that, he started filming.

Even now, during the COVID-19 pandemic, Becenti is using footage from last year’s season to make highlights and updating his older videos.

“To show them that I want to help them get more exposure for college recruits,” Becenti said.

He said a big inspiration for him making the videos during the pandemic came from one of his favorite basketball players, Kobe Bryant. Bryant’s mentality of always working and doing his best is what Becenti says keeps him going as he makes highlights for local athletes.

Even though sports may be on hold, his friends and supporters wish him luck as he continues to help students, even during these difficult times.

“Because of the pandemic, everything was put to a stop,” Mendoza said. “And because of that, the videos (highlights) will continue to help with exposure for some of the kids coming back. I think that is something that would help in the future with the seniors coming in this year.”

Back when there were still games going on, even though Mendoza didn’t look out for him, he knew Becenti was there filming his players.

“A lot of time we take him for granted,” Mendoza said. “Cause what he does, he does so well we don’t worry about it, but I know he enjoys what he does. Every time he does something, I know he’s going to get the job done.”

“It’s kind of cool, you know,” said Alvidrez, “like he’s our support base, we always know he’s watching so it gives us more motivation to ride so he can have something to create.”

Although plans for a sports season is up in the air right now, Becenti is not deterred.

Once the pandemic ends and he can attend the games again, he will continue making videos. He’s even planning on expanding his content and covering more games. He is determined to help the athletes get the attention they deserve.

“I think this is my calling, and I just feel like I’ll be doing this for a long time,” he said. “I just hope it will grow with all the content I make and keep building my subscribers up and getting more recognized myself with my YouTube channel.”

“Honestly,” he said, “I think this is just the beginning for me.”