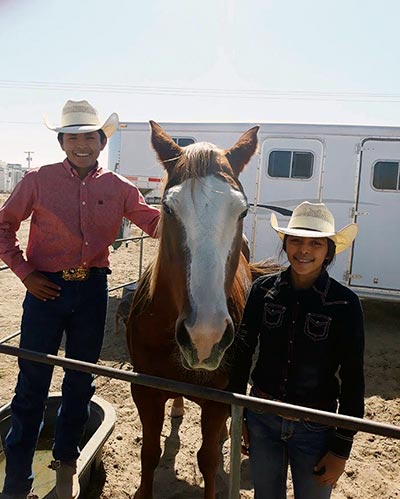 With the summer rodeo season taking a backseat due to the coronavirus pandemic, Tyrone Tsosie didn’t know what to expect when two of his children signed up to be new members of the New Mexico High School Rodeo Association.

“Rodeo kind of faded for us because of the pandemic,” he said. “We weren’t able to do any kind of rodeo during the summer.”

With that his 14 year-old twins – Tydon and Tara – experienced some early nerves in their first high school rodeo two months ago.

Despite coming into the association as somewhat unknowns, the two Crownpoint High freshmen looked like veterans on the final day of the Landmark #3 High School Rodeo in Mesquite on Sunday.

Tydon started things off with a third-place finish in the steer wrestling, downing his steer in 19.640 seconds.

“I just threw it down to get points,” said Tydon, who pushed his year-end standings total to 18 points at the conclusion of the fall season.

Tara later added a second-place finish in the goat tying, posting her fastest run of the season with a 7.69 effort.

“I’m just so happy,” Tara said. “I’ve worked so hard to be in the sevens and I finally did it.”

To get that fast run, the Crownpoint cowgirl said her dismount was much better from her previous run on Saturday when she tripped up as she approached her goat.

In addition to her dismount, Tara was ecstatic with her groundwork even though she gambled a bit.

“I gathered the legs a lot better but when I finished my tie it was kind of loose,” she said. “I’m just glad the goat didn’t kick.”

Of the eight rodeos she’s competed in, Tara has earned points in seven. Nevertheless, she’s looking to be more consistent with her runs as they have varied from the 8- to 11-second range.

“The girls I compete have a lot of experience,” she said. “They’re all consistent and they don’t mess up. They’re always getting good times.

“I want to really work at getting faster ties like I did today,” she said of her final run.

Admittedly, Tyrone said he doesn’t spend a lot of his time working with his daughter at home.

“She makes the time to practice on her own,” he said. “She’s either doing her groundwork or doing her dismounts. She’s also out there exercising the horse. With her discipline she kind of takes a load off of me to where I can work with her brother.”

Despite not spending a lot of time with her, the Tsosie patriarch said he’s still encouraging her.

“I always tell her to put a little more hustle in her event,” he said.

Tyrone said he’s proud of his daughter for sticking to goat tying even though she struggled with finding the right horse to compete on.

“She’s gone through several of our horses,” he said. “For awhile she tried out my horse (Easter) but it just didn’t work out for them because he’s probably too strong for her.”

After testing out a few more horses, Tara has found a connection with the mare they are currently hauling.

“We’ve had her since she was born,” she said of Bit-O-Honey. “She’s working really good with me.”

“It felt good to get my steer down,” Tydon said.

His dad was especially proud as Tydon won the round and at end of the two-day rodeo he finished second in the aggregate race.

“That was a good feeling,” Tyrone said. “He’s got a taste of it now and he got a chance to take home a first-place check.”

More importantly, though, Tyrone said it gave his son some needed confidence.

With the fall season coming to a close, Tyrone said his kids have adapted to the rigors of competing in their events.

“They’re getting more comfortable being out there,” he said. “Before I think they were kind of real nervous. Now, they’re out there competing against those seniors, juniors and sophomores.”

As a member of the association, they are required to maintain a 2.0 GPA with no F’s to stay eligible. So far this semester the two siblings are earning A’s and B’s.

“They have online classes and they’re making the grades,” Tyrone said. “They also find the time to do practice with their rodeo events and running.

“I’m just so proud of them,” he added. “They’re all doing this on their own. I think it’s in their hearts to do this. It’s something that they do naturally and they’re making things happen.”