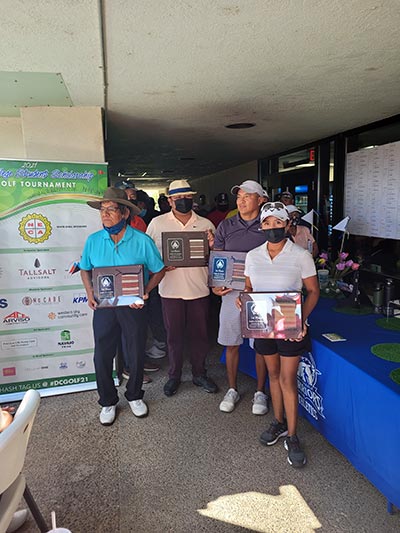 Saturday morning started off chilly but as the day wore on at the Piñon Hills golf course golfers participating in the Diné College Scholarship Golf Tournament heated up the friendly competition.

By its end, Diné College President Charles Roessel declared the event a success. They had such a large influx of sponsors with companies and individuals volunteering. Sponsors included Navajo Engineering Construction Authority, Tallsalt Advisors and Navajo Pride.

Roessel said they expected about 74 participants; instead they reached the max capacity of 114 golfers.

At the awards ceremony after the luncheon, Roessel thanked all the participants for attending and supporting the students.

“We raised nearly $50,000 dollars for the college,” Roessel announced to applause. “When you put that in perspective, that means 100 full-year scholarships for our students. They don’t have to worry about going to pay their bills with everything happening so it’s really wonderful what you’ve done.”

Roessel also thanked the Dine College students who volunteered and helped prepare the course. The volunteers woke up at 4 a.m. to get the course ready for the golfers. Later they walked the course to ensure there were no problems – walking because there were no carts available.

Awards were given out to the top three teams that included foursomes that played the whole course. There was plenty of golf talent among the many players and that resulted in a tie for second and third place, which was settled with a coin toss. Both teams carded a score of 54 for the day.

Winning the coin toss and awarded second place was the team of Olsen Arviso, Orville Arviso, Larrison Whitehair and Miles Whitehair. They won pottery handmade by a Dine College student.

The first-place team – with a score of 53 points – was the team of Ray Begaye, Lisa Begaye, Darryn Ben and Darren Harwood.

Former Navajo Nation President Russell Begaye was expected to compete with the team alongside his brother Ray and niece Lisa, but Begaye was unable to attend and Harwood stepped into his place.

The first Diné College Scholarship Golf Tournament took place in 2019 in Phoenix. The second event was delayed because of the pandemic.

During that time though, Diné College was able to secure a place at Piñon Hills. Roessel said Piñon Hills was more convenient as it was closer to home. This year they set up hand sanitization stations and staff wore masks and encouraged participants to play safe.

Roessel said about 60% of the funds raised will go to the college’s sports program for sports scholarships and to purchase sporting equipment for the student-athletes as well.

“What’s really nice is that all these sponsors, they’ve given scholarships also, so in addition to what they give the college they’re still investing, so that means a lot to us,” Roessel said. “They don’t say, ‘We gave already, that’s enough.’

“They also give a sponsorship to raise more scholarships so I think that idea is what I think we’re very excited about, that they were reciprocal of giving.”

First-place winner Ray Begaye said it was a good day to golf with a nice breeze and a bright sunny day. He credits the win to his family and friends, who are experienced in the game. His daughter, Lisa, is a two-time state champion for New Mexico and a Canadian amateur champion.

He thanked his brother, Russell Begaye, for putting the team together in the first place and the Piñon Hills staff for maintaining a good course.

“I encourage the Navajo Nation people to participate in golf because you’ll grow healthier and (it’s) a great way to connect with family and friends and a good way to exercise also,” Begaye said. “Just the fact that the Navajo Nation needs to be healthy, and this is one way of doing that.”

With the success of the tournament, the college is certain to host the scholarship golf tournament again and make it an annual event to raise more scholarships money for their students. Roessel said he hopes the event will take place at Piñon Hills again.

“We’re just thankful that people came out,” Roessel said, “We’re happy people have fun and that’s something we really like.