Ramah wins district showdown: ‘This is a state championship team’ 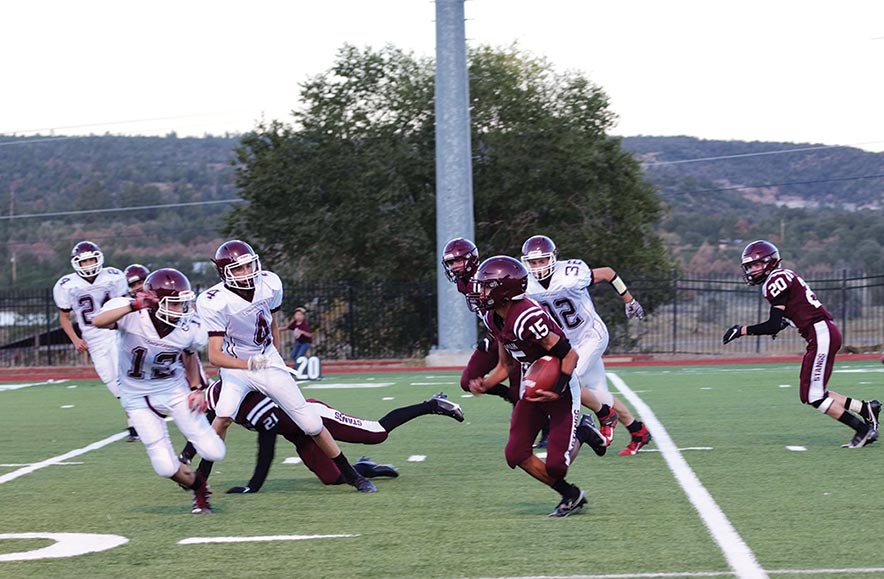 Submitted
Ramah senior quarterback McKay Evans (15) runs the ball against the blended team of Roy/Mosquero in the district title game on Friday night. Ramah improved to 5-0 with a 23-13 win.

The six-man state playoffs will have an eight-team bracket.

The Ramah football team punched its ticket by winning the district title on Friday night over the blended team of Roy/Mosquero.

The Mustangs never trailed but their defense came up huge to post a 23-13 win during homecoming.

“The game was intense,” said Ramah coach Shane Evans, whose team improved to 5-0. “Roy had two fumbles inside their own 10, which cost them, but we went in there and we hit them hard.”

After mercy-ruling three previous opponents, the Mustangs received a stiff challenge from the visiting Blue team.

“They’re a physical team,” Evans said, while noting that his team had issues running the ball in the opening half.

Evans said Roy had a middle linebacker that gave them problems and one of his hits sidelined Ramah starting quarterback McKay Evans for the entire second half.

“It’s one of those things to where you hate to pull him out,” Evans said. “But when in doubt we had to send him out, and we should have him back for our next game.”

In the opening half, Evans said they were missing their assignments with their blocking scheme that allowed the Roy player to cause havoc.

In the second half, however, the Mustangs made the necessary adjustments.

Junior Bowdy Evans led Ramah with two touchdown receptions, one going for 25 yards and the other for 12.

“He had a couple of huge catches,” Evans said of his pupil. “He caught one over the top of two guys.

“We just high point the ball on the helmets and he has some catches in critical times that allowed us to keep the ball and continue to run the clock,” Evans said.

All told, Bowdy had eight receptions for 104 yards. He also rushed the ball six times for 25 yards. Defensively, he had 15 tackles.

“He’s probably our most standout player on the team,” the Ramah coach said of Bowdy.

The Mustang’s other score came from senior Whelan Clawson, who broke free for a 50-plus yard TD.

“We went up the middle and made a hard-nosed run for a touchdown,” Evans said of Clawson, who rushed for 102 yards on 15 carries.

Clawson added two receptions for 16 yards and on the other side of the ball he tallied seven tackles.

Before leaving the game, McKay Evans completed 5-of-9 passes for 72 yards and two TDs. Defensively, he chipped in nine tackles.

Evans said he started coaching them five years ago when they all played one year of junior high.

“The high school didn’t have a football team that year because there weren’t enough boys,” he said. “The following year we took the same group of guys and put them on the varsity team.”

Prior to this season, Evans said the team has had some success, but they were still too young.

“Obviously, when you play 18-year-old boys we had it rough for the first couple of years,” he said. “Since then, they’ve grown and now I have them as seniors and juniors. This is the most seniors we had.”

In addition to the aforementioned players, Evans said center Josh Sackett and senior Wyatt Clawson are part of the core players that started on the junior high team.

“Basically, these boys have been playing together for the last five years,” he said.

Evans said they have their eyes set on winning a state title. Since the school reopened in the mid 1980s, Ramah has played in six state title games, winning in 1995 and 2001.

On Friday, the Mustangs will make its case when they travel to Roswell to play five-time state champ Gateway Christian.

“Gateway Christian is a very, very tough team,” Evans said. “They’ve got size on the them and they’ve got athletic kids. They’re very fast on offense and I know they’ll score on us. We just need to contain them enough to where we outscore them.”

Evans said the winner of Friday’s game will most likely earn the top seed for the upcoming six-man playoffs, which start Oct. 22.

“It’s pretty important to try and get that homefield advantage,” he said of earning the No. 1 seed. “We both should get a semifinal game and but if we meet in the championship game we would have to travel to Roswell if they beat us this coming weekend.”