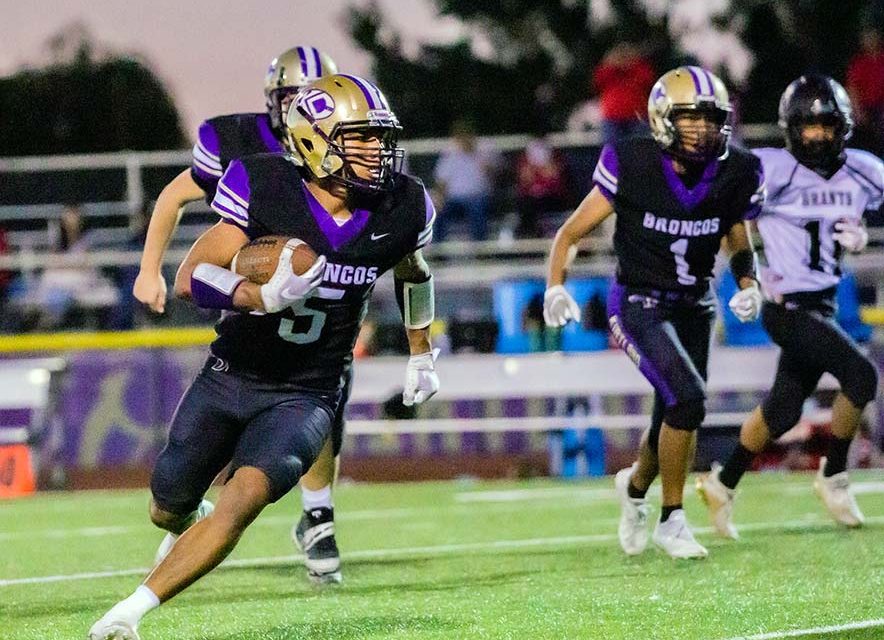 Navajo Times | Cyrus Norcross
Kirtland Broncos Zakk Thomas (5) gets the ball handed off to him and runs the ball forward against the Grants Pirates on Sept. 24. The Broncos defeated the Pirates 63-14. Earlier this year, Thomas set a school record by scoring eight touchdowns in one game.

Zakk Thomas says he’s not your typical running back.

The Kirtland Central senior is listed at 5-foot-10 and weighs about 180 pounds.

“I’m not that very big, but I use my speed and agility to help me run the ball,” he said. “I think that is what it takes to be a good running back.”

His speed and agility played a big factor in helping Thomas set a new school record. The KC senior went rampant and scored eight touchdowns against Taos on Sept. 3.

His record-breaking night, however, didn’t start off on the right foot as he coughed up a turnover.

“We got the ball first and I ended up fumbling the ball,” Thomas said. “I thought it was going to be one of those games. I was thinking that but the second time I got the ball I exploded for a 50-yard touchdown.”

To cap the first half, Thomas added four more scores as KC led 35-3 at the break. He tacked on three more in the second half as Thomas finished with 396 yards on 25 carries and seven touchdowns.

“He’s got great quickness, and he’s got a great move,” he added.

That move, Thomas said, is a jab step.

“It helps me out a lot,” he said, while adding that technique is used to dodge defenders.

“If I’m running outside, I usually sprint across the field,” he said. “As soon as I’m ready to jab step that defender would go that way and I would make him miss. I use that to get more yards.”

Thomas said his exploits wouldn’t have happened without his linemen and wide receivers.

“They were making holes and gaps for me,” he said of the KC linemen. “As long as I can get an opening, I can hit that hole.”

As for his wide receivers, Thomas said: “They were blocking for me when I would bounce outside. They had some good blocking too.”

On that particular night, Schaum said Taos had five defenders in the box, allowing the Broncos to exploit Thomas’ speed.

“With them lining up like that we were gonna hand the ball off to Zakk all the time,” he said.

Since that game, other teams have keyed on Thomas.

“After that happened everybody started to put six, seven guys in the box to take Zakk away,” Schaum said.

The KC coach said Thomas is the model student-athlete and his teammates really look up to him.

“He leads by example and that’s the thing that you like to have,” Schaum said. “The other kids around rally around him because of who he is but he’s one of the most humbled kids you would ever know.

“He owes all of his success to the offensive line and receivers, and you wouldn’t know that he scored eight touchdowns in the game, unless you asked,” he added. “He’s just one of those guys and he’s a pleasure to be around.”

In addition to Thomas, Schaum said Bronco kicker Kyler Joe set a school record against Taos when he nailed 9 PATs.

“He’s up there too,” Schaum said. “Kyler also plays soccer, so when he’s done he comes over to kick for us.”

Schaum said that’s the only job that Joe does but in a few games he’s had to make some tackles.

“Soccer right now is big for him and we’re not asking him to do any more but kickoff and attempt the extra point,” he said. “I think he’s got a Division I leg. He can actually go to college and go kick. He’s that good.”