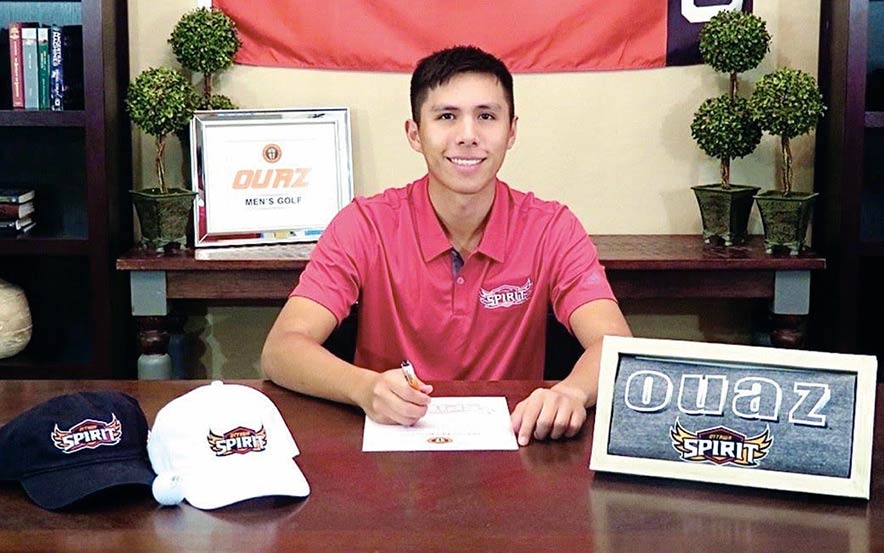 Submitted After years of playing baseball, Tysho Tano transitioned to golf five years ago and his hard work has earned him a spot to compete for the Ottawa University men’s golf team in Surprise, Arizona.

When Tysho Tano first started golfing he wasn’t sure how he would do. For a baseball player to transition to golfing was a challenge, but Tysho always loved a good challenge. Now, five years after he first started, Tysho has made a name for himself and he has signed on to play for Ottawa University in Surprise Arizona.

“I don’t mean to sound cocky, but in the back of my mind I knew I had a chance because I put in all this hard work and many sacrifices,” Tysho said. “I gave up many things, time with my friends, time with my family in order to golf. And I remember thinking, I know I can do this, but at the same time there was still that level of uncertainty…When I got the offer I was like, ‘Yeah I knew I could do it,’ but inside I was like, ‘Oh thank goodness.’”

Tysho was focused on baseball at first, but that changed when he was at his maternal grandparents’ house one day.

“I was in the back yard doing yard work with my grandpa Gilmore, Frankie Gilmore, and he was like, ‘Hey, grab some golf clubs and I’ll teach you something,’” Tysho said. His grandfather showed him how to swing a club and other tips. “So, eighth grade was when I was first introduced to golf and I fell in love with it instantly.”

When he entered Millennium High as a freshman, he played baseball for a bit, but then switched to the school’s golf team where he met the boys head coach James Lotts.

“When he came in as a freshman he was very raw, but he had a lot of natural talent,” Lotts said. “Over the years he caught the golf bug and just constantly kept working on the game, hitting balls, working with some different golf coaches and constantly trying to improve his game. He has grown in leaps and bounds. He is a tremendous golfer. Now he has the opportunity to play college golf at Ottawa University.”

Tysho said he selected Ottawa as it has a good golfing program, close to home and its location will allow him to meet with his personal swing coach as they continue to hone his golfing skills. Tysho isn’t certain yet what he wants to study, but it’s likely to be physics related.

During Tysho’s young career he has won multiple student-athletes awards from his school such as the Prestigious Golfer of the Year award at Millennium High School, academic recognitions and in 2019 he was named in the First Team in Sports360AZ All-Academic Golf Team, making him one of the top high school golfers in the state.

The journey hasn’t always been easy for Tysho as he had a lot to learn when he first started.

“In baseball, it’s much easier to swing a bat or throw a ball,” Tysho said. “But in golf there are so many different variables and a lot more consequences.”

Although Tysho loved the sport, he faced stiff competition. In his freshman year when he began golfing, he was having second thoughts after a bad game.

“I was so frustrated cause I was like, ‘Man I really want to be as good as these guys,’ Tysho said. “I was like, ‘How come I’m not where they’re at?’ My mom, she just talked to me and said that its OK because those guys have been playing their whole lives and that is why they are so good and my mom said to just keep working at it, just because they are better than me now doesn’t mean they are better than me overall.

“So that inspired me to keep going and keep getting better, I ended up doing a lot better and scoring the same score as the best kid on the other team in my junior year.”

It wasn’t all work and no play, because golfing is something Tysho enjoys very much.

“I love how difficult it is,” Tysho said. “I love how it’s very technical and it requires a lot of precision both mentally and bio-mechanically and I just love being out on the golf course, it’s very pretty out there. I love spending time outdoors, just the scenery around it, the green, the hills and the landscape. It’s very beautiful out there.

“The biggest thing that golf taught me was to accept my flaws because golf exposes how flawed you are very fast Because you never, never have a day where you hit good all the time, it taught me to be ok with my flaws and to just keep working on it and not to be hard on myself all the time, because if you are too hard on yourself it doesn’t make the game fun.

“And another thing is to not give up, there have been so many times when it has gotten so hard that I felt like giving up because of the competitor, cause all the other kids are way better than me because they’ve been playing their whole lives and I’ve only started recently.”

“Naturally in his academics he’s always been a leader,” Chelsea said. “He wants the other students to be up there where he is and he turns around if a student isn’t understanding and he is always willing to spend that extra time to help them if they need anything and vice versa if he ever needs help, he reaches out to his fellow peers and he sees it more as a collaboration to work together and gain knowledge together, this what I see him do in school a lot.”

Rocky also noticed how not only was Tysho great with his friends, but he was a great student for his teachers as well.

“We saw a pattern from a young age to middle school to high school where he would leave a very lasting impression on a teacher,” Rocky said. “It’s always like, ‘Hey you know this is why I taught, to meet someone like Tysho’ and they say so many nice things about him, just about his personality and what he does to the classroom and his influence on other kids.”

Coach Lotts remembers one time when after a match Tysho was resting in the school van waiting to be picked up when he noticed the school’s band loading up their heavy equipment. Without asking, Tysho was up and helping the band load their gear.

“Tysho as a person is, if not the best, then one of the best individuals I have ever been around in the 14 years I have coached golf. He is just a tremendous human being,” Lotts said. “His teachers always rave about how good a student he is. What I described of him on the golf course is the same description teachers have used of him in the classroom.”

“I am just so proud of the young man he has become and the opportunities he has,” Lotts said. “All of the opportunities he has is through his hard work. As a coach that’s all you want, you want these young men to enjoy themselves while they are golfing, to have a passion for it and to grow as good people. And that’s what Tysho is. It is like I said, as a coach he made me a better person so I have the utmost respect for Tysho and his family. His family is tremendous and phenomenal.”

Tysho’s ultimate goal is to be a professional golfer and compete in the PGA Tours. He hopes to get into the junior competition after college before working his way up to the big leagues.

“That would mean everything professional, but it’s been everything I’ve sacrificed for in the past four years and I just love golf,” Tysho said. “It’s my dream job so it would mean the world to me, being able to say I’m going to do this and then doing it that would just be amazing.”

Tysho’s family is grateful for their son and all that he has done, giving thanks to friends and family who has helped him along the way.

“We’re just ecstatic and grateful for what Tysho was able to do. Ever since the time when Tysho was a little boy we always taught him, you go and be successful, but you always remember where you come from,” Rocky said. “Remember who you represent, your Navajo side and all your sides. He’s also Japanese, Pilipino and white, so I said you represent all those cultures respectfully and when you’re on a bigger stage you always keep that in mind, your success and your victories are theirs as well. They paid the price for you to be here and that’s how you look at it that’s how you see it, you give your respect to them, by being an athlete and a person with integrity, doing your best and being a student with integrity and an all-round good person and that’s how you pay respect to your ancestors.”

Tysho’s name came from his paternal grandmother’s side of the family. Its Japanese and it means ‘great leader,’ and ‘great future.’ Tysho’s parents are happy that their son naturally fits the title.

“To anybody whose feel like they’re not competent or feels like the risk is too high to do something they love or to follow your dream,” Tysho said. “Life is too short to live someone else’s dream or to not go for your own dreams. Take the risk; it just might be the best thing you have ever done.”