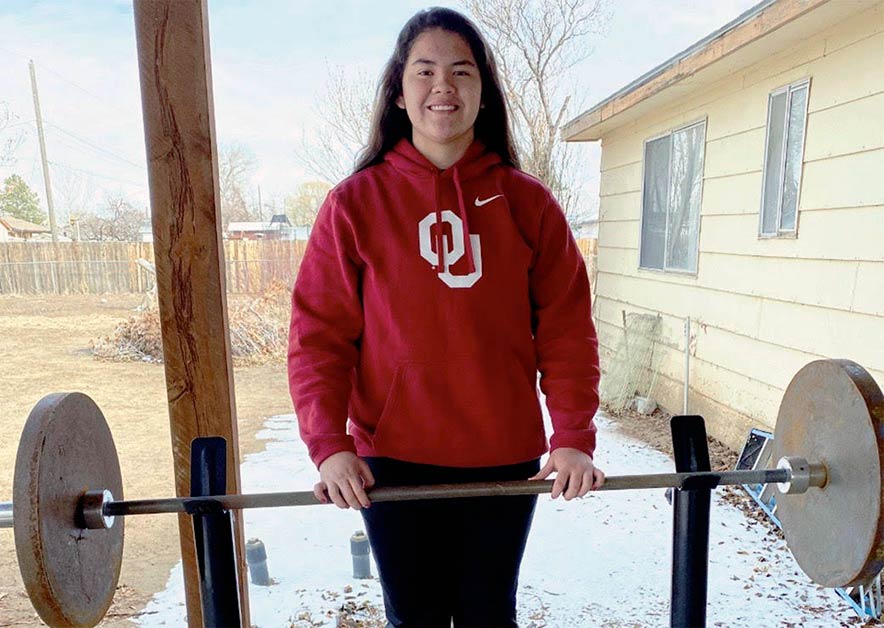 Submitted
Nessa Begay, a senior on the Shiprock girls’ powerlifting team, won the state title in the 242-pound weight class. Begay improved all her marks in squat, bench press and deadlift in the inaugural season.

It took Asheton Hadley a week to consider joining the powerlifting team at Shiprock High.

Hadley was skeptical about whether she would benefit from lifting weights, but after four months of training the Shiprock senior is now urging others to join the emerging New Mexico prep sport.

“It’s just a really, really great sport to be in,” she said. “It will improve your endurance and it will help train your body to take and do more.”

The co-ed sport recently finished its state competition earlier this month with the Shiprock girls’ team faring well. The Lady Chieftains took fourth in the team competition with 24 points as they had two individual state champions, one reserve and a third-, fourth- and seventh-place finisher at the conclusion of the inaugural state meet, which was held virtually.

Her teammates – Kai’ulani Clah and Nessa Begay – were crowned state champs with Clah taking the 220-pound division and Begay winning the 242-pound title.

“For my first year I didn’t think I would have placed that high,” Clah said. “I definitely improved in all of my events.”

Begay said winning state was no easy task, as she had to discipline herself since her workouts had to be done at home due to the ongoing pandemic.

“It really depended on us wanting to get better,” she said. “We had to do the workouts if we wanted to lift heavier.”

Despite having no weight sets at home, Begay still found ways to complete her workouts, sometimes using her own weight for resistance.

Shiprock coach Anthony Clah said it’s remarkable that his athletes were able to complete their workouts even if they didn’t have the proper equipment at home.

“They did the best they could with what was available,” he said. “I’m just amazed they were able to do the workouts under these conditions. That’s pretty remarkable.”

Clah said they had one virtual meet in November and for about three months they sat idle as the New Mexico Activities Association was following the no-contact state health orders established by the New Mexico Department of Health.

“Normally, if there was no COVID restrictions we would be going to meets,” he said, while adding that the pandemic may have lessened the impact of this new emerging sport.

“To be honest, I think this would have been a bigger deal for the kids if they were able to see others competing,” he said.

Nonetheless, the Shiprock coach said he was really pleased with the progress his athletes made during the season, particularily Kai’ulani Clah and Nessa Begay.

“They both improved their numbers, which is remarkable because we only had five in-person lifting sessions because of the Navajo Nation health orders,” he said. “What I ended up doing was I would send them pictures of the workouts and then they would text it back to me once they completed them.”

Anthony said Begay was his most dedicated lifter on the girls’ team.

“She completed her workouts every day so I was excited to see her lifts when we got to state,” he said. “She made 60- to 80-pound improvements over her previous scores.”

Begay said she started the season lifting 155 pounds in squat, 115 in bench and 225 in deadlift. At the state competition, the Shiprock sophomore finished 175, 125 and 260 in those disciplines for a combined 560-point total. 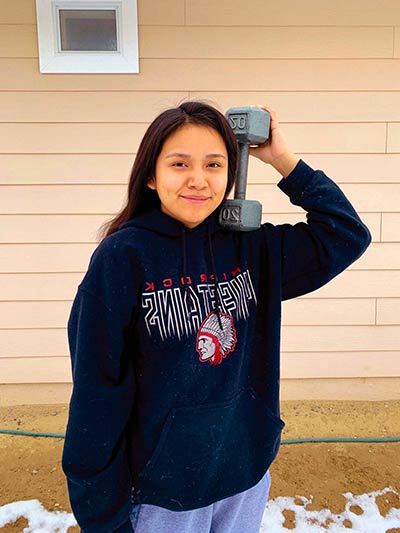 Submitted
In the inaugural New Mexico Activities Association girls’ powerlifting season, Shiprock senior Asheton Hadley finished as the reserve state champion in the 132-pound category. She had a combined score of 250 points in squat, bench press and deadlift.

“I was really happy with what I did because I worked so hard,” Begay said. “I was hoping to lift more because I think I could have done better.”

Kai’ulani, meanwhile, finished with a combined 540 points at state, squatting 200, benching 105 and deadlifting 235.

Of the three disciplines, Kai’ulani said squat is her favorite event.

“I like it because I played soccer for a majority of my life,” she said. “I think that has always been my strong suit.”

“I’m very weak with upper body strength but I’m actually surprised that I got that high for bench at state,” Kai’ulani said.

Because deadlift involves upper body strength, Kai’ulani said she doesn’t care for it as much.

“For deadlift, you got to use your legs, back and your shoulders so it’s not my favorite,” she said. “It’s hard for me to focus on my lifting.”

At 132, Hadley also saw gains in what her body could handle as she had a combined score of 250 points, earning marks of 80 pounds squat, 55 in bench and 115 in deadlift.

“I’ve gotten so much better,” she said. “When I first started I could only lift the bar for bench and now I’ve added 10 pounds.”

“She’s a determined kid,” Anthony Clah said of his pupil. “She actually plays basketball and she has developed some work ethic coming from basketball.”

The Shiprock team also had a few male athletes compete at state but they struggled in the statewide competition. Their best male athlete took sixth in his weight class lifting 993 pounds.

With those discrepancies, Anthony said there is a big gap at where his boys are at with the rest of the state.

“That is one of the reason why I wanted to start the powerlifting team at Shiprock,” he said. “I want our boys to see why we struggle at football because the rest of the state are lifting at these weights while we’re trying to compete with them lifting at these lower weights.”

Anthony said he finished the inaugural season with 13 kids, two more than he started with. He’s looking to grow the sport.

“I definitely want more numbers but since we started this sport the NMAA hasn’t decided when powerlifting will occur next season,” he said. “A lot of coaches that offer the sport don’t want to overlap the sport with football.”

At the same time, Anthony said, they don’t want to take it away from the other sports that have already been established.

“We’re trying to find a time frame that works for everyone,” he said, while adding that there is talk about having the season during the summer.

“A lot of coaches were suggesting that but that would be during our football offseason,” he said.

Nonetheless, the Shiprock coach said he was glad that the NMAA added powerlifting, a sport that’s right up his alley.

After earning his bachelor’s degree from BYU, Clah came home to coach. With no openings in the football program, he coached the volleyball team for three seasons.

“After three years I felt that I still didn’t know enough about strength and conditioning so I went back to get my master’s degree and I became a graduate assistant at BYU,” he said.

He also assisted with lacrosse, football and the men’s basketball team.

He designed programs for those teams and not long after he graduated, BYU hired him full-time.

He was then offered the head position at BYU-Hawaii, where he was in charge of 11 programs.

“That is where I get my passion from, being able to see athletes learn and grow,” he said. “Strength and conditioning is my bread and butter, inside and out.”