Rez golf gets discovered in Steamboat 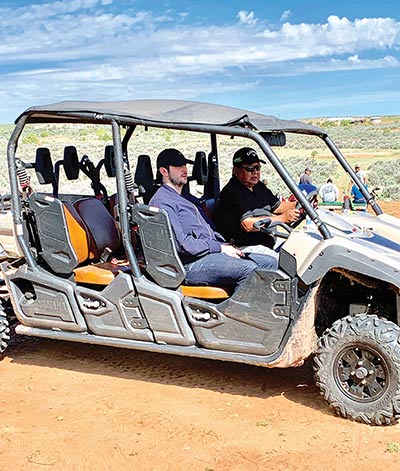 While all eyes were focused on Shiprock, trying to get a glimpse of the filming of “Jumanji 4” or “Bios,” another film crew was working 132 miles to the southwest, largely unnoticed.

A film crew from VICE Media was out at Steamboat’s Wagon Trail to Lonesome Pine Golf Course last weekend for the series “Home Course,” which, according to VICE producer Mark Infante, tracks down “unexpected golf courses and the people behind them.”

“Home Course” is a partnership between VICE and equipment manufacturer Callaway Golf Co. The show’s first season last year focused on Edgefield, a resort built on the site of a former poor farm in Oregon; a course in Nebraska founded by a community of golf-loving farmers; and Langston Golf Course in Washington, D.C., one of the first desegregated golf courses in the country that has given many African-Americans their entrée to the sometimes elitist world of golf.

Wagon Trail to Lonesome Pine, created by a trio of Navajo friends in 1996 (coincidentally just a year before the Nebraska course) was a “perfect fit” for the show, said Infante, who was on hand for the shooting Saturday.