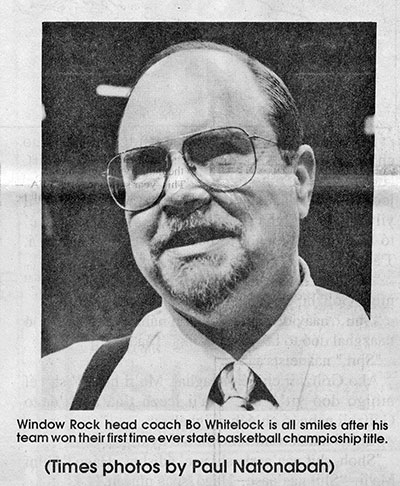 Former Window Rock coach Bo “Bear” Whitelock, passed away on the morning of Dec. 21, 2021. Window Rock High honored him that day at their home game against Monument Valley.

Whitelock had a long career in education, starting in 1975 at Mesa Junior High. He taught at high schools in Lake Havasu, Ajo, Duncan, Window Rock, and in Tempe. He became an administrator at Ajo High and held positions like athletic director and principal.

He worked at Window Rock High for about 12 years as an assistant principal, district athletic director, and activities director. He coached the both the boys’ and girls’ basketball teams for a time and was also the assistant volleyball coach.

He made great efforts to get Arizona coaches and athletes recognized nationally, and helped start tournaments and created bonds between different schools.

For all his achievements, he always made his students his priority, as told by his wife Kim Whitelock.

“Bo as a person was such a loving, caring, gentle heart,” she said. “He was very good, trustworthy and very down to earth. He’d tell you as it is.

“He was always the type of person who said, ‘If you listen to me, you’ll be successful,’ but he’d always did it with a caring, loving and real patient way,” she said. “Sometimes I asked him how he is so patient with kids; but that was his nature, he knew how to talk to kids.”

Two of his former athletes and students are brothers Lamoni and Lawrence Yazzie. They were both on the team that won Window Rock’s first state title. After high school they’d play collegiate basketball for the U.S. Air Force Academy.

Lawrence is still in the military, achieving the rank of colonel and working within the National Guard Bureau at the Pentagon.

Lamoni served as a civil engineer and is now working for private companies, often as the general manager or director.

Both brothers credit Whitelock for helping them succeed.

“I thought he was a very needed individual, coach and teacher,” Lawrence said. “An individual who was instrumental in my young life”

Whitelock was aware of the hardships kids faced on the Navajo Nation and did everything he could to help.

Often, he went beyond expectations by not only giving kids a pat on the back but also buying them food if they were hungry. He did everything he could to help set them up for the future.

Lamoni remembers that Whitelock always had an open-door policy. He welcomed anyone into his office and listened to what they had to say.

“The biggest influence was that he cared,” Lamoni said. “And he believed in not only the basketball team but the other kids he taught, other folks he came across.

“He had a big heart and he had a bigger laugh,” Lamoni said, “and that’s contagious when someone shares so much about others and enjoys life, enjoys what he is doing and everyone fed off of that.”

What Lawrence took from Whitelock was visualizing goals and striving for the milestones, coordinating what needs to be done and how to achieve it.

For Lamoni, it was becoming a team leader, recognizing a person’s talent and how to use it, and getting people to work together to make a cohesive team in order to get the job done.

“He instilled certain values, especially tracking where we want to end up and the milestones it took us to get there and coordinating directly on how to do my job today,” Lawrence said. “And I am working at the Pentagon where we have to do plans of actions and make decisions that ultimately leads to a mission accomplishment.

“And that is a very big thing that started off small on a basketball court in Window Rock,” he added.

Both brothers remember their time playing with the Fighting Scouts and what a state championship meant. It was a special moment that Kim said Whitelock remembered fondly.

“I always remember when he first won the state title his first impression was that he was happy for the kids, the community and the school,” Kim said. “I know he was greatly honored to be a part of that state championship team and there are times he still talks about it….

“I know he was very proud of his team,” she said, “the school and the community for what he and the boys did.”

Lamoni said Whitelock’s influence would continue for years to come.

Lamoni remembers people laughing about his dreams of playing professional basketball. Only Whitelock believed and encouraged him, and now Lamoni is encouraging his own children and passing on Whitelock’s teachings. His daughter is already signed on to join the Air Force Academy’s swim team.

“I know through that celebration of his life and all the things he was able to do, I know his memory will not be forgotten and his teachings and his compassion and his love will never be forgotten,” Lamoni said. “My thoughts and prayers go out to his friends and family.”

Lawrence was of the same mind.

“To me he was defined as an individual, as a person who grew young men into warriors, who drove the warrior ethos into something greater,” he said. “And for me, now still continuing in the military, I am blessed to have known him, to be taught by him.

“I will surely miss him and have wonderful thoughts of the time he spent on the earth,” he said. “I wish him well on his next journey and wish Kim the best with hers.”

Kim is happy for the time she spent with her husband, for watching all he did for the community and seeing the Window Rock community in turn embrace him.

He always loved and respected the Navajo people and culture and that “a piece of his heart was always with the Navajo Nation,” said Kim.

“Bo will be missed by a lot of the communities he coached and worked at and with all of his characteristics,” Kim said. “That’s who he was as a man and as a husband.”

She added, “He was a great husband to me, and I just went along with his teachings. I’m very proud to have spent the last 22 years with him and enjoyed every minute of it.”