Rick Baker coached student-athletes for more than 30 years. During that time, he has led the Hopi Junior-Senior High School boys’ cross-country team to many victories, earning them national fame with their 26 consecutive state championships. 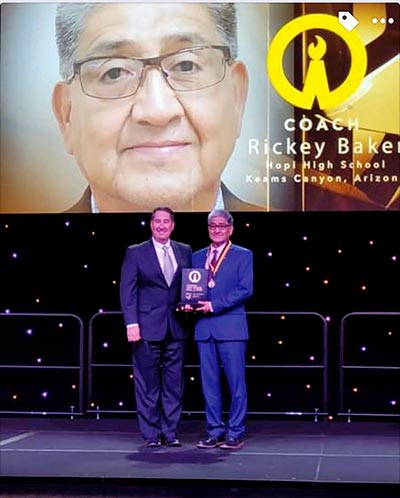 Now in recognition of his work with his kids, the National Federation of State High School Association has elected Baker to be placed in its National Hall of Fame.

Baker is the ninth athlete from Arizona to be placed into the hall of fame since its creation in 1982 and he may be the first Hopi native to be inducted as well.

Despite all the success, Baker never thought he would be recognized as one of the best coaches in the nation. He was too busy focusing on the kids to worry about that.

“I’m very fortunate,” Baker said. “Very lucky to have had great kids that were willing to try out for the cross-country program and put in the work, the blood, sweat and tears as we say.

“It is an honor but I’m still humble about it,” he said. “I just like to say this hall of fame is pretty much shared with a lot of people – my friends, my mentors, people I worked with, my family, my wife Deborah, my two sons and especially the kids that come up for the cross-country team.

“It’s a great honor, but like I said I have to be level headed about it also,” he said, “to be humble.”

Baker’s journey started in 1974 when he attended Winslow High. It was here he started to play basketball, football and eventually ran cross-country.

At the NFHS ceremony on July 1, he remembers the lessons taught to him by his own coaches.

“And to this day I followed that advice all the way up to my four years in high school and I think that was the inspiration I needed,” he said. “I needed someone to say to me to wake up. This is who you are, this is your goal, this is your dream, this is your life, this is your career, this is what you’re going to be and I took that to heart and this is what I try to instill in the kids that I work with.

“It is that hey, find yourself, find your purpose in life and let’s ride it from here on out,” he said.

While at Winslow, Baker was a member of the state cross-country team in 1976 and was Arizona’s one-mile champion in 1977.

After graduating he went to college in Kansas for two years before transferring and running cross-country for the University of Central Oklahoma. He graduated with a bachelor’s degree in science and education.

He moved back home and first started teaching at Keams Canyon Boarding School school for three years before transferring to Hopi Junior/Senior High in 1987 where he would begin coaching the boys’ cross-country team.

Although the streak was broken in 2017, they have been runners-up in state for the past three years. The Hopi cross-country championship winning streak is the third longest in any sport in U.S history.

Baker also coached the boys’ basketball team for 18 years, winning a 2A state title in 1997. He also trained the girls’ and boys’ track and field teams for the past 10 years. Nine of his track and field athletes have won individual state titles.

Running is a major part of Hopi tradition and Baker used it as a part of his training for the boys.

“Hopis are known as good distance runners so when I talk to the kids, I bring that up,” Baker said. “I use it as a part of my motivation that you are born with this DNA from your ancestors, from your grandfathers and from your fathers and your mothers.”

Whenever Baker gets a new team, he always tries to teach them one thing that they could carry with them after leaving high school.

“To be successful,” Baker said. “Once they leave high school, once they’re on their own, that they can survive and thrive at that and that they learned to be good fathers, good husbands, good brothers, good uncles, and they go back to their villages and that kind of life skill, it will all come into play. I wish them a good life, a long life, a strong life.”

The 38th induction ceremony for the hall of fame was held in Orlando on July 1. Baker stood alongside 11 other prominent athletes and coaches from across the nation who were also being recognized.

The athletes were asked what made their jobs worthwhile and most of them agreed it was the relationships, the bond formed between friends and coaches.

Baker recounted when he was in college how uncomfortable it was traveling on a bus from Arizona to Kansas. He made a promise that he would never ride a bus again.

Starting in 1986 though, he rode buses every weekend for the next 36 years. Despite the food stops and bathroom breaks every 10 miles, Baker said he enjoyed that time and built bonds with his teams.

“Like we said the relationships we build with these kids, you have them for four years since they come as a freshman and by the time they graduate, they become 18 years old – they become mature,” Baker said.

‘“You encourage them, you inspire them to be successful in life and I think that’s the one thing I preach at,” he said. “Success is different to all of us and we have to find that, that set purpose, and that’s what I try to instill in these kids that you have to find your purpose in life.”

During these years, the one thing that coach Baker always enjoyed was spending time with his athletes and coaching them.

“It’s the kids, going to work every day, a couple of mornings thinking, oh man, I get to do what I enjoy, I get to run, I get play ball, I get to work with these great kids after school and we’ll practice and practice hard, and I know those kids are working hard and are going to be successful as an athlete, as a runner and just building that friendship with these kids.

“With kids, it makes you feel young, being with them all day and then on the weekend when you go to the meets and the races, you’re with them all day and I think that’s what it is,” he said, “building relationships and being around these young kids and then succeed whether it’s in the races or when they graduate and go to college. That’s what I get a kick out of, just being around the kids.”

Baker has many people to thank from his wife, Debbie, to his two sons, his fellow co-workers, teachers, coaches and the whole Hopi Reservation.

“There a lot of thanks to give, like I said, a person doesn’t succeed on his own,” he said. “It takes a village to raise a kid and me being a kid of the village and growing up and my journey, like I said this is shared with everybody I had contact with, I am proud but I am still humble about it.”