‘You just have to believe in yourself’: Shiprock bull rider takes another shot at world title

Itching for another shot, Shiprock bull rider Julius Y. Begay is back at it again.

The revered icon is in his 14th season competing in the National Senior Pro Rodeo Association. Since joining the association in 2008, he’s won a dozen world titles.

“I still have the urge to get on a bull,” Begay said when asked about his longevity in the sport. 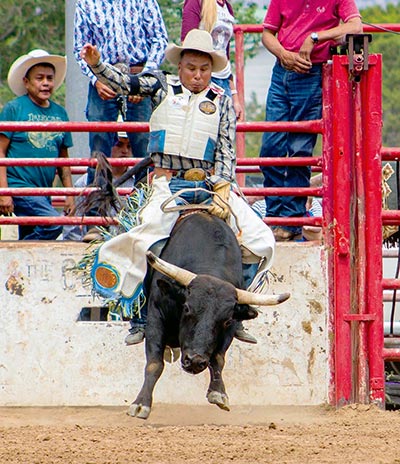 Of course, his mental and physical fitness plays a big part in that as Begay went 2-for-3 at the NSPRA-sanctioned rodeo in Grants over the Fourth of July holiday.

He placed second on the opening day with a 70-point effort and in the next round he added a 73-point ride, which tied him for second with Crownpoint bull rider Melson Casamero.

“You just have to believe in yourself,” Begay said. “I love doing this and if I ride (for 8 seconds) the rest will take care of itself.”

At the conclusion of the three-day rodeo, he didn’t make the whistle but his efforts earned him some points in the year-end standings.

According to the NSPRA website, the Shiprock cowboy was sitting third in the 50-plus bull riding world standings with 63 points prior to the Grants rodeo.

“That’s always the plan,” Begay said of making another trip to the world finals.

Farmington bull rider Roque Velarde is also looking to make that same trip later this year as he finished second in the world standings during the 2020 season in the 40-plus division.

“I was the reserve world champion,” said Velarde, who turned 43 on Monday. “I rode all three of my bulls at the finals, so I was the average champion.”

Admittedly, Velarde said he didn’t think he would be riding bulls after initially retiring from the sport 15 years ago. But that all changed when he pondered his upcoming retirement from the Farmington Police Department.

Velarde is set to retire later this year after serving 21 years on the Farmington Police force, working his way to a senior-level position as a staff sergeant.

“Working for the police department is great,” he said. “It’s been really rewarding for me. I grew up in Estes Park, Colorado, and through 21 years I really got to know the community members and I established a lot of good friendships.”

That friendship extends beyond the people in Farmington as Velarde has created a bond within the bull riding community. 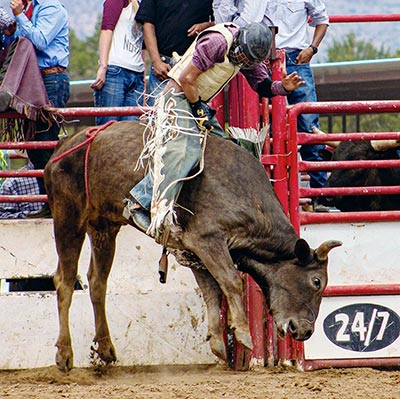 Navajo Times | Cyrus Norcross
Melson Casamero bears down during his ride on July 4 during the Wild West Days Rodeo. Casamero did not make the whistle on Sunday during the National Senior Pro Rodeo Association sanctioned event.

“We’re all good buddies,” Velarde said of his rapport with Begay and Casamero. “We practice together during the week. Julius has an El Toro bucking machine and I have a different style bucking machine at my house so we’ll get together once or twice a week to practice a little bit.”

Velarde said it’s nice to have both Diné cowboys as practice partners. Sometimes they’ll travel together and hit rodeos in the NSPRA and the Professional Senior Rodeo Association.

“We look out for each other,” Casamero said. “We take care of each other and after a good ride we congratulate one another. We cheer each other on.”

Casamero, who is set to turn 43 in September, joined the two senior rodeo associations at the behest of his two friends.

“I was semi-retired and Julius said to give it a try,” Casamero said. “They told me they get to go to a lot of places and it’s a lot of fun, so I bought my card.”

Needless to say, the Crownpoint cowboy was hooked.

Casamero said he’s been with the NSPRA going on three years. He didn’t get a chance to rodeo his first season as he dealt with a major groin injury.

Last season, he hit only a handful and that was due to profession, working in the construction business.

Nevertheless, he made the finals in Missouri with Begay and Velarde.

“We all did good,” he said. “We took the most money. Roque won the average and Julius won the world.”

As for Casamero, he placed third in the average race.

With Begay having the most seniority, Casamero said he really admires what the Shiprock bull rider has accomplished in his 40-plus years of rodeoing, which includes 18 world titles.

“He’s an inspiration to me,” Casamero said. “He’s helped me out a lot with rodeo whether it be physically or mentally. We help each other out. We pull each other’s rope and we encourage each other when we’re in the chute.”

The Crownpoint cowboy said it’s hard to fathom someone like Begay to continue this well beyond 50 years old.

“Most bull riders retire about 30 years old but it’s up to the individual on how far they want to take it,” he said. “It’s all mental and physical and, you know, Julius still has that. He’s my motivation and he still rides like he’s 20 years old.”

At the Grants rodeo, Casamero covered 1-of-2 bulls as he missed the first day due to work.

Velarde, meanwhile, covered all three of his bulls, winning first in each performance.