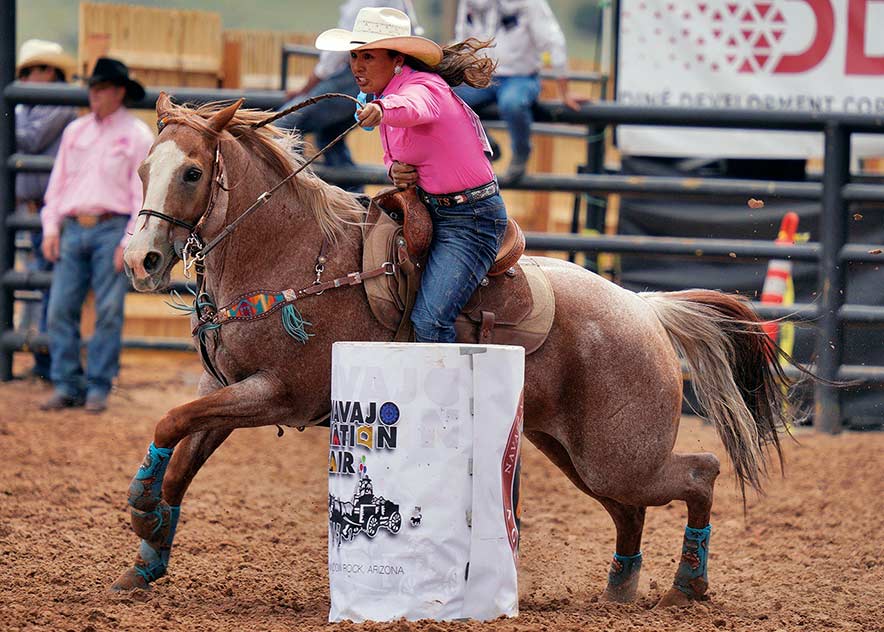 Navajo Times | Donovan Quintero
Barrel racer Tara Seaton sets her eyes on the last barrel after she gets around the second barrel at the 74th Annual Navajo Nation Fair in Window Rock. Seaton won a horse trailer by winning the women’s all-around race.

Michael Bates and Tara Seaton picked a good time to have a memorable Navajo Nation Fair.

They took the spotlight at the 74th edition, winning the all-around titles at one of the most prestigious Indian rodeos.

Afterward, they were awarded a pair of horse trailers following Sunday’s championship round performance at the Dean C. Jackson Memorial Arena.

She won the average by posting three runs in 52.56 seconds, beating out former fair champion Kassidy Dennison, who finished with a 52.80 time total.

“It’s been a while since I’ve won an all-around,” Seaton said. “This is the biggest win that I’ve ever had, and it’s so nice that it was here at the Navajo Nation Fair.”

Of her barrel racing exploits, she won the bonus round with a 17.68 run on her prized mare Gypsy Rez Rocket, which pushed her total over $5,500 mark.

“She was feeling it,” Seaton said. “The other rounds she walked up a little further and this one she wanted to take off in the back nine.

“I let her rip the alley,” she added. “Our first and second turns were a little wild, but she was just flying under me in the arena and I could feel it.”

As the average winner, Seaton said all the glory goes to her horse and there was no stopping her.

“I have so much faith and love in my horse,” she said. “She knew what she needed to do when she came to the arena today. She was at her best.”

Seaton won an additional $397.20 in the breakaway event on a barrowed horse from Kyle Little, missing the short-round cut by one spot with a ninth-place aggregate.

“I was kind of bummed that I didn’t make short round, but I knew that barrel racing was going to be our strength,” she said, “so we were going to give all we got.” 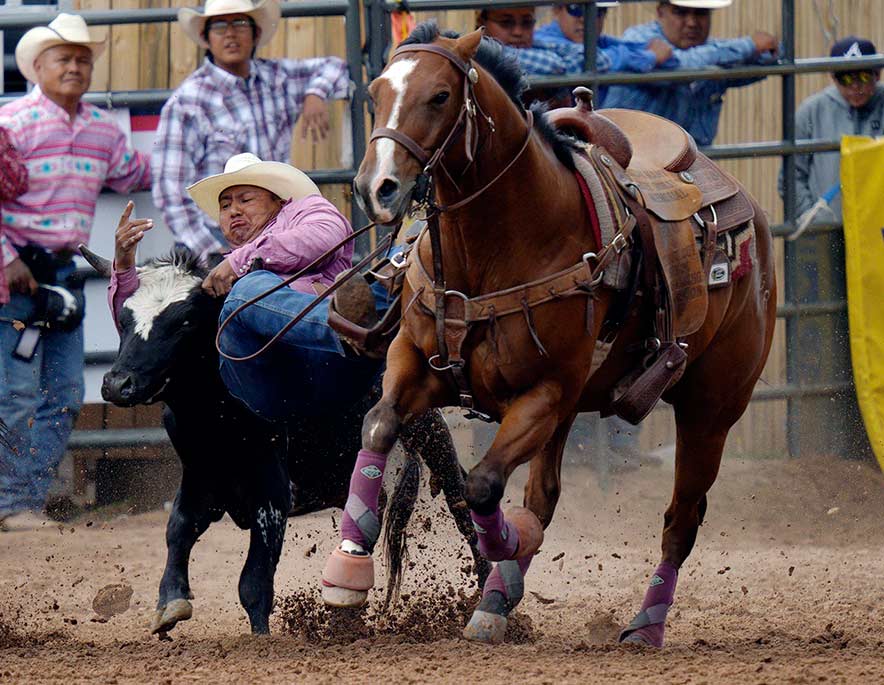 Navajo Times | Donovan Quintero
Steer wrestler Michael Bates wastes no time as he quickly leaps onto the steer to take to the ground on Sunday at the 74th Annual Navajo Nation Fair in Window Rock. Bates was crowned the men’s all-around winner.

On the men’s side, Bates finished with a bigger haul as he took home $7,600 by placing in three events.

Bates also placed fifth in team-roping and took second in the second round of tie-down roping.

“This is my first time winning an all-around trailer,” Bates said.

Ten years ago, he captured this same title but he was awarded a $2,000 bonus prize.

An although he tied for the steer wrestling aggregate, Bates lost the coin toss for the trophy buckle to Yazzie,

Nonetheless, he turned in a pair of great runs on Sunday, finishing third in the short round with a 4.60 run.

“It was a little bit stronger and he kind of beat me to the nose,” Bates said of his draw. “I kind of had a slow fall, and that is what got me.”

In the bonus round, he topped the 3.8 run that Matthew Jodie turned in with a much faster 3.5 run.

“Matthew set the bar high,” Bates said. “I just felt like I got out good, and I just heard everybody. I was just trying to hustle and it worked out.”

Bates was very appreciative that the fair was held again after a two-year hiatus.

“I think everybody was looking forward to it, not just me,” he said, while adding that the crowd on Sunday was electric with the house filled near capacity.

“I thought the crowd was pretty big this year,” he said. “It was more than the last time we had it.”