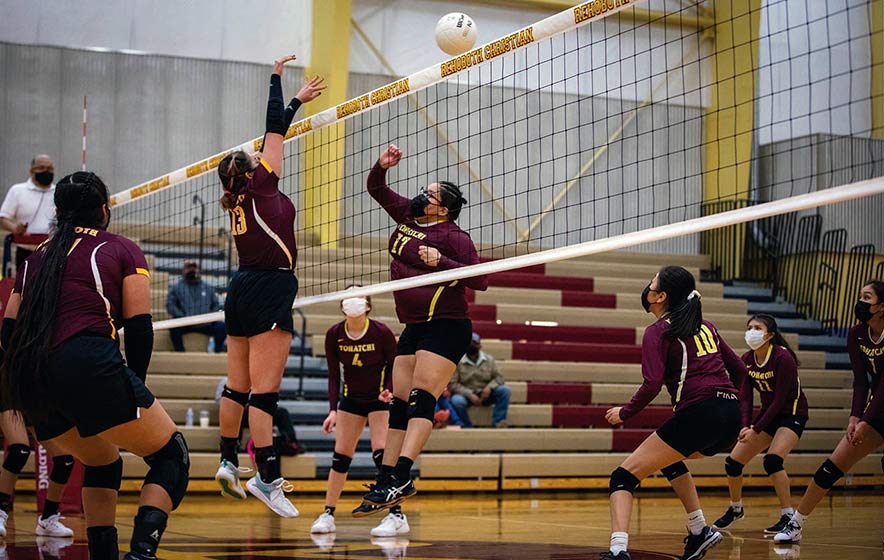 Navajo Times | Sharon Chischilly
Rehoboth middle blocker Jessica Triplett goes up for block against Tohatchi’s Aidan Brown on Saturday at Rehoboth. Tohatchi is currently in the driver’s seat for the four-team District 1-3A crown. Rehoboth, meanwhile, has Navajo Pine in its district this year.

The postseason for New Mexico prep volleyball, cross county and soccer remains in limbo as teams are about to wrap their regular season.

The New Mexico Activities Association has yet to receive confirmation from New Mexico Gov. Michelle Lujan Grisham on whether the state’s governing body for prep sports can sanction a state tournament.

“I’m still waiting word,” said Sally Marquez, executive director of the NMAA, in a taped interview that was released on Monday.

“We are very hopeful we’ll have a state event, but at this time at this taping, we do not have approval from the governor’s office to play outside our region,” she said.

If the governor does not allow the NMAA to sanction a state tournament, Marquez said they are looking at having teams end the season with an “event within the region.”

And while postseason play is still pending, some of the area teams are preparing as if there is going to be a state tournament.

“I know there’s going to be eight teams invited to state,” Thoreau volleyball coach Kyron White said, “but right now the governor still has to approve it.”

In Class 3A, five district champions will make state along with three at-large teams to complete the field.

On Tuesday night, the Tohatchi volleyball team pushed its league record to 3-0 in District 1-3A play by outlasting Crownpoint (1-2) in four sets.

The Lady Cougars now have an early edge at winning the four-team district with Thoreau (2-1) a close second, followed by Crownpoint (1-2) and Newcomb (0-3).

“I think our girls are feeling more comfortable about being on the court,” Tohatchi coach Edwin Brown said of taking wins over their district counterparts. “The girls are wanting to play volleyball and the extra effort they put in is how we’re getting through these teams.”

Brown said the district season is far from over and he’s looking to keep his team motivated as they go through a tough stretch this week, which started on Monday with 4A Aztec.

“The toughest part of this week is we’re playing back-to-back games,” he said.

The Cougars would have played at Tohatchi last night and on Friday they will host Navajo Pine to conclude a four-game stretch in five days.

“The challenge we have is we need to reset our minds and our bodies for our next game,” Brown said. “That’s going to be tough but we need to get through this week.”

“We’re taking each game as it comes, and we’re focusing on the game at hand,” Gallup coach LaRena Morris said of their early success in the district. “I think what’s helped is that everyone on the team is taking on that leadership role. It’s not being placed on just our team captains, so everyone is stepping up.”

The Bengals will close out the week with a pair of nondistrict games. They will host Farmington today and they will travel to Piedra Vista on Saturday.

“Playing those two Farmington teams is going to give us the push we need to close out the remaining three games we have next week,” Morris said, while alluding to the district games against Kirtland Central on Mar. 23, Miyamura on Mar. 25 and Shiprock on Mar. 27.

The two smaller districts will feature only two teams with Navajo Pine and Rehoboth vying for the title in District 1-2A while Pine Hill and Ramah will battle for the District 1-1A crown.

As for District 1-5A, Piedra Vista has already won that title after beating Farmington twice earlier this year.

“They beat us for the second time so they’re the district champs,” Farmington coach Lars Baker said. “They have the bid to the state tournament already. Eight days into the season they’re already in.”

With that, Baker said they’re looking for an at-large bid as his team hopes to improve on its 4-3 record heading into today’s matchup with Gallup.