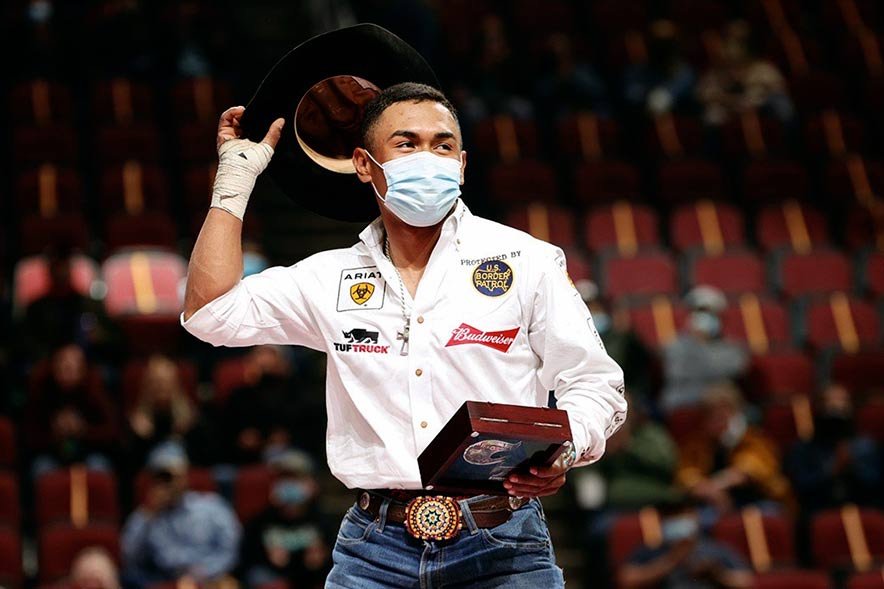 Keyshawn Whitehorse has spent the last three months looking for his first signature win for the 2021 PBR season.

Last fall, the McCracken Springs, Utah cowboy placed second at the 2020 PBR World Finals and through several events this year he wanted to polish up his credentials.

The determined Diné bull rider got that signature win after he captured the PBR Del Rio, Texas Unleash the Beast Event in an unlikely fashion as the event was delayed 27 days.

The event started in Texas but due to inclement weather it was postponed until this past Friday when Whitehorse covered his championship bull for 90.25 points aboard Lil 2 Train (Jane Clark/Gene Owen) at the Gila River Arena in Glendale, Arizona.

“This was a very big win, and it helped secure another milestone in my life,” Whitehorse said in an interview with the Navajo Times. “I was finally able to obtain an event win and it put me in prime position for a contention of a PBR world title this year.”

The Del Rio event win earned him a career high No. 3 atop the PBR world standings and at the conclusion of the Glendale event he dropped one spot to No. 4 in the world.

Whitehorse said his current ranking is the best he’s attained since joining the PBR in 2018.

“Every year it’s been kind of like a slow climb so the progression has been very great,” he said. “It’s good to see that I’m on the right track whether it’s mentally, physically or spiritually, and combining all of those things I’m just glad that I’m able to obtain this amount of success right now.”

His work, however, is not done as Whitehorse is looking to move up the world standings. So far he’s amassed 238.50 points, which is 123 points behind world leader Cooper Davis.

“I’m looking forward to obtaining more success throughout the season and really ramping it up even more,” the 2018 Rookie of the Year said.

“The temperature that day was not too kind,” the PBR bull rider said. “It was very cold and it even rained. It was a different obstacles for us to overcome.”

Despite the elements, Whitehorse rode Cherry Bomb for an 87-point ride, which earned him a three-way tie for third place.

“What I liked about that bull was he was very aggressive,” Whitehorse said. “I wasn’t going to hold anything back on him but there were a few mistakes I made in there. But, you know, whenever things aren’t perfect, effort and aggression kind of helps smooth out those mistakes.”

Fast-forward 27 days. Whitehorse got on his second bull and he didn’t quite make the required eight-second ride as he got bucked off American Gangster (Jane Clark/Gene Owen).

With his high score in his first round, he was invited back to the championship round and during the draft he chose Lil 2 Train. Admittedly, he had other bulls in mind to draft but they were chosen before he got his turn.

And although he didn’t have any history with Lil 2 Train, Whitehorse didn’t hesitate on his choice.

“I’ve seen this bull around a good bit,” he said. “He’s taken a lot of guys to the top. I watched the way he bucked and I liked what he did.”

Whitehorse said he felt that he played his card right as he was looking to make sure that the guys behind him didn’t surpass him.

Of course, he had to wait for Rafael Henrique dos Santos and Mason Taylor to complete their rides but those two bull riders failed to cover their final draws.

As a result, Whitehorse came out on top accumulating 177.25 points while Santos finished with 174.75 and Taylor had 174.

Contingent on his mental and physical health, Whitehorse said he would like to build off of this for the rest of the season as he’s aiming for a world title.

“We still have a lot of events before the (summer) break and a lot of guys can still make up some ground,” he said. “I’ll do my best to try to gain some ground too, but you have to make sure your mind and body is also locked in.”