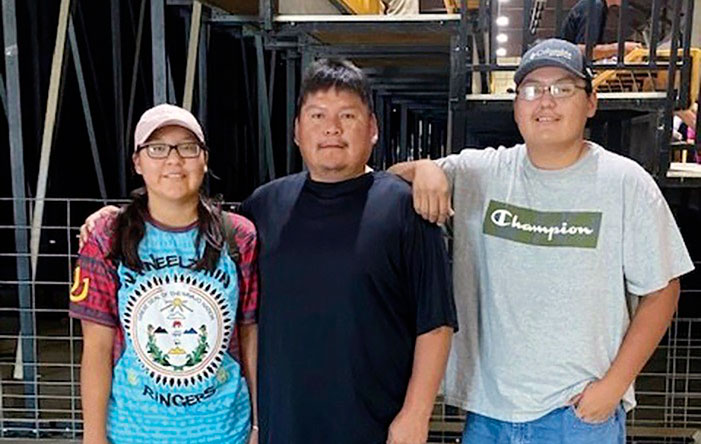 Submitted
The Trujillo family from Torreon, New Mexico competed in the 2021 World Horseshoe Pitching Championship in Winnemucca, Nevada. They are pictured from left to right Kalie Trujillo, Stacey Trujillo and Jacob Trujillo.

Despite the turbulent year, the Trujillo family from Torreon, New Mexico, competed in the 2021 World Horseshoe Pitching Championship in Winnemucca, Nevada.

This was Antone’s third time at the world championship. For everyone else it was their first.

Stacey Trujillo placed eighth in his division. Jacob came close in a tiebreaker, but finished in fourth place. And Kalie made it all the way to second place in the girls’ junior division.

The family’s journey started with a love for playing horseshoe. Antone was a teenager back when he first started playing, just him and a few friends in the backyard.

As the years passed, Antone was active in sports and became a PE teacher and coach. On the side, though, he continued playing horseshoe, which became more popular.

“I like it,” Antone said. “I was just pitching by myself before and then these guys came up and then we formed the club before going to Nevada.

“I’m pushing these communities around here to join us,” he said. “I’m like their coach, showing them how to throw and stuff.”

His first world tournament was sponsored by the National Horseshoe Pitchers Association and was held in St. George, Utah. He went to a second championship and also become a three-time state horseshoe pitching champion for New Mexico.

Then in 2017, his grandson by clan, Stacey Trujillo, and great grandson Jacob decided to try horseshoe pitching. Soon they were having fun, leading to the start of a passion.

“It all started from home,” Stacey Trujillo said. “My shinali, clan-wise, has been pitching horseshoes for 50 years. We sort of watched him pitch, it was interesting and we finally decided to join him. We liked it, so that’s how we started.”

They told their family, friends and neighbors in the area. They competed in friendly games, mostly in backyards, before they started going to tournaments across New Mexico and soon in Arizona and Colorado.

Stacey Trujillo helped start the Na’Neelzhiin Ringers, a local club based in his community. They improved one another’s skills and found tournaments to compete in.

Antone became a prominent member of the club and almost everyone knows him as coach. They had him either as a PE teacher or were coached by him.

Due to the COVID-19 pandemic, although tournaments are still being held, the Trujillos are cautious when they travel.

This year, Kalie Trujillo decided to try the sport, having little else to focus on during lockdowns.

“I didn’t do it before because I thought it was boring,” she said. “But watching my dad and brother do it, I really came to like it. Now I know I can go to world championship and I’m looking forward to do more tournaments.”

Antone encouraged them to start competing in NHPA tournaments so that they could qualify for the world championships, which was always fun for him.

Stacey Trujillo said, “We wanted to make our community known out there, that these guys, these Native Americans, can pitch. To go out there and do our best and make the community known. Put them on the map as they’d say.”

For two weeks, the family played against opponents from across the country. With over 30 categories, the best from each sub-category competed against one another.

Jacob Trujillo said, “I like the competition because there are people who are better than you or the same as you, even the beginners could beat you.

“It is really fun,” he said, “because I never thought of playing other players from all over the country. It was really fun because they were the same percentage as me, which made the game more competitive.”

They made a lot of friends while there, some from California and others from New York. A few Navajos were there as well as other Natives from the central U.S.

Antone was aiming for gold this year but only made it to third place. This doesn’t deter him, though, as he plans to return for the championships next year.

He said, “I’ve been there two times so I wasn’t nervous, I know how it was. My goal was to get the championship in the world, I was going to do it this year but I came up short.

Stacey Trujillo felt he could have done better than eighth place but he and his children said they are just going to keep playing and hone their skills for next year.

Kalie Trujillo was surprised that, after one year of training, she placed as No. 2 in the world with a trophy and a cash prize of $400.

“When I play against other people,” she said, “I don’t always win and I thought there would be better pitchers than me in the championships so I actually was excited when I got second place.”

The family hopes to make the Na’Neelzhiin Ringers club bigger. Kids as young as toddlers can play a variation of the game and elders like Antone, who is nearly 80, is having fun and is staying fit.

Stacey Trujillo said he just wants to meet new people and make friends. That is probably one of the best byproducts of the sport, it brings people together to engage in a friendly competition that people of many ages can enjoy.

“Try out the sport,” he said. “Looking from the outside it may not look interesting to you, but once you get on the inside, it’s very enjoyable sport and making friends is what I enjoy more than pitching shoes.

“You make more friends, meet more people,” he said, “and I’d say, yeah try it out, you never know you might be a natural and we could have a world champ somewhere on the rez.”