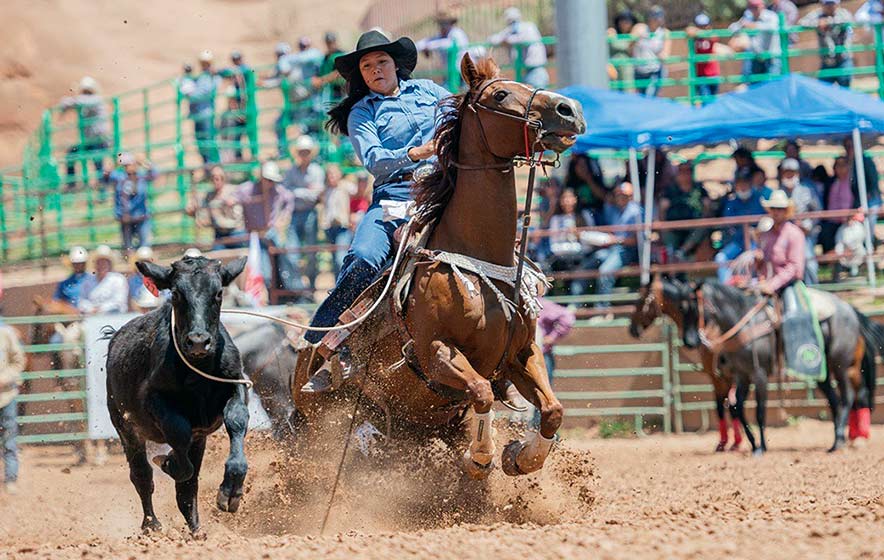 Special to the Times | Vanessa Tom Photos
Erin Etsitty, 17, earned a big payoff by winning the breakaway event at the 99th Annual Gallup Inter-Tribal Indian Ceremonial. Etsitty won her event straight across as she roped two draws in 7.11 seconds.

Tara Seaton has collected so much hardware since she purchased her prized horse, “Gypsy,” two years ago.

The duo captured another title on Sunday afternoon at the 99th edition of the Gallup Inter-Tribal Indian Ceremonial Rodeo.

With Gypsy in autopilot, Seaton toured the cloverleaf barrel-racing pattern in 17.571 seconds during Sunday’s short round performance.

That run was the rodeo’s fastest during the four-day event and coupled with her third place run of 17.862 seconds in the first round, Seaton won the aggregate race in 35.433 seconds.

“She continues to surprise us,” Seaton said of Gypsy, a horse she purchased from Kylie Gilbert in 2019. “She continues to want it and she’s just hungry for it. She knows her job well enough that she doesn’t have to listen to me.

“I’m really blessed to have her and I love her so much,” she said. “She’s taken care of me and she’s made a lot of my dreams come true.”

The Dilkon, Arizona, cowgirl beat out a strong field of competitors in the average race, which included a second-place finish from Brandy Sanchez (35.566) and a third-place showing from Riana James (35.853).

The title on Sunday was Seaton’s second Ceremonial crown as she won this event as an 11-year-old in the late 1980s.

“It feels great to win this rodeo,” Seaton said. “This rodeo is a lot of fun with the atmosphere and the location. When you win the Inter-Tribal Ceremonial you go down as legendary status. I’m really proud to take a piece of this with me, especially with my horse.”

And while Seaton captured her second crown at the prestigious Ceremonial rodeo, 17-year-old Erin Etsitty is becoming one of rodeo’s rising stars in the breakaway event.

Etsitty won her event straight across as she placed first in both the long- and short-go rounds.

“This is pretty big, especially against a lot of good ropers,” the soon-to-be Crownpoint High senior said. “It just shows that all my hard work has paid off and it shows that I could be up there with them.”

In the opening round, Etsitty set the pace with 2.37-second run, edging the 2.66 run turned in by New Mexico Rodeo Association cowgirl LeighAnn Scribner.

In the short round, Etsitty won the round with 4.74 run to guarantee her the average race with a 7.11 aggregate.

Nonetheless, the roping had to be halted midway through the performance as the rodeo judges gathered all the short round qualifiers in an impromptu meeting to discuss how to proceed after they discovered a mishap.

The calf draws, according to rodeo announcer Kyle Tom, were not in the right order based on the draw sheets that were posted before the rodeo.

In other words, the 10th high call-back got the wrong draw, which was meant for the last roper.

Six ropers had completed their runs before the mishap was discovered.

“It happens but we corrected it,” Tom said.

Nevertheless, three ropers had posted better times on their first try as the event started with a clean slate.

“The judges gave us an option of a rerun or just go from there,” Etsitty said. “It didn’t really bother me because I hadn’t roped yet but there were more votes to do a re-rope.”

“I was a little nervous roping with these girls but I had a lot of confidence in myself,” Etsitty said. “I just knew that I had to rope up in the short round.”

With some renewed confidence, Etsitty said she’s looking to earn her ticket to both the INFR and the high school finals.

“It’s going to be my last year in high school so I’m focused on making it to nationals,” she said.

As for the INFR: “I want to go there as a 17-year-old. I think at a young age it can give me a lot of experience.”